'This is a place for animals – not for human beings.'

Lulu Akubaker tells Sky News the converted shipping container she lives in in Ealing is not fit for her family. She was offered it as temporary accommodation by the local council.

The term “refugee” has to be redefined. Mohammedans are not refugees. Moslems who leave their countries to settle behind enemy lines in infidel lands are soldiers of allah.  They are enemy agents and must be treated accordingly. If they claim they are not safe in their own countries, surely another Moslem country like Indonesia can absorb their coreligionists without any fuzz. Australia has no obligation whatsoever to accommodate these people.

Refugees from various countries hold a rally and a hunger strike outside of UNHCR offices in Jakarta on August 20, 2019, protesting Australia’s freeze on resettlement policy AFP
.

Most of the 14,000 refugees in Indonesia are from Afghanistan, Somalia and Myanmar, often living in detention centres or on the streets

Thousands of refugees protested in Indonesia Tuesday, saying they had been stranded in the Southeast Asian nation for years because of Australia’s tighter border policies.

Demonstrations were held in several cities including the capital Jakarta and Makassar on Sulawesi island where some 600 protesters demonstrated in front of the Australian consulate.

They presented a letter to diplomats calling on Canberra to reverse its “inhumane” entry rules for refugees in Indonesia.

Another Mohammedan entitlement whore who made her way to England, demands everything the infidels have, and more:

These people have no claim.

Refugees in Indonesia are tired of uncertainty (sic)

SE Asia News -JAKARTA (AFP) – Thousands of refugees protested in Indonesia Tuesday (Aug 20), saying they had been stranded in the South-east Asian nation for years because of Australia’s tighter

Many had hoped to resettle in neighbouring Australia.

“We… have been held here in this limbo in the absence of our fundamental rights,” the letter said, adding that some refugees were suffering “mental, psychological and behavioural disorders.”

A group of 15 refugees in Jakarta threatened to hold a hunger strike. 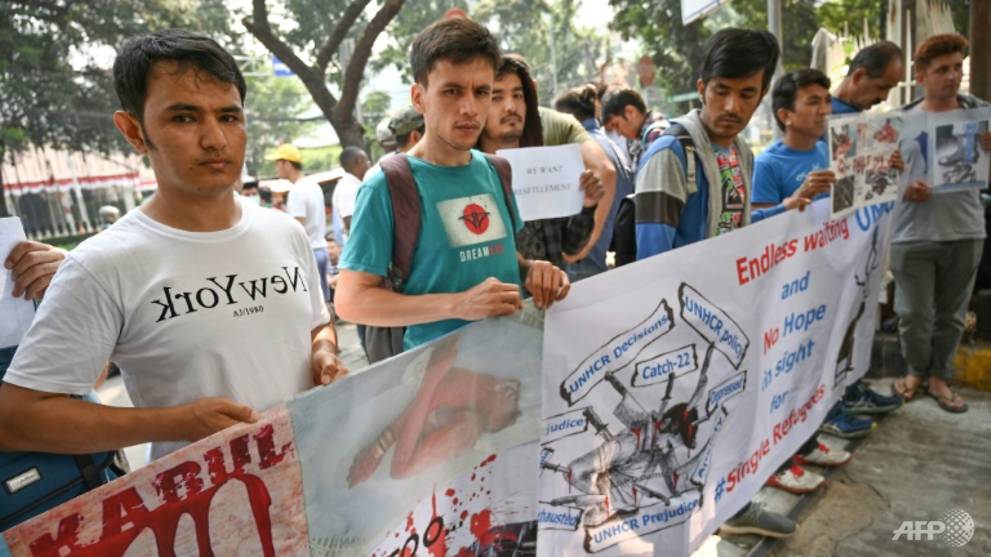 Most of the 14,000 refugees in Indonesia are from Afghanistan, Somalia and Myanmar, often living in detention centres or on the streets.

Indonesia has few resources to deal with refugees and has not ratified the 1951 Refugee Convention, which outlines the rights of displaced people.

“We will continue to protest until our key demand — which is resettlement to a third country — is met,” said Shams, a 20-year-old Afghan refugee, at a protest on Batam island near Singapore.

Australia has come under fire for turning back migrants — including would-be refugees — heading to the country by boat, sending them to offshore detention centres on Papua New Guinea’s Manus Island and in the small Pacific nation of Nauru.

3 thoughts on “Who are these entitlement whores?”