Way back in 2004, Sunday Telegraph columnist Will Cummins warned of Islam’s “black heart”, which he said should be the focus of our fear, rather than its “black face”. He also correctly stated that “all Muslims, like all dogs, share certain characteristics” – among which is the desire to eradicate, one way or another, all those who do not share their faith. The following, absurd denials (taqiyya) in the Guardian by Anas Altikriti don’t change the basic tenets of Islam. The lies only fool those who like to be deceived.

Spreading falsehoods, lies & absurdities are all weapons in the arsenal of jihad against the West. Here, we have Imraan Siddiqi, executive director of the Council on American-Islamic Relations in Arizona, embedded behind enemy lines, spreading  Moslem agitprop. This form of jihad is also known as gaslighting: Iranian President Says America Should ‘Bow Down’ to Iran, Lift Sanctions-We’ll see who does the bowing💥 https://t.co/Y1W7AQdQuP

Well, this is a relief. Now we can all relax. I’m going bowling. Anybody want to come with?

Also, what kind of progress have these Islamic scholars made in convincing Islamic jihadis that they are misunderstanding their peaceful religion?

The Qur’an says: “Against them make ready your strength to the utmost of your power, including steeds of war, to strike terror into the hearts of the enemies of Allah and your enemies…” (8:60)

“And kill them wherever you find them, and drive them out from where they drove you out; persecution is worse than slaughter. But fight them not by the Holy Mosque until they should fight you there; then, if they fight you, kill them — such is the recompense of unbelievers, but if they give over, surely Allah is all-forgiving, all-compassionate. Fight them until there is no persecution and the religion is Allah’s; then if they give over, there shall be no enmity save for evildoers.” (Qur’an 2:191-193)

“We will cast terror into the hearts of those who disbelieve for what they have associated with Allah of which He had not sent down authority. And their refuge will be the Fire, and wretched is the residence of the wrongdoers.” (Qur’an 3:151)

“They wish that you should disbelieve as they disbelieve, and then you would be equal; therefore do not take friends from among them, until they emigrate in the way of Allah; then, if they turn their backs, seize them and kill them wherever you find them; do not take for yourselves any one of them as friend or helper.” (Qur’an 4:89)

“This is the recompense of those who fight against Allah and His Messenger, and hasten about the earth to do corruption there: they shall be killed, or crucified, or their hands and feet shall be struck off on opposite sides; or they shall be exiled from the land. That is a degradation for them in this world; and in the world to come awaits them a mighty chastisement.” (Qur’an 5:33)

“When your Lord was revealing to the angels, ‘I am with you; so confirm the believers. I shall cast terror into the hearts of the unbelievers; so strike the necks, and strike every finger of them!” (Qur’an 8:12)

“Fight them, till there is no persecution and religion is all for Allah; then if they give over, surely Allah sees the things they do.” (Qur’an 8:39)

“Make ready for them whatever force and strings of horses you can, to strike terror into the enemy of Allah and your enemy, and others besides them that you know not; Allah knows them. And whatever you spend in the way of Allah shall be repaid you in full; you will not be wronged.” (Qur’an 8:60)

“Then, when the sacred months are over, kill the idolaters wherever you find them, and take them, and confine them, and lie in wait for them at every place of ambush. But if they repent, and perform the prayer, and pay the alms, then let them go their way; Allah is All-forgiving, All-compassionate.” (Qur’an 9:5)

“Fight those who believe not in Allah and the Last Day and do not forbid what Allah and His Messenger have forbidden, and do not practice the religion of truth, even if they are of the People of the Book — until they pay the jizya with willing submission and feel themselves subdued.” (Qur’an 9:29)

“Allah has bought from the believers their selves and their possessions against the gift of Paradise; they fight in the way of Allah; they kill, and are killed; that is a promise binding upon Allah in the Torah, and the Gospel, and the Koran; and who fulfils his covenant truer than Allah? So rejoice in the bargain you have made with Him; that is the mighty triumph.” (Qur’an 9:111)

“O believers, fight the unbelievers who are near to you; and let them find in you a harshness; and know that Allah is with the godfearing.” (Qur’an 9:123)

“When you meet the unbelievers, strike their necks, then, when you have made wide slaughter among them, tie fast the bonds; then set them free, either by grace or ransom, till the war lays down its loads. So it shall be; and if Allah had willed, He would have avenged Himself upon them; but that He may try some of you by means of others. And those who are slain in the way of Allah, He will not send their works astray.” (Qur’an 47:4)

Meanwhile, “Dr AbdulHamid Badmas of the University of Ilorin, urged Islamic scholars to engage in constructive criticisms while trying to correct societal ills or personalities, rather than being combative or resort to name-calling.”

That’ll be the day. In many years of discussions and debates with Islamic scholars and spokesmen, I’ve never encountered one who didn’t become combative or resort to name-calling. Not even once. One reason why is explained here. 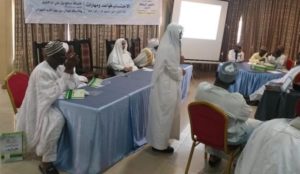 Some Islamic scholars from Saudi Arabia and their Nigerian counterparts have debunked insinuations that Islam breeds terrorism.

They urged Muslims to henceforth embark on the propagation of the religion in a peaceful manner.

The scholars, who gathered in Ilorin, Kwara State, on Tuesday to brainstorm on how to bring about peaceful propagation of Islam, said Muslims should work to change the wrong perception  of  the religion as one being spread through force.

The scholars at the conference, themed, “Correcting the wrongs in society: Its principles and skills,” were of the opinion that some Muslims had wrong perception about the concept of jihad in propagating Islam.

They said jihad was the relocation (Hijrah) of Prophet Muhammad from his birth place of Makkah to Madinah with the sole purpose of giving peace a chance between Islamic faithful and the then unbelievers of Makkah.

This, flight, they claimed, was aimed at promoting peaceful co-existence…

The lead speaker at the conference, Shaykh Ali Abu al-Khayl of the Saudi Arabia Islamic Centre, advised those interested in propagating Islam to do it peacefully and in accordance with the dictates of the Qur’an and traditions of Prophet Muhammad.

While reminding Islamic clerics that “Islam abhors violence in whatever form and guise,” Abu al-Khayl said acting in accordance with the dictates of the Qur’an would ensure peace among Islamic faithful and the adherents of other religions.

In his own submission, the Proprietor of Darul Ikhtab Wa Sunnah, Dr AbdulKadir Solagberu, said the conference was organised to acquaint Islamic scholars with the best ways of how to propagate the religion and enhance peaceful coexistence among people of other faith…

Solagberu also explained that Islam “forbids acts of terrorism in all its ramifications,” urging those who had embraced terrorism as a means of propagating Islam to desist from the ungodly act.

Also speaking, Dr AbdulHamid Badmas of the University of Ilorin, urged Islamic scholars to engage in constructive criticisms while trying to correct societal ills or personalities, rather than being combative or resort to name-calling.