A member of a Rotherham child sex abuse gang has been given extra jail time for trolling one of his victims on Facebook. 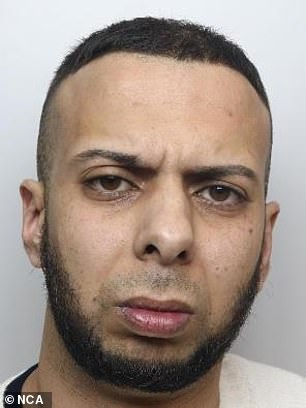 Waseem Khaliq, 35, was convicted of indecent assault and child abduction at Sheffield Crown Court on August 28 after a widespread investigation into grooming gangs in Rotherham

Waseem Khaliq, 35, was convicted of indecent assault and child abduction at Sheffield Crown Court on August 28 after a widespread investigation into grooming gangs in the South Yorkshire town.

But he has now had his sentence extended by three years and nine months after being found guilty of abusing one of his victims on social media and threatening two officers investigating his case.

He said he knew where one of them lived, was close to finding out the address of the other, and hoped they died of cancer or AIDS.

He previously used the false name ‘Andros Simpson’, claiming to be an investigative journalist looking into what was happening in Rotherham, to contact one of his victims.

He also used a Facebook account with that name to make a series of allegations about one of his victims, claiming she was lying and had only agreed to give evidence after the NCA offered her cash and a new house.

Eventually, they stopped when Khaliq was remanded in custody in March 2019.

Hardcore Remain activists are now claiming to “defend democracy” by trying to subvert the will of 17.4m Brits, as expressed in the largest democratic exercise in British history. The hypocrisy of these people knows no bounds – they are well and truly beyond parody!