Former Italian Interior Minister Matteo Salvini points out that at the time he left office, there were no NGO migrant-rescue vessels picking up “refugees” in the Mediterranean, and now there are NINE. 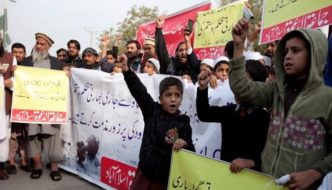 Pakistan: Muslim cleric says jihad against India is obligatory, calls on Muslims to “have the guts” to fight

There will be blowback.  Let’s hope the Indians come to rip his guts out.

Pakistan: Muslims defend practice of child marriage as one of the “tenets of Islam”

Muhammad “married” Aisha when she was six and consummated the ‘marriage’ when she was nine.  He was ‘the perfect man’. He deserves to be emulated by every Muselmaniac on the globe.

So much for President Sisi’s “religious reforms.”

This story is bunk.  It suggests there are ‘radical’ Salafists & ‘moderate’ Muslims who adhere to a different Quran. “Salafists adhere to a strict version of Islam,” the report explains.  “They do not believe in women’s rights and call for women to be clothed from head to toe. The Salafists adopt a hostile stance towards non-Muslims, saying they are not full citizens.” 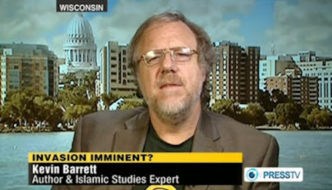 Kevin Barrett is “an American scholar and political commentator,” according to the Islamic Republic of Iran’s house organ, PressTV. He is also, as this article shows, a paranoid conspiracy nut who sees Jews behind everything. And this is no surprise. Barrett is a convert to Islam….

And the Frogs are prepared to give it to them? Are they so eager to be deceived?

Where does the money come from? The perfidious Frogs have been bankrupt for decades! 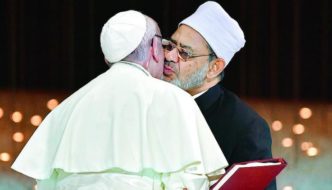 All that this dialogue has led to is Christian leaders being quiet about Muslim persecution of Christians, for fear of offending their dialogue partners. Has this been reciprocated by Muslims? Have Muslim spokesmen stopped being critical of Christians and Christianity? Of course not. The “dialogue” is all dawah on one side and Useful Idiots, eager to be deceived, on the other.