Kathie Zhu cops it. Being an Asian conservative, she’s just been elevated from’racist’ to ‘white supremacist’. Leftoids also have no problem to call Ayaan Ali Hirsi ‘racist’, and when Michelle Malkin is only mentioned, they start frothing from the mouth.

Ex-beauty queen labelled as white supremacist despite being Asian pic.twitter.com/RJyBD6ijVO

Violent protests on the streets of Barcelona. 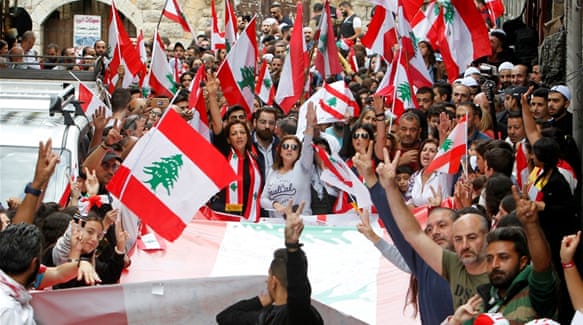 ‘All of them’: Lebanon protesters dig in after Nasrallah’s speech

Nasrallah will not go. We all know that Nasrallah is a bitter clinger and Hezbollah’s got the guns.

Protesters found Nasrallah’s speech to be irrelevant to their goal – much like Aoun’s televised statement the previous day.

“We tell him – everyone means everyone,” a Lebanese woman told Al Jazeera, preferring to stay anonymous.

The “All of them means all of them” chant has been a popular slogan since the protests began on October 17, with demonstrators insisting no politician should be exempted from resignation.

CHINA like the climate-obsessed West, and their virtue-signalling very, very much…

What’s not to love about the useful idiots of the west, who can’t wait to be properly educated in Chinese re-education camps? CLIMATISM posts often begin with poignant quotes from past philosophers, scholars, academics, poets. Not only as a link to the subject matter, but as a guide to past thinking that can engender clues to our current existence and provide insight for future pathways.

THIS author is staunch in the belief that climate change has absolutely nothing to do with the ‘environment’ or “saving the planet”.

IF it did, every climate change activist, such as Extinction Rebellion, would be castigating China for unlimited emissions until 2030, as per their Paris Accord commitment.

TO suggest that China signed the Paris agreement (with their opulent concession) in a deliberate effort to further weaken Western economies, with a keen awareness as to their gullibility and virtue-signalling penchant to appease the loud minority with UNreliables (wind/solar) to “power a clean, green, sustainable future”, would be an understatement.