These mysterious ‘sea-burials’ of Islamic lunatics, what do we really know about them? Where is the evidence that OBL & AB have in fact been roasted by our fearless warriors?

Years after the 2011 Navy SEAL raid on the Abbottabad, Pakistan compound which killed Osama bin Laden, a bombshell investigation published in 2015 by legendary reporter Seymour Hersh debunked key elements of the Obama administration’s narrative of the hit, especially related to the hasty disposal of bin Laden’s body, claimed by the Pentagon to have been buried at sea within 24 hours (after DNA identity confirmation) “in accordance with Islamic tradition”. But according to Hersh’s sources, there was no burial at sea given “there wouldn’t have been much left of bin Laden to put into the sea in any case” as the al-Qaeda leader had been “torn apart with rifle fire”. Instead, pieces of the corpse were “tossed out over the Hindu Kush mountains” by Navy SEALs during the chopper flight out of Pakistan, according to Hersh’s sources. It was but one detail contradicting a broader Washington narrative meant to in part conceal the shocking fact that close American ally Pakistan had for years been hiding Osama bin Laden “in plain sight” — with knowledge at the highest levels of Islamabad intelligence officials — even as US special forces combed the mountains of Afghanistan in a futile manhunt .

And now here we are, days after another epic raid on another world’s #1 terror leader’s compound, with the exact same hasty “burial at sea” story from the Pentagon. In the case of ISIS terror chief Abu Bakr al-Baghdadi’s body, Chairman of the Joint Chiefs of Staff Mark Milley announced Monday during a Pentagon briefing: “The disposal of his [al-Baghdadi’s] remains has been done and is complete and was handled appropriately.” ABC and other outlets were then quick to report that—

“The remains of ISIS leader and founder Abu Bakr al-Baghdadi were disposed at sea after he died during the U.S. military raid that targeted his compound in northwest Syria over the weekend, a U.S. official confirmed Monday.” 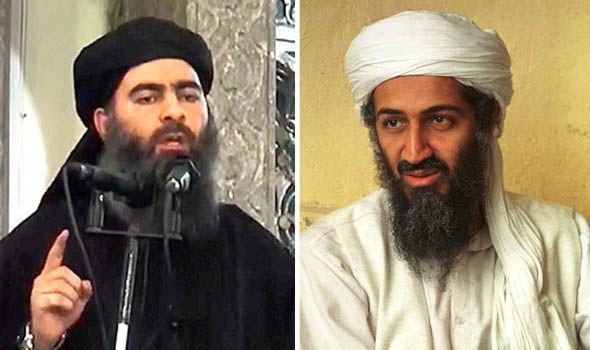 “Authorities would not reveal details about which U.S. Navy ship was used for the burial or in which body of water it took place, but they told ABC News that the procedure was similar to the one used to dispose of the remains of al-Qaeda founder Osama bin Laden,” ABC continued. In bin Laden’s case, the body was taken to the aircraft carrier U.S.S. Carl Vinson, which had been stationed in the North Arabian Sea. Gen. Milley had indicated Monday of Baghdadi that before being disposed of his remains were “transported to a secure facility to confirm his identity with forensic DNA testing.”

The proof, apparently documented by the Pentagon through numerous photos and videos detailing the body confirmation and disposal process, remains classified, with potential limited release of imagery surrounding the raid possibly days away after a “declassification process”. Gen. Milley said of such evidence, “We are not prepared at the time to release those.”

In 2011 there was similar controversy surrounding release of video proof of bin Laden’s death, with the Obama administration never ultimately declassifying any of the footage, or even photos of the body, as they would pose a “national security risk”. Questions, speculation and conspiracy theories then abounded for years afterward — especially given the number of gaping holes in the narrative and unanswered questions — made more pressing and forceful by Seymour Hersh’s London Review of Books deep dive alternate account of what happened.

One obvious question was, what had Osama bin Laden been doing all those years safely ensconce at a million-dollar compound deep in US ally Pakistan, and within walking distance of a major military academy? The Baghdadi raid already has many asking a similar and parallel question: what was the world’s most sought after terrorist doing in Idlib, a mere few miles from the Turkish border?

Good thing Turkey wants to carve out a 30km buffer zone in northeast Syria to target ISIS when Baghdadi was killed 7km from its border on the other end of the country and they apparently didn’t know about it even though they have solid presence on ground.

Of the prior bin Laden episode, Hersh had famously begun his viral in-depth article chronicling the many falsehoods of the 2011 SEAL raid and aftermath as follows:

This is false, as are many other elements of the Obama administration’s account. The White House’s story might have been written by Lewis Carroll: would bin Laden, target of a massive international manhunt, really decide that a resort town forty miles from Islamabad would be the safest place to live and command al-Qaida’s operations? He was hiding in the open. So America said.

And now of the latest Baghdadi episode, we learn the Syrian town of Barisha, where the ISIS chief’s ‘safe house’ was found, later obliterated by US airstrikes was also walking distance from the border of NATO ally Turkey, in a region also with ample Turkish military and its allied forces present on the ground.

It must be remembered that al Qaeda affiliate Hayat Tahrir al-Sham (HTS) has held Idlib province for years, and Baghdadi was there no doubt with the AQ group’s tacit blessing (or at least that of other factions). When a jihadist coalition first took Idlib city from government control in 2015 in an operation spearheaded by HTS and other AQ factions, they were assisted by US and allied intelligence officers working from an ‘operations room’ in southern Turkey.

Crucially, Washington has since Idlib’s complete takeover by what it dubbed ‘moderate rebels’ in 2015 actively prevented the Syrian Army and Russian airpower from returning it to Damascus control.

Lets assume the US did kill #Baghdadi .

– that would mean the US admits they’ve been preventing the Syrian and Russian army from attacking AlQaeda & ISIS in Idlib.

– it could potentially mean Trump’s tired of ISIS being used as an excuse to undermine his pull out.

At times this involved explicit threats from the White House of military retaliation against the Syrian government should pro-Assad forces initiate an assault on Idlib. And yet, the notorious terrorist-in-chief of the Islamic State was found in the very place the US protected from a Syrian Army assault for years.

Like the seemingly made-for-Hollywood script of the 2011 bin Laden operation (this of course later literally became true with Zero Dark Thirty), the Saturday raid and ‘suicide vest detonation’ of Baghdadi raises more questions than any answers hastily supplied by the administration and the Pentagon satisfactorily provide.

The Intercept journalist Glenn Greenwald reminds his readers that “most of what Obama officials, led by John Brennan (now of NBC), said in the first few days about the bin Laden killing turned out to be outright lies — self-serving myths — so we should be very skeptical of Trump WH claims until there’s evidence.”

And writing at retired top Defense Intelligence Agency (DIA) officer Pat Lang’s blog, geopolitics analyst Larry Johnson, who worked previously as a CIA analyst and in the State Department’s Office of Counter-Terrorism, takes a brief tour of some of the pressing unanswered questions which appear eerily similar to the prior bin Laden raid:

The Obama Administration came out with conflicting accounts and required the SEALS who carried out the attack to sign non-disclosure agreements. Why? Because the raid was conducted with the cooperation and knowledge of the Pakistani government; the SEALS faced no guard force; Bin Laden was a cripple unable to get out of bed and was shot so many times by the SEALs…

Al Baghdadi? It is now clear he was protected by someone in Turkey. The Turks knew where he was and, until yesterday, kept him safe. Trump’s actions over the last three weeks with respect to U.S. forces in Syria set the table for this operation. A combination of pressure and incentives confronted Turkey’s President Erdogan and he rolled over.

It is telling that there was not a huge firefight going in. Where was the Baghdadi security team? This is a further indicator that Baghdadi was betrayed by folks he thought were protecting him. Baghdadi fled his house and jumped into a tunnel.

Perhaps in the near future, another Seymour Hersh-style bombshell will expose unanswered questions and mythologies prematurely cementing around this latest raid?

After Sunday and Monday’s flurry of details concerning the Baghdadi raid and death, a number of observers are already counting the unanswered contradictions, which are fast adding up…

The United States has given the remains of Islamic State leader Abu Bakr al-Baghdadi a burial at sea and afforded him religious rites according to Islamic custom after he was killed in a U.S….

so let’s use that what is called a brain…

we have a man, #alBaghdadi, using a suicide-vest, exploded… the tunnel (one entrance, no exit) collapsed, the whole tunnel…

about 15 minutes later technicians cleared the rubble and took dna-samples, even better…

and we are supposed to believe this?

There’s a lot to unpack.

in the dead-end tunnel (only ONE exit, all pressure would go that direction) they were chasing #alBaghdadi very closely. even dogs were chasing him.

and then he detonates his vest. all pressure moves in the direction of the ONE exit. the tunnel collapses. only 1 dog hurt? 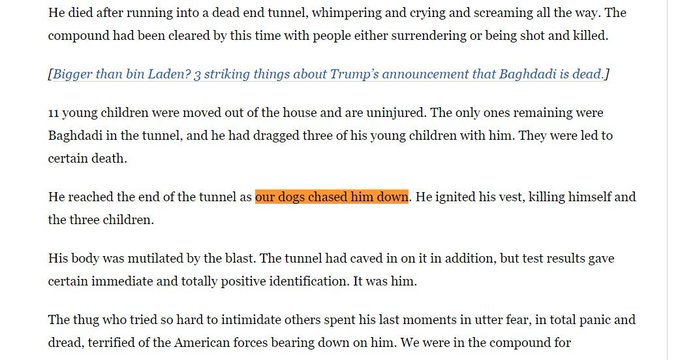 It will be interesting to see if President Trump does indeed follow through with prior statements indicating he’s ready to declassify some of the ‘proof’ related to Baghdadi’s death and details of the operation.

2 thoughts on “These mysterious ‘sea burials’ of terrorist cadavers”