Not. Islamic State terrorists don’t deserve anything. And don’t claim you believe in God. You don’t. You believe in Allah. 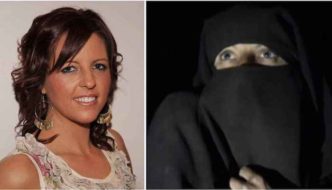 But it’s okay. She promises “I won’t kill anyone.” My latest in FrontPage: Irish authorities really, really want Lisa Smith back in the country, so much so that they’re sending military personnel to the foreign country where she is stranded in order to rescue her. And who is this Lisa Smith? 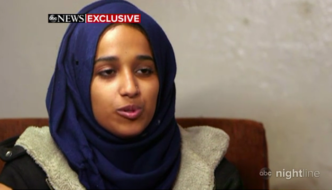 ISIS Muslima who urged Muslims to “spill blood” of Americans wants to return to US: “I want to have my own car”

AL-ROJ CAMP, Syria — An American-born woman who once urged jihadists in America to “go on drivebys, and spill all of their blood,” says she “regrets every single thing” and believes she should be given the option to return to the United States with her young son.

“Anyone that believes in God believes that everyone deserves a second chance, no matter how harmful their sins were,” Hoda Muthana, 25, said in a wide-ranging interview with NBC News from a refugee camp in Syria where she and her 2-year-old son, Adam, live in a tent.

Muthana, who left her home in Alabama to join the Islamic State militant group in 2014 and married three fighters, is one of a number of Western extremists who present a headache to their governments as they want to return home.

Muthana now claims to reject the extremist ideology that she once espoused so freely online, but faces an uphill battle to be allowed back into the U.S. And simply getting by day to day is a struggle, she says.

She says she finds it “hard to get up in the morning” and, despite being moved from the larger al-Hawl refugee camp for her own safety, is scared of retribution from whom she calls the more radical women around her.

She also claimed to be afraid of speaking out, saying it could result in her becoming a target.

“I am risking my life doing these types of interviews,” she said….

Earlier this year, President Donald Trump tweeted that he had instructed Secretary of State Mike Pompeo to refuse Muthana’s re-entry into the U.S.

“Ms. Hoda Muthana is not a U.S. citizen and will not be admitted into the United States,” Pompeo told NBC News earlier this year.

“She’s a terrorist,” he added.

Although she was born in New Jersey, and traveled to Syria with her U.S. passport, the government argue she should never have been considered a citizen in the first place as she was the daughter of a diplomat serving for the Yemeni government at the time.

The children of foreign diplomats based in the U.S. are excluded from the right to citizenship by birthright….

“I’m scared of my son being here,” she said. “We can’t afford bottled water, so we have to drink the tank water and … it causes stomach aches.”

She said that the fumes from the nearby oil fields gives her and her son headaches “every day, every hour almost.”

For her part, Muthana says she just wants to return home with her son.