Seriously, you couldn’t make it up.

And there are lunatics out there cheering them on.

Ilhan Omar is fully committed to join Bernie Sanders and end “Western Imperialism” in our Country.

This is a refugee fighting openly against American values.
And just as bad are the voters cheering to end their own freedoms.#Cody45🐯
pic.twitter.com/q80h6IV2la

Ilhan Omar refused to vote for the resolution to condemn the Armenian genocide. She says that in order to do so, we must also acknowledge the Atlantic slave trade & deaths of native Americans. She simply cannot ever pass up the opportunity to hate on America, @MillerStream says. pic.twitter.com/COkKYwV2GV

Ilhan Omar: ’Beyond Honored’ to Support Bernie Sanders ’Who Will Fight Against Western Imperialism’

The Mohammedan snake & the Jewish (in name only) useful idiot, the unhinged communist Bernie Sanders, remind me of the scorpion & the frog. It’s an old joke, so I presume you know it. 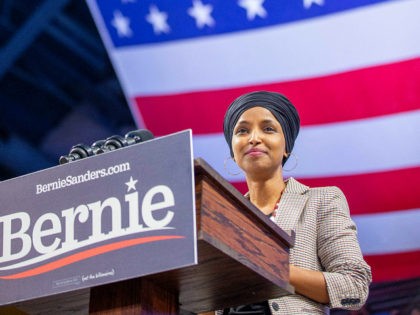