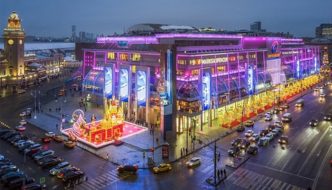 Russia: Five Muslims detained at a shopping mall for plots to commit jihad massacres at school and police station

“The detained leader of the group was named as Idris Alibekov, 23, from the Russian region of Dagestan, who works as a security guard in a Moscow coffee shop.”

A security guard. To have questioned about his perspectives and loyalties before giving him such a job would have been “Islamophobic.”

Damian Wilson
UK Homework Essay: Why All Terrorists Should Be Forgiven…
By asking pupils to write essays on the topic of “All terrorists should be forgiven,” a British school exposed an unwillingness to see that some things are beyond forgiveness – something terror victims’ parents have learned.
.

When Ariana Grande was asked this year about her thoughts on the terrorist attack at her May 2017 gig at the Manchester Arena that left 22 people dead, she was surprisingly reserved. The US pop star said she struggled to talk about the deaths because her thoughts were with the families of those murdered.

“It’s their losses, and so it’s hard to just let it all out without thinking about them reading this and reopening the memory for them,” she said.

Maybe that understanding of the human condition could be explored further by at least one UK school, Bridlington School in East Yorkshire, following a tin-eared homework assignment it recently gave to pupils.The project was: “Imagine that you are a parent of one of the Manchester bombing victims. Write a response to the point of view that: ‘All terrorists should be forgiven.’“

ALSO ON RT.COM‘Absolutely disgusting’: Parents furious after kids asked ‘should all terrorists be forgiven’ in Manchester bombing essay

Okay, that’s one way of looking at it. While not suggesting what that viewpoint should be, the phrasing is itself morally loaded. The defense that followed left no doubts as to what approach was the preferred one, as the headteacher juxtaposed ‘forgiveness’ with ‘hate.’

Conversely, the Year-Eight children could have been asked to explore how it felt to have lost a child in Salman Ramadam Abedi’s devastating and criminal attack from the viewpoint of a bereaved parent.

Maybe look at it from the eyes the family of eight-year-old Saffie Rousos, 14-year-old Eilidh MacLeod or 15-year-old Olivia Campbell-Hardy.Surely as an exercise in empathy, that would be a far more challenging piece of work and would avoid the perils of suggesting that “All terrorists should be forgiven.”

But, in a classic woke backfire, Twitter lit up with angry parents, relatives of bombing victims and others caught up in terrorist atrocities and, before she knew it, head teacher Kate Parker-Randall had a storm on her hands. 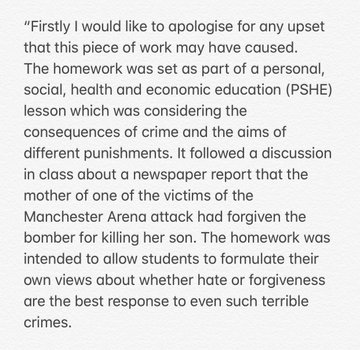 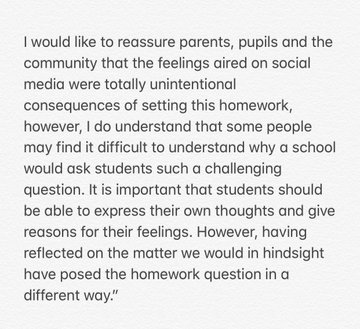 A girl from our village was murdered in this attack. Beyond outright condemnation for his – the terrorist – actions I see no justification for making this a homework topic. The teacher is, at the very kindest interpretation, thoughtless.

NOT good enough. We have all read the wording and that doesn’t hold water. Sackings are called for and they were children NOT young adults. This is a very poor excuse for gross misconduct.

I don’t agree. You have directed the way the child should think by telling them in what direction their input must be.
The country is sick and tired of these forced left wing ideas indoctrinating our young minds.
It’s time for this nonsense to be stopped and/or teachers sacked.

Undeterred, into the melée she strode:

The essay was intended to allow students to formulate their own views about whether hate or forgiveness are the best response to even such terrible crimes.

While she apologized for the upset caused, there was no apology for the tone-deaf approach to setting the homework in the first place because that would suggest that the agenda, the subtle suggestion that terrorists aren’t all that bad really and should be given a break, was wrong.

Head teacher Parker-Randall said the angry online response to the homework was “totally unintentional consequences.” And, surely, the head teacher meant this.

Another, whose son was injured in the Manchester attack, condemned the exercise as “wholly inappropriate.” This debacle was replayed on a similar scale as the ‘homewoke’ task set for pupils at an Oxfordshire school earlier this year, in which they were asked to pen a suicide note from the standpoint of young woman in 1912 as part of their GSCE studies.

A mum, who wrote to the school expressing her concerns, said the exercise was a “massive fail.” Again, the school apologized for “any distress caused” but stopped short of saying it had been wrong to set the exercise.

ALSO ON RT.COMParents outraged as girls ‘too embarrassed to pee’ in London primary school UNISEX TOILETSAny parent with children attending a UK school is hardened to this sort of everyday, unapologetic, right-on nonsense.There’s misguided advice on multiculturalism, school dinners trying to be nutritious, vegan, kosher, and halal all at the same time and children alerted to transgender issues before they have had even rudimentary sex education.

They are lectured about tolerance and forgiveness at such a young age that they simply swallow the whole dish of liberal rubbish without any real questioning because it is a teacher, a respected adult figure, giving it to them.

This half-baked, idealistic theory of one big happy world where everyone’s a winner, no one is allowed to be upset and allowances must be made for even the most egregious ideas, needs to be challenged every time it rears its head.

Maybe that’s something a class can discuss.

2 thoughts on “Are we woke enough to forgive Islamic terrorists who murder our children?”