Somali-Canadian Islamic Preacher Said Rageah: Non-Muslims Disapprove Of Polygyny Because They Want Muslim Women To Be Cheap Goods Like Non-Muslim Women; Muslim Women Who Do Not Want To Share Their Husband Are Not True Believers

On November 16, 2019, a Friday sermon titled “Benefits of Polygyny” by Somali-Canadian Islamic Preacher Said Rageah was uploaded to the Kenya-based ILM TV YouTube channel. Sheikh Rageah said that women who do not want to allow their husband to have another wife are not true believers because Islam expects Muslims to make sacrifices for the sake of Allah, that it is the nature of men to pursue multiple sexual partners and therefore to have multiple wives, and that people who are against Islam disapprove of polygyny because they want Muslim women to be “cheap goods” like non-Muslim women. He said that polygyny benefits women because there are more women in the world than men and because it helps distribute the responsibilities of fulfilling the rights of husbands and caring for children among multiple wives. In addition, Sheikh Rageah said that mothers who do not allow their daughters to marry a man who has other wives are preventing the marriage for selfish reasons because they don’t want their husbands to marry another wife, as well. Furthermore, he said that if one Muslim woman commits fornication because of weak faith or because no man has proposed to her, then the entire Muslim nation shares in her sin. At multiple points throughout the sermon, Sheikh Rageah said that the men in the audience need not be concerned about what their wives might think about the content of the sermon. He also joked: “If you are [asking] how come [I] only [have] one wife… [Polygyny] is illegal in Canada, but the moment I cross the border, I am at Allah’s service.”

To view the clip of Somali-Canadian Islamic Preacher Said Rageah on MEMRI TV, click here or below.

“We Have More Women Than Men, So As Soon As Polygyny Comes In, We Are Benefiting Women” Because “The Responsibility Of A Wife Will Be Lightened”

Said Rageah: “Praise be to Allah, you are smiling because you know the title of the sermon, which is polygyny – having more than one wife. Of course, for those of you who are afraid of their wives, they are not here – so we don’t have to worry about them, mashallah.

“The few of you who did not know the title of this sermon, are looking around, making sure their wives are not looking or peeking from the windows. Don’t be afraid, no one is going to report other than the live stream that you see from the cameras.

“In our time, we have more women than men. Whether we accept that or not, we have more girls. As fathers we have more girls than boys. So as soon as polygyny comes in, we are benefiting women, we are benefiting that portion of the society. We are not taking their rights. Not only that, the responsibility of a wife will be lightened, because the same husband, coming home every night, demands [things] he wants to be taken care of, he wants this right, he wants that… when you have [multiple wives], there are more chances for [each wife] to relax, to look after herself, to take care of herself, to make sure that this is a time for herself…”

“What Kind Of A Sister Would Claim She Is A Believer, Yet Would Not Allow Her Husband To Take Care Of Another Wife?”

“Islam is not about jilbab and niqab, and abaya – Islam is about actions!

“If you want to be [among] the people of righteousness and piety, then you have got to give up, for the sake of Allah, what you love. And I know women, they love their husbands.

“Men… Allah did not create [them] like women. A wife, when she gets married, she settles down, because she is like earth. But a man is a hunter. You married the most beautiful wife, she is right here, but as soon as she says: ‘I do,’ you will say: ‘Who is next?'”

“People who are against Islam and Muslims don’t want [polygyny] because they want our daughters to be as cheap as theirs. They want to have our daughters for one-night stands and to move on.

“When you see our daughters dancing for these guys who don’t care about their religion because they are from a different religion, and who just want to have fun for the night… That’s what they want… One of my brothers, said: ‘Allah be praised, I remember when a [non-Muslim] Kenyan would not dare to look at a Somali sister, or a Muslim sister… [He] would not dare to look at them, let alone take them for the night.’ Now they have become cheap goods, anybody can grab them. Because in here, they change everything in them… They said: ‘You can’t be a second wife, but you can be my girl. You can’t be halal for somebody, but you can be haram for me.’ 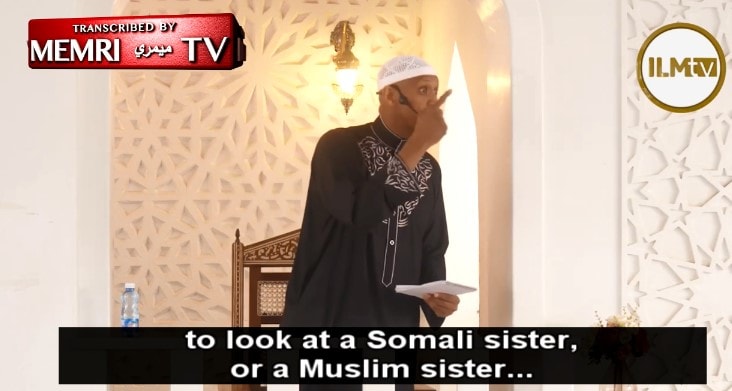 “Mothers and fathers who do not allow their daughters to be another wife, or the wife of someone who has more wives, are responsible [for this].

“And if you are saying: ‘How come you, Sheikh Said, only has one wife?’ I am a Canadian… It is illegal in Canada, but the moment I cross the border, I am at the service of Allah…”