Infidel laws do not apply to the soldiers of allah. Oppressed minorities from Pakistan & Banglatrah must not be given shelter in India. Only Moslems are oppressed & are entitled to migrate. What’s the world coming to! What are these kuffars thinking!

Many Indian states ‘will not implement Modi’s citizenship law’

Kerala’s Pinarayi Vijayan writes to 11 of his counterparts, urging them to unite and coordinate efforts against the law. 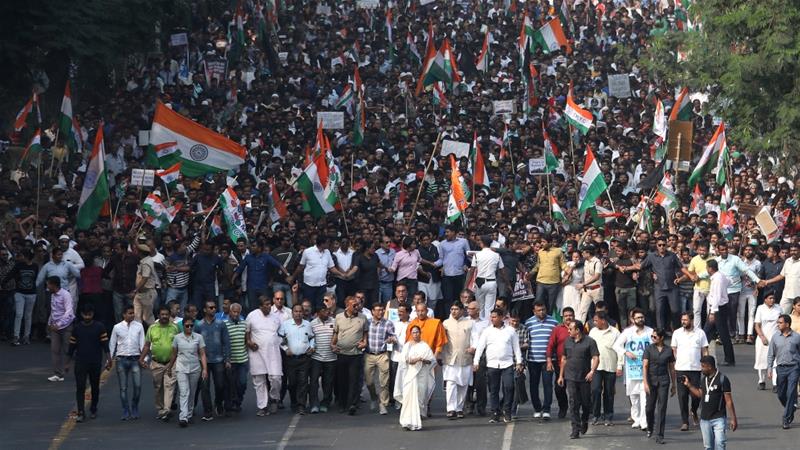 More on the Indian situation:

New Delhi, India – Political challenges for Prime Minister Narendra Modi over the passage of the Citizenship Amendment Act (CAA) are mounting with a number of Indian states saying they will not implement the contentious law seen as anti-Muslim, and backing nationwide protests against it.

“Wrote to 11 Chief Ministers requesting intervention on CAA. Why we resist?” Vijayan posted on Twitter, along with a copy of the letter he sent.

Why are so many Indians (Mohammedans) protesting against the citizenship law?

“Apprehensions have arisen among large sections of our society consequent to the Citizenship Amendment Act, 2019. The need of the hour is unity among all Indians wishing to protect democracy and secularism,” his letter said.

Meanwhile, 27 people have died in nearly a month of protests against the law, with at least 19 of those deaths reported from Uttar Pradesh state, governed by a hardline Hindu nationalist belonging to Modi’s Bharatiya Janata Party (BJP).

Fear and fury over CAA and NRC

Pushed by the right-wing BJP and passed by parliament last month, CAA will give Indian citizenship to “persecuted” minorities – Hindus, Sikhs, Buddhists, Jains, Parsis and Christians – from India‘s neighbours Bangladesh, Afghanistan and Pakistan, but blocks naturalisation for Muslims.

Opposition parties and legal experts argue the law is discriminatory since it singles out Muslims in an officially secular nation of 1.3 billion people, nearly 15 percent of whom are Muslim, who fear the law is aimed at marginalising them. 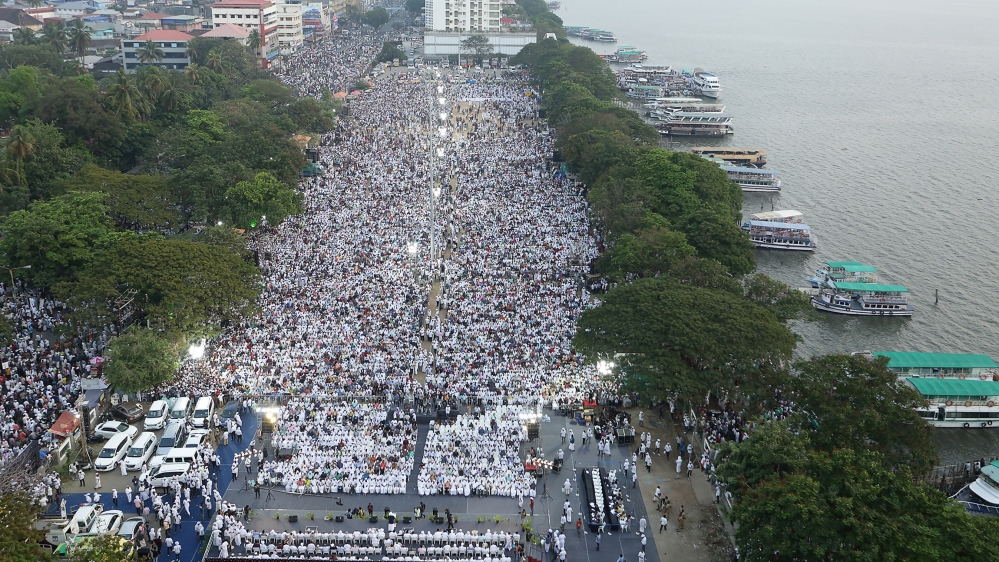 A demonstration organised by various Muslim groups in Kerala’s Kochi city against the citizenship law [AFP]
.

The fears have been compounded with a planned National Register of Citizens (NRC), a count of India’s citizens which the BJP wants to conduct across the country, triggering anxieties over the documents people would need to prove their citizenship.

NRC was originally an exercise exclusive to the ethnically-diverse northeastern state of Assam, where a movement against allowing any undocumented migrant, irrespective of religion, to settle there has been ongoing for decades.

Critics say the moves are part of a Hindu supremacist agenda pushed by Modi since he came to power nearly six years ago.

“Down with fascism” and “Save constitution” are some of the most popular slogans in more than three weeks of protests, which large numbers of Muslims have participated in.

Multiple petitions challenging the new law as unconstitutional have been filed in India’s Supreme Court, which will hear some of those pleas on January 22.

Many states refuse to implement CAA

Several among the 11 states Vijayan wrote to have already expressed their opposition to the citizenship law and publicly declared they will not implement it.

West Bengal’s Chief Minister Mamata Banerjee, a staunch Modi critic, has led several mass rallies in her state against the law. Last week, she said she will not implement CAA “as long as I am alive”.

“In 2020, ordinary citizens, including students, are headlining this movement,” Derek O’Brien of the Trinamool Congress party which governs West Bengal, told Al Jazeera.

“This is a people’s movement to save the idea of India.”

Punjab, Rajasthan and Madhya Pradesh – governed by the main opposition Congress party – also announced they will not impose the new law in their states.

The law has also been rejected in the western state of Maharashtra, where the Congress is part of a coalition government led by Chief Minister Uddhav Thackeray, a former BJP ally whose Shiv Sena party had voted in favour of the citizenship bill in the lower house of India’s parliament.

“The fact is NRC and CAA cannot be decoupled. Together they are a manifestation of deliberate exclusionary politics to marginalise the Muslim community and effectively disenfranchise them,” Congress spokesman Sanjay Jha told Al Jazeera.

“We shall contest this segregationist politics of the BJP in the courts and on public squares all over the country,” he said, saying he hoped the Supreme Court would strike the CAA down.

MA Baby, member of the ruling Communist Party of India (Marxist) party in Kerala, said India’s constitution does not permit discrimination based on religion.

“It’s a wicked idea floated by the RSS which is controlling the BJP to foster a religious divide within India,” he told Al Jazeera, referring to Rashtriya Swayamsevak Sangh (National Association of Volunteers), BJP’s far-right mentor which draws its inspiration from Nazi-era Germany. 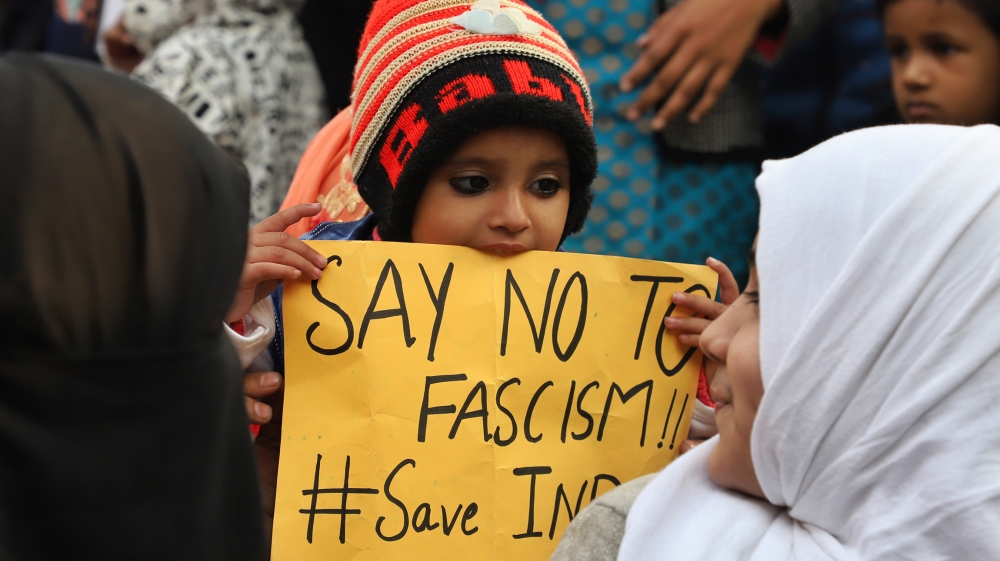 Modi’s government, meanwhile, remains defiant, with the federal law minister this week saying the states have a “constitutional duty” to implement laws passed by the parliament.

At a rally in Rajasthan on Friday, Modi’s close aide and India’s Home Minister Amit Shah said: “Even if all these [opposition] parties come together, BJP will not move back even an inch on this issue of CAA.”

“Most parties like the Congress and Left have themselves demanded citizenship for persecuted religious minorities from Pakistan and Bangladesh,” he said, adding that his party has launched an “outreach programme” to spread awareness about the law and to “expose the lies of the opposition”.

When asked about conflicting statements made by Modi and Shah about a nationwide NRC, Rao said: “There is no discussion on NRC at present. Whenever it is planned, it will only be taken up in consultation with all stakeholders including the state governments.”

But Sanjay Singh of the Aam Aadmi Party, which governs the national capital territory of Delhi, said the law is only intended “to disturb the country”.

“There are lot of people in the country who are against this law and that should be a reason for the central government to revoke or rethink this,” he told Al Jazeera. 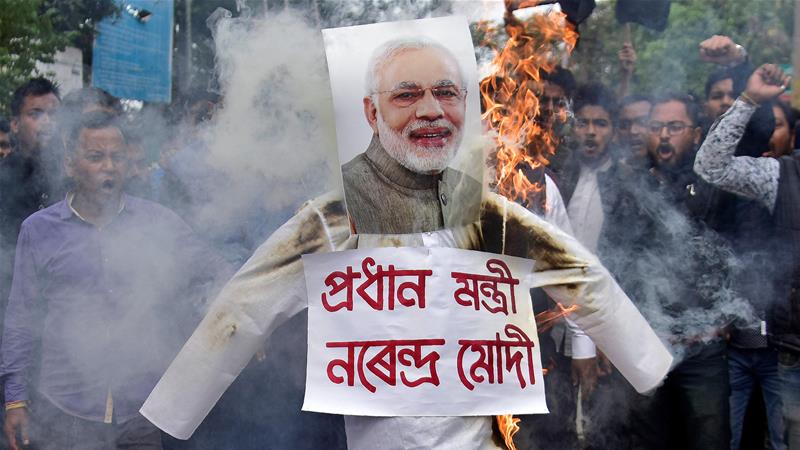 One thought on “India: Mohammedans revolt against deportation of illegal coreligionists”