Indonesia is descending into the pit of Islamization, and this is now evident on its campuses:

Walking through Indonesian college campuses today, it’s easy to spot the young women clad head-to-toe in black amongst the sea of students wearing jeans and brightly colored batik. These women in black, along with many of their male classmates, have recently “hijrahed.” In Arabic, the word hijrah literally means, “to migrate or emigrate,” and is traditionally used to describe the Prophet Muhammad’s migration from Mecca to Medina. In Indonesia, the term has come to encompass a variety of movements and ideologies in which nominal Muslims are “born again,” and begin to seriously study religion.”

There are other signals pointing to the Islamization of the country. Indonesia deployed 200,000 police to protect Christmas celebrations from Islamic jihad massacres, and on the island of West Sumatra, Christians were banned from Christmas home celebrations.

It doesn’t bode well for Indonesia, which was once deemed to be “moderate.” As Jihad Watch reported in September, “born-again” Muslims have been driving social changes, encouraging Muslim-targeted housing and Sharia banking.

The “highly conservative head of the Indonesian Ulama Council,” Ma’ruf Ami, is said to wield “unprecedented influence” in the country. He defines his own version of “moderate Islam” that he wants for Indonesia. He stated at a seminar organized by the Indonesian Mosque Council in Jakarta: “What ulemas like us must do is build a Muslim brotherhood, a national brotherhood and then a brotherhood of humanity.” His declaration about “brotherhood for humanity” reveals his adherence to the Islamic tenet of global conquest. Saudi Arabia, meanwhile, has been quietly spreading its “brand of puritanical Islam” in Indonesia. In fact, the quiet impact of Saudi Arabia in spreading Wahhabism has been massive, and contrasts with its public image of undergoing a reformation, which has the naïve fooled.

According to the article in Foreign Policy, Extremism Is Riyadh’s Top Export, Indonesian leaders are well aware of “Saudi Arabia’s true motives and were only superficially playing along”:

They didn’t want to accept Saudi money at all, but they had no choice. They were desperate for funds for schools, clothes, and even health care. They thought they could control the impact of Saudi ideology, preventing it from taking root in the culture. What emboldened them was the notion that Wahhabi traditions were foreign to their local culture and thus something that would never resonate with local people. They were wrong……Islam was in the process of becoming homogenized, rendered more synonymous with Wahhabism and Arab culture generally.

According to the New York Times:

“In Indonesia, Salafi ideology has penetrated urban and rural, civil servants and villagers,” said Din Wahid, a theologian at Syarif Hidayatullah State Islamic University. “They see corruption all around them and say that it is only Shariah and restoring a caliphate that will be able to fix society.”

The New York Times article has further noted that in Indonesia, Saudi Arabia is above questioning:

Perhaps the most influential Saudi investment in Indonesia is the Institute for the Study of Islam and Arabic, known by the Indonesian acronym, Lipia, where classes are segregated by gender and teach the fundamentalist Wahhabi theology that dominates in Saudi Arabia.

“Even though Indonesian Islam is a syncretic, cultural Islam, we are taught that anything from Saudi, the country of Mecca and Medina, must be authentic and good,” said Ulil Abshar Abdalla, the coordinator of the Liberal Islam Network, who studied at Lipia.

That same premise that Saudi Arabia’s teachings about Islam are above reproach has entered Western countries. 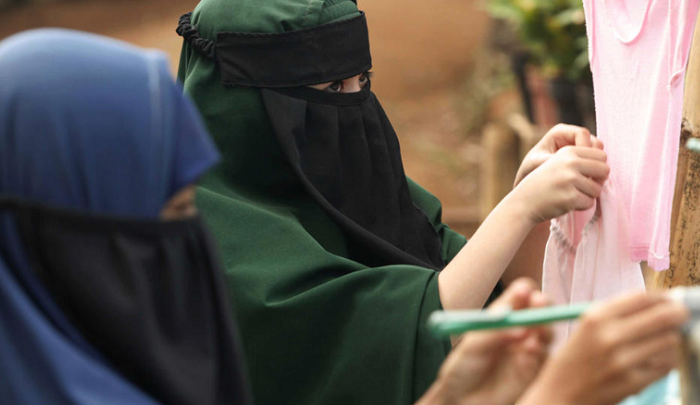 “The Changing Face of Indonesian Islam,” by Carter Banker, The Diplomat, December 24, 2019:

Walking through Indonesian college campuses today, it’s easy to spot the young women clad head-to-toe in black amongst the sea of students wearing jeans and brightly colored batik. These women in black, along with many of their male classmates, have recently “hijrahed.” In Arabic, the word hijrah literally means, “to migrate or emigrate,” and is traditionally used to describe the Prophet Muhammad’s migration from Mecca to Medina. In Indonesia, the term has come to encompass a variety of movements and ideologies in which nominal Muslims are “born again,” and begin to seriously study religion. The movements are typically composed of young people who have little-to-no prior religious background and seek to become religious experts immediately, often switching out their modern clothes for long, dark, loose clothing for women, and ankle length pants and a beard for men, within the span of just a few months.

HTI is the Indonesian branch of the global Hizbut Tahrir organization, which was banned by the Indonesian government in 2017 because its goal to form an Islamic Caliphate was deemed to be against the pluralist state ideology, Pancasila, which lists democracy as a founding principle of the Republic of Indonesia. HTI and its branches in other countries are not affiliated with the Islamic State (IS), and HTI members disagree with IS’s use of violence to achieve its goals.

The Tarbiyah movement is affiliated with the Islamist political party PKS and is inspired by Muslim Brotherhood ideology.

Salafism is a movement/ideology whose most prevalent faction is characterized by nonviolent Islamic puritanism (other types of Salafism include political and jihadi, but these appear in much smaller numbers). Its adherents typically eschew television, music, and interaction between the sexes.

While their specific ideologies differ, these organizations and movements all claim to embrace nonviolence, but also adopt a very narrow interpretation of Islam that is anti-pluralist. Salafi Instagram handles and other social media platforms are filled with memes and articles defending the use of the term kafir, a word that means “non-Muslim,” but is usually interpreted as a pejorative term. They also discourage interaction with kafirs. An article on a popular Salafi website muslim.or.id claims it is forbidden for followers of the Sunnah (the habits and sayings of the Prophet Muhammad) to initiate a greeting with a non-Muslim. Furthermore, if a kafir begins the greeting, Salafis are instructed as follows: “Their greetings are obviously filled with bad prayers to us. So we answer wa ‘alaikum (and so to you).”

For many years, Islamic thinking in Indonesia was dominated by two organizations: Muhammadiyah and Nahdlatul Ulama (NU). Muhammadiyah was founded in 1912 by religious thinkers who had studied in the Arabian Peninsula and wanted to rid Indonesian Islam of its cultural influences, which date back to the era when Hindu, Buddhist, and Animist beliefs dominated the archipelago. NU was founded in 1926 as a reaction against Muhammadiyah’s purge of tradition and has grown into the largest Muslim organization in Indonesia, and indeed the world, claiming between 30 and 50 million members (depending on the source). Because of their long history and sheer size, Islam promoted by NU and Muhammadiyah is typically considered mainstream, and NU in particular has for years been labeled as “tolerant” and “moderate” Islam by Westerners. Indeed a popular refrain heard from Western journalists and scholars is that Indonesian Islam could be an antidote to the conservative and jihadist Islamic movements found in the Middle East and around the world.

One thought on “Indonesia: “Islamic revival” sees hijrah movements flourishing on campus, thanks to the Saudis”