Poisonous Moslem of the Day Photo: The organization who makes these models will not release their raw data for those models, just like the Hockey Stick fraudster, Mann, who sued Mark Steyn in a Vancouver court and lost because he also refused to produce the data he used to make that model. Which makes one wonder how accurate these models are, and what is the actual motive behind them.

British Prime Minister Boris “BoJo” Johnson is no longer in ICU, but is still hospitalized with the ChiCom flu. Meanwhile, as many as 150 members of the Saudi royal family are thought to be afflicted with the disease. Also, the EU has agreed to a €500 billion coronavirus rescue package. All through January, Tedros and his minions vouched for Chinese authorities’ lies about the coronavirus, misleading other nations’ health authorities into underestimating the threat.

Trump is right: the rotten World Health Organisation should be reformed or abolished

It shouldn’t just be on hold. We should stop paying third world thugs, period.

WHO director hits back at Trump threat to defund agency

In other news, two boats carrying at least 25 illegal migrants were intercepted crossing the English Channel to the UK.

Migrant boat arrivals increase six-fold in 2019 after UK paid France £6m to stop them
.
Near-record number of migrants make Channel crossing in one day
.
Those on board identified themselves as Iraqi, Iranian and Afghan.
Eight migrants who said they were children are undergoing “age assessments”, while others were taken to Dover and transferred to immigration officials. Reprehensible headline by Politico. Dr. Raoult is a world-renowned epidemiologist who is gathering critical data that is saving lives worldwide: “Macron meets with controversial chloroquine doctor touted by Trump” – POLITICO If there’s a declared pandemic by June 2020, which they already declared – they don’t have to pay the investors.

But if no pandemic was declared – they’d have to pay the investors.

Over $425 million worth of such bonds, which bet against a global outbreak of infectious diseases will default if WHO declares the coronavirus a pandemic, were sold by the World Bank in its first-ever issuance of catastrophe bonds. In the event of no pandemic, investors would be paid a healthy annualized return.

In other words, it’s a created virus and scam to fleece investors AND wreak havoc on world economies so as to raise $320 million in bonds with no pay back.

Investors betting big against catastrophic diseases are watching the World Health Organization closely as insurance bonds tied to whether the organization labels COVID-19 a pandemic are set to mature in June. 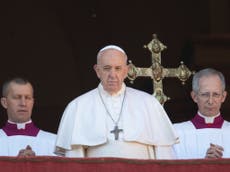