‘We don’t want to shoot you mate’: How police begged a white Muslim convert to stand down but were forced to shoot him after he ran at them with a hatchet

One of two brothers shot by police at a Victorian campground threatened to behead officers and said he wanted to become a martyr.

Footage played to a Melbourne court shows 19-year-old Joel Clavell being shot while charging at police with an axe on June 12 last year.

His older brother, Joshua Clavell, was also shot after ramming a police car and running at officers with a knife at the Barnawartha North campground.

Joel Clavell called police ‘dogs’ and ‘mutts’, said he wanted them to drop their guns so he could chop their heads off and become a martyr.

The Netherlands: Mosque says “get used to it” to citizens who complain about prayer calls
They always say that. Once the mosque is established, it’s over.

Central London’s iconic Trocadero could become a mosque for 1,000 worshipers

Every mosque is a victory mosque. This iconic building is a trophy.

Hussein  Obama populated the US government with communists

Why did it take so long to be revealed?

After decades of fraud, bullying and relentless propaganda, the tide is turning against the global warming crowd.
– XYZ
Leftist heads are exploding today as The Australian reports a scientific study showing decreasing solar activity will cause global cooling in coming years. 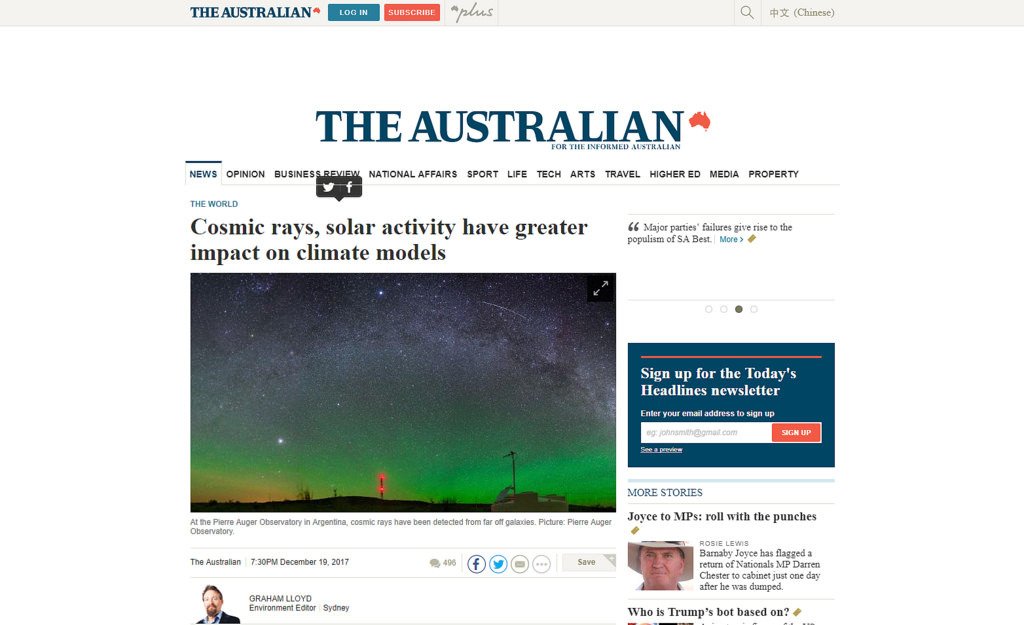 The Australian has run a piece by Environment Editor Graham Lloyd reporting on recent scientific research published out of the Danish National Space Institute. The research shows that solar cycles have a much greater impact on climate than previously acknowledged.

Importantly, the research also highlights the crucial role that cosmic rays play in increasing cloud cover on the planet. This is vitally important for us to understand today.

That’s because, as I’ve written about for XYZ before, our solar system entered a Grand Solar Minimum of reduced solar energy output at the beginning of 2017.

When solar activity falls, the increased cloud cover caused by these cosmic rays exacerbates the cooling cycle, causes greater rainfall and increases the intensity of storms. All of these are devastating for agriculture, and the complex food supply lines large cities rely on.

Even more worryingly, Grand Solar Minima correspond to increased volcanic and earthquake activity. Although the causes of this correlation are still contested by establishment scientists, the link is clear. Large-scale volcanic eruptions, most common during transition periods like the one we’re in, send up ash into the atmosphere which further exacerbates the cooling.

The lead author of the study, Professor Henrik Svensmark, has long been a critic of the establishment’s obsession with carbon-driven, anthropogenic climate change. He points out that the study, published in the journal Nature Communications, helps explain the cooling trend which has been in evidence over the last 20 years.

‘’It gives a physical foundation to the large body of empirical evidence showing that solar activity is reflected in variations in Earth’s climate,” a media statement accompanying the scientific report said.

“For example, the Medieval Warm Period around year 1000AD and the cold period in the Little Ice Age 1300-1900 AD both fits changes in solar activity,” it said.

“Finally we have the last piece of the puzzle of why the particles from space are important for climate on Earth,” it said.

This is YUGE. Prof Svensmark and his team are here referencing the Maunder and Wolf Minima, 300 and 600 years ago respectively, which correlated with the Little Ice Age and culminated in 1816 in the Year Without a Summer.

1816 also marked the end of the turmoil of the French Revolution and Napoleonic Wars in Europe, ushering in a century of economic expansion, peace and the first wave of globalisation as warming returned.

This is the warming period constantly referred to by global warming fanatics, and it’s coming to an end.

The only people who can’t see this are leftists. It really is a mental disorder.

Prof Svensmark’s study makes a significant contribution to our understanding of how heliogenic global cooling operates by identifying the mechanism through which cosmic rays cause increased cloud cover. Cosmic rays increase as the sun’s protective magnetic field shrinks, allowing cosmic rays from outside the solar system to bombard the planets.

“The study reveals how atmospheric ions, produced by the energetic cosmic rays raining down through the atmosphere, helps the growth and formation of cloud condensation nuclei — the seeds necessary for forming clouds in the atmosphere.

“Since clouds are essential for the solar energy reaching the surface of the Earth the implications are huge for our understanding of why climate has varied in the past and also for a future climate changes,” the statement said.

Professor Svensmark said it had until now wrongly been assumed that small additional nucleated aerosols would not grow and become cloud condensation nuclei, since no mechanism was known to achieve this.

The research team tested its ideas experimentally in a large cloud chamber.

Data was taken over a period of two years with total 3100 hours of data sampling.

Professor Svensmark said the new results gave a physical foundation to the large body of empirical evidence showing that Solar [sic] activity is reflected in variations in Earth’s climate.”

So I guess we will be hearing a mea culpa from the Intergovernmental Panel on Climate Change sometime soon? The billions taken from the private sector and everyday citizens by government and redistributed to crooked scientists, fake ‘green’ companies and the corrupt academic establishment will be handed back?

Perhaps the money could be given to the everyday Aussies who are being savaged by unnecessarily high energy prices while our geopolitical rivals build power stations at a rapid clip?

Even Prof Svensmark couldn’t resist a dig at the corrupt ‘climate scientists’ and their lying media supporters.

Professor Svensmark said the findings may explain why temperatures had been increasing slower than expected over the last 20 years, because now solar activity is going down and cosmic rays flux is high.

“All this is something that should be looked more into, but now we have a very important solar mechanism,” he said.

When the famines start and the chaos breaks out, let’s make sure we remember who hid this truth from the people of the world as part of their agenda for depopulation, global socialism and economic tyranny.