This is important, very important. All modern day scholars of Islam seem to have reached agreement that dhimmies are “second-class citizens.” That is wrong. The dhimmi is not a citizen;  he has no rights at all and his existence depends entirely on his usefulness to the ruling Mohammedans. He can be put to death at any time, his wife & children can be sold into slavery, any injustice can be inflicted on the kuffar without repercussions. The following article explains it well. 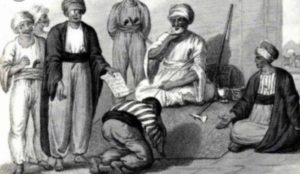 A dhimmi is a qualifying infidel who has turned down an “invitation” to accept Islam, for which refusal the Muslims, by command of Allah, not to mention personal affront, should kill him. As an act of gracious magnanimity and mercy, though, the Islamic state “protects” such a qualifying infidel by conditionally suspending Allah’s command to kill him. The infidel “qualifies” for dhimmitude on the ground of being one of what Islam terms “people of the Book,” i.e., people who, “have a Sacred Book or something that could have been a Book.” Note that by the logic of Islam, while Jews, Christians and Zoroastrians can be offered dhimmitude, Sikhs cannot be “people of the Book,” since their sacred text, the Guru Granth Sahib, dates from later than the Qur’an, which was the “final revelation.” According to Shari’a, the Guru Granth Sahib, “neither [is] nor could be a Book.” Sikhs, therefore, do not “qualify” for dhimmitude.

It is a commonplace in the West to describe dhimmis as “second-class citizens.” This might be because the only frame of reference that we generally have for conceptualising those statutorily disadvantaged in our society is citizenship, enfranchisement and human rights. But dhimmitude does not arise out of a context of citizenship, a social accomplishment of post-barbarian societies, reaching its mature form during the Enlightenment. Dhimmis are not second-class citizens or any kind of citizens at all. Citizenship is not a barbarian concept.

Dhimmitude is the Islamic manifestation of the barbarian practice of extracting idle benefit or pleasure from someone whose life is already forfeit. The Maya were a barbarian culture, while the Nazis descended into barbarism. Both Mel Gibson, in his Apocalypto, set in 16th century Yucatán, Mexico, and Steven Spielberg, in his Schindler’s List, set in the Kraków Ghetto, Nazi-occupied Poland, plausibly depict forfeited lives in fictional scenes of target practice on living humans, such people being, in a true sense, living dead. In dhimmitude, it is a question of how long the dhimmi can totter between dying and converting to Islam, without breaking any of the oppressive dhimma (the “protection” contract) stipulations, at which point he would automatically be killed anyway.

The closest modern analogue to the dhimmi is not the second-class citizen, but the nonperson, especially where some benefit is extracted from the non-person’s continued existence, such as working to death, e.g., in a mine or slave-labour camp, sex-slavery, galley-slavery, entertainment, e.g., hand-to-hand combat to the death, or medical experimentation. One of the most comfortable and least recognisable contemporary forms of non-personhood is membership of the French Foreign Legion, given that Legionnaires are not permitted to surrender their weapons under any circumstances. They are compelled to fight to the death.

Dhimmitude is a barbaric form of living non-existence. The essence of living non-existence is that the person’s death is a non-event. In the perverted value-system of Shari’a, the dhimmi is a “protected person,” under the Islamic state. Shari’a stipulates the terms of dhimmitude and, as barbarian deals go, these are pretty generous. The Shari’a manual, Reliance of the Traveller, does give the impression of dhimmitude as a stable, if extremely burdensome, condition, although the specifics are sometimes down to the whim of the caliph. It would seem as if the law is clear and once a “qualifying” infidel has opted to “pay the jizya and feel themselves subdued,” the dhimmi will know where he stands and can settle down to a life of familiar daily abuse without surprises. All he needs to do is avoid any wrong moves and he is free to live out his life as a dhimmi, even practising his religion — sort of.

However, Islam is not driven by how it treats dhimmis, nor is Muslim behaviour determined by it. Islam exists to destroy all religions and subjugate all humanity to itself. “Strive in the cause of Allah until all religion is for Allah alone,” is not set aside by the dhimma. The offer of “protection” is made to the infidel man. His wives and daughters remain potential broodmares for Muslims, who can abduct them willy-nilly, rape them, convert them to Islam and marry them off to Muslims. But if Muslims are known for anything, then it is that no agreement they make with infidels is sacrosanct. The dhimma is no exception.

Muslim apologists tend to describe dhimmis as “protected peoples,” citing the stipulations of Shari’a. But the Muslim is not only superior to the infidel, he is a supremacist, i.e., he must dominate and abundantly demonstrate that domination in his day-to-day encounters with infidels. What chance that in the real world, the Muslim is going to restrain himself for the sake of a dhimmi? The Muslim alone sets out the terms of the “protection contract.”

Regardless of what the Shari’a stipulates, Muslim hatred towards and contempt for the infidel is a fundamental Islamic principle that has little room for the legal niceties of the dhimma, especially since a dhimmi cannot testify in his own defence against a Muslim, and can lose his life for the temerity of defending himself against Muslim physical assault, even by running away. The dhimmi is compelled to stand or lie there, and beg for forgiveness while the blows and kicks rain down on him. The dhimmi must scrupulously observe the terms of this contract while the Muslim can basically ignore it. For the dhimmi to do otherwise is to bring on his own murder. By no definition can such a condition be described as citizenship — of whatever class.

The “protection” lavished on the dhimmi is designed to “persuade” him to do the decent thing and not take lifelong advantage of the Muslims’ generosity. Eventually, when the dhimmis are thoroughly impoverished and broken by the conditions of their dhimmitude, especially from the jizya poll tax extracted in exchange for this “protection,” the Muslims tire of indulging the dhimmi’s obstinacy and kill them anyway.

A dhimmi’s death is a non-event, as is that of a nonperson. This is where to start when conceptualising the dhimmi. Once the dhimmi dies, there is no formal recognition that he has ever lived. The Chinese conception of animals is that they are “moving objects,” which underlies the appalling cruelty to which animals are subjected in China. Non-personhood is the human equivalent of “moving objects.”

While dhimmitude is not a free-for-all condition, this is only so because the possibility of the non-person adopting Islam remains for as long as he remains alive. But all infidels, whether dhimmis or not, are already subhuman in the eyes of Muslims, the infidel’s life being worth less than that of the Muslim. The dhimmi’s death, therefore, is not about the dhimmi’s life ending, but about the Muslim’s effort to spread Islam, in this instance, coming to an end with nothing to show for it.

Citizenship is an entirely different social form, premised as it is on the autonomous individual. The partial curtailment of the citizen’s rights and legal protections can result in such a citizen ending up in a “second-class” position vis-à-vis other citizens. Even where such curtailment of rights and freedoms might be severe, as in statutory or customary racial or gender discrimination, such severity, nonetheless, does not render the citizen a nonperson.

Seeing dhimmitude as merely second-class citizenship greatly incapacitates those facing the prospect of dhimmitude, such as, currently, the citizens of the West. It would be far more helpful to examine the adequacy of our own modern frame of reference when attempting to conceptualise a social form particular to a pre-mediaeval barbarian society.