Over 30 Obama officials are due to testify in court over #ObamaGate.   –In case you were wondering what these protests were distracting us from.
.
Al BeBeeCeera beclowns itself again:
. London police squads were chased through the streets and pelted with missiles by crowds yelling “run, piggy.” …35 officers suffered injuries…

Black Lives Matter are the new Far-Left, polarising Britain like never before

Delingpole: Black Lives Matter and Antifa in London – Where Are the Grown Ups? 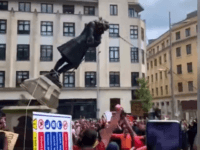