No Moslem is a refugee. All Moslems are soldiers of allah.
.
BREITBART.COM 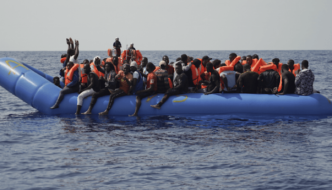 The hijra into Europe continues. Even during the coronavirus lockdown, hordes of illegal Muslim migrants have arrived in Britain from France via the English Channel. Migrants have also swarmed into Italy and overwhelmed the Island of Lampedusa. And who is to blame?

One migrant died and eight others were injured when hundreds of Africans attempted to storm the border fence between Morocco and the Spanish enclave of Melilla in North Africa. The man who died fell off the top of the 16-foot fence.
20 August 2020 The truth about the migrant crisis isn’t what you think Home Secretary Priti Patel visited the port of Dover last week to gee up the beleaguered Border Force and offer words of encouragement to the British people.
.
‘It is our mission and objective to break this route up,’ she told her personal cameraman and tightly-controlled media team.
Priti hot footed it out of the docks as soon as the PR stunt was over. Job done for another day.
.
More fake promises of stronger borders by a Conservative party who seem unable to control anything, let alone a porous expanse of water separating England from France.
.
The reality is we all know what’s going on. Not from the mainstream media who eagerly line the dock side waiting for exhausted looking women and children being brought off the boats.
We all know the reality from alternative media and independent reporters that have filled the void.
I’ve covered the migrant crisis for more than five years and worked on the ground in more than eight countries.
I’ve visited dozens of refugee camps and illegal migrant encampments.
.
I’ve spent hundreds of hours with refugees and migrants listening to their stories and trying to make sense of this crisis.
The picture I see in the news does not reflect my experience and that of many others.
.
Over my time on the refugee trail, I’ve noticed that the majority of people making the journey to Europe are males between the age of 18-35.
.
In fact I’d estimate up to 85 per cent of the migrant influx is comprised of young men.
.
I always found it difficult to turn on the TV and see women clutching their infants and fathers weeping as they landed on the shores of Greece.
.
Difficult because of the humanitarian empathy that wells up within us all, but also difficult because it’s not a reality I’m seeing on the ground.
.
Migrants in the Calais ‘jungle’
What I found over five years across the Balkans and Europe is not what’s written about in the papers, it’s not the stuff that wins journalism awards.
.
It’s the painful reality that the refugee crisis is more complex than we are led to believe.
‘Everyone who needs asylum should be given a safe place,’ a leftist volunteer once told me. That’s true and it’s a nice notion to live life by, however the reality is starkly different.
What I’ve witnessed over the years is people, who by their own admission are not refugees, taking advantage of European gullibility and generosity.
.
In 2015, when Merkel declared anyone who came will be welcomed in Germany, the door was truly opened.
A green light lit up across the Middle East, Africa and other more far-flung parts of the world.
.
With the aid of Google and volunteer organisations people knew exactly what type of persecution, sexual persuasion, religious or ethnic identity would secure them a ticket into Europe.
I don’t mean to be flippant on the subject of fraudulent asylum claims but it seems all too common.
.
In warehouse refugee camps I’ve witnessed men from Egypt studying maps of Damascus to fabricate their identity.
I’ve seen North Africans all claim to be Syrians and coincidently all from Damascus.
.
Migrants in Belgrade heading for a new life in Europe
Around a fire on the Serbian-Croatian border I’ve shared cigarettes and fruit with middle class, metropolitan Iranians who are taking their chances on reaching Europe. ‘We will say we are Christians and suffer problems because of that.
.
I have had friends who say they’re gay and it worked. The funny thing was when he arrived in Berlin they housed him with other gay refugees.’
.
Countless stories that don’t fit the narrative pushed on the evening telly fall by the way side.
Violence, drugs, alcohol, disease and criminality are the bleak reality I saw on Europe’s borders.
.
I shared the hardship to an extent to understand what truly drives people to pack up everything and come to Europe.
Thousands and thousands of genuine refugees suffer in the Balkan barbed wire.
.
More lie restless in stifling, overcrowded camps waiting for their turn to continue onwards to Europe.
In the West, we know all of this yet we neglect to have the difficult conversations that are vital moving forwards.
How do we protect public health with an influx of uncontrolled migration?
.
How do we address the elephant in the room: integration?
What about family reunification?
The numbers are vast!
.
If Germany has six million new arrivals then how many more will come if their families are allowed to join them?
How will Europe cope with all these people?
The British public are alarmed by what they see in Dover. Not out of a knee jerk, racist reaction but out of a genuine sense of concern.
People have the right to ask questions:
Where are these people going to live?
What about the school placements?
The doctor’s surgeries?
The opportunities to work in an already crumbling economy?
The reality is we all know what we are hearing about the refugee crisis is not the full picture.
It’s not as clear cut as the London bubble would have us believe.
Across the world, there are hundreds of millions who would qualify for EU asylum.
.
The question we are all going to have to ask is how much is enough? How many people can the West really take?
.
Edward Crawford is a freelance photojournalist and videographer
.
Spectator by Edward Crawford
20 August 2020, 12:31pm
Winds Of Jihad Music
My Allah Is Better
Muslim Woman
Can't We All Just Get Along
Abu Hamza
Tollerance
The Imam
Philistine Child
Harry The Taliban
The Shoe Bomber
Never Do A Thing Like That
Zarqawi