How did this POS ever get a permit to reside in Australia? 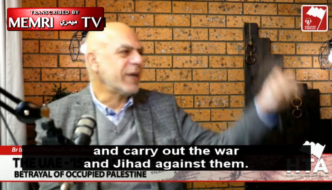 Australia: Muslim leader says Israelis ‘are waiting for the Islamic nation to carry out the jihad against them’

“This state – they call it a state – by Allah, it is so weak, that every one of them has his second passport, [his] original passport, and they are waiting for the Islamic nation to stand up and carry out the war and Jihad against them.”

Once again, a supporter of the “Palestinians” invokes Islam and jihad when discussing Israel. Yet mainstream Western analysts continue to ignore Islam in examining the Israeli/ “Palestinian” conflict. This is to the severe detriment of their analysis, as well as of their peace plans, as The Palestinian Delusion shows in detail.

“Australian Islamist Leader Ismail Al-Wahwah: While Arab Rulers Are Thinking About Peace With Israel, The Islamic Nation Is Thinking About Jihad; We Could Free Palestine Within Two Weeks,” MEMRI, August 19, 2020:

One thought on “Australia: al Wahwah Wants to “Free Palestine Within Two Weeks””