Arson works. By burning the camp down, the Mohammedans made sure that bleeding hearts would appear and take them in. 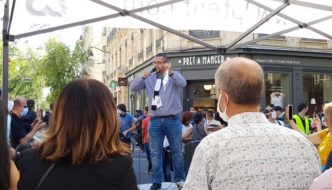 Muslim leader says ‘Islam is the second religion in France. Those who do not like us have only to leave France.’

The duty to assimilate and accept the values of the other culture belongs to French non-Muslims, not to Muslims. It is always this way.

50 -60 years ago, proud Frenchmen would have lynched this punk in the street. Now they stand there being told to piss off or be subjugated. How did this happen? Who robbed them of their will to live?

"Enrichment" in Greece: Women are no loner Safe

After a Pakistani migrant sexually assaults a Greek woman, violent clashes broke out!

30 Greek citizens took on about 200 Pakistanis, armed with wooden AND metal objects.

Six air conditioners exploded almost simultaneously in a mosque in Bangladesh during Friday prayers, killing 17 people and injuring 20 more. The explosions are thought to have been caused by a leak in a basement gas line.

This is just sad.