CNN was trying to sell Aslan as a “moderate”, not a raving Mohammedan Terrorist. He showed us what a clown-show they all are.

Reza Aslan is an agitprop for the  Iranian regime. He is also a former CNN contributor, author of There is no God but God, threatening to use violence & burn down our country if President Trump nominates a replacement for RBG. He comes from a mullah family in Iran.

Reza Aslan: ‘If they even TRY to replace RBG we burn the entire f**king thing down’

We’ve been warning about this guy for years. Now he is openly calling for sedition and violence. But this is really no surprise. Reza Aslan, well-known cannibal, is a former CNN host who was fired for prematurely revealing that they’re a propaganda ministry, not a news outlet. He also exhorted readers in his last book to take the advice of the oldest and most celebrated self-improvement coach, Satan: “take a lesson from Adam and Eve and eat the forbidden fruit. Do not fear God. You are God.” But besides this hubris and arrogance, Reza Aslan for years been active with organizations linked to violent jihad terror groups. A reminder:  (Below the fold) Reza Aslan is a Board member of a lobbying group for the bloodthirsty and genocidally antisemitic Iranian regime; tried to pass off Iran’s genocidally-minded former President Mahmoud Ahmadinejad as a liberal reformer; called on the U.S. Government to negotiate with Ahmadinejad himself, as well as with the jihad terror group Hamas; praised the jihad terror group Hizballah as “the most dynamic political and social organization in Lebanon”; praised also the anti-Semitic, misogynist, Islamic supremacist Muslim Brotherhood, which is dedicated in its own words, according to a captured internal document, to “eliminating and destroying Western civilization from within”; and has also applauded and called for the forcible shutdown of the free speech of those who hates — a quintessentially thuggish and fascist impulse.

Aslan has on several occasions come out strongly for Hamas. He denies that he is doing so, of course, but in practically the same breath energetically parrots Hamas propaganda about Israel targeting civilians, even claiming, risibly, that there is no evidence that Hamas is using human shields. When he says such things, he can trust that the mainstream media has not reported obvious examples of Hamas’s lies and disinformation, much less the fact that Hamas openly avows that it uses human shields so as to provoke civilian casualties that can be used to demonize Israel. Here is an account of his exchange with Bill Maher — even Maher found Aslan’s cheerleading for Hamas tough to swallow.

Aslan is also notoriously hate-filled and has shown a propensity for violence before. He was in the thick of the media savaging of a group of Kentucky high school students were accosted by a Native American activist; Aslan called for violence against the student most prominently featured in circulating videos of the incident. When Dinesh D’Souza called him out on it, Aslan doubled down by saying he wanted to assault D’Souza: 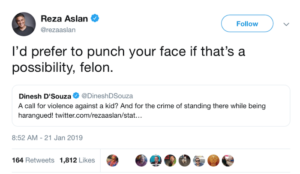 This shouldn’t come as any surprise to those who are familiar with Aslan’s rancid public career. That this sinister jihad enabler was ever given a mainstream platform is a dispiriting sign of the times. His show on CNN was devoted to showing other religions as violent and hateful, and Islam as benign and peaceful. Also, Aslan is a Board member of the National Iranian American Council (NIAC). NIAC has been established in court as a lobbying group for the Islamic Republic of Iran. Said Michael Rubin: “Jamal Abdi, NIAC’s policy director, now appears to push aside any pretense that NIAC is something other than Iran’s lobby. Speaking at the forthcoming ‘Expose AIPAC’ conference, Abdi is featured on the ‘Training: Constituent Lobbying for Iran’ panel. Oops.” Iranian freedom activist Hassan Daioleslam “documented over a two-year period that NIAC is a front group lobbying on behalf of the Iranian regime.” NIAC had to pay him nearly $200,000 in legal fees after they sued him for defamation over his accusation that they were a front group for the mullahs, and lost. Yet Aslan remains on their Board.

Meanwhile, despite his increasingly obvious Islamic heterodoxy, Aslan remains popular with Muslim Brotherhood-linked groups in the U.S.: he has also spoken at events sponsored by the Muslim Students Association, a Brotherhood group, as well as at an event co-sponsored by the Los Angeles chapter of the Hamas-linked Council on American-Islamic Relations (CAIR). Doubtless they recognize that he shares their overall agenda.

Not surprisingly, after a trip to Israel he lied about being threatened by Shin Bet.

Aslan is as stupid as he is evil. It’s also worth noting that despite being hailed as a great intellect, Aslan isn’t actually very bright. He is, in fact, a borderline imbecile who frequently states howlingly false errors of fact, but is, never called out for them by his friends in the establishment media. He has made the ridiculous claim that the idea of resurrection “simply doesn’t exist in Judaism,” despite numerous passages to the contrary in the Hebrew Scriptures. He has also referred to “the reincarnation, which Christianity talks about” — although he later claimed that one was a “typo.” In yet another howler he later insisted was a “typo,” he claimed that the Biblical story of Noah was barely four verses long — which he then corrected to forty, but that was wrong again, as it is 89 verses long. Aslan claimed that the “founding philosophy of the Jesuits” was “the preferential option for the poor,” when in reality, that phrase wasn’t even coined until 1968. He called Turkey the second most populous Muslim country, when it is actually the eighth most populous Muslim country. He thinks Pope Pius XI, who issued the anti-fascist encyclical Mit Brennender Sorge, was a fascist. He thinks Marx and Freud “gave birth to the Enlightenment,” when it ended in the late 18th century, before either of them were born. He claims that “the very first thing that Muhammad did was outlaw slavery,” when in fact Muhammad bought slaves, took female captives as sex slaves, and owned slaves until his death. He thinks Ethiopia and Eritrea are in Central Africa.

A “renowned religious scholar” such as Reza Aslan should not make such elementary mistakes. But this is, of course, the man who writes “than” for “then”; apparently thinks the Latin word “et” is an abbreviation; and writes “clown’s” for “clowns.”

Supreme Court Justice Ruth Bader Ginsburg passed away Friday night at the age of 87 due to complications from metastatic pancreatic cancer.

Moments after news broke of her passing, Senate Majority Leader Mitch McConnell pledged a full Senate vote on the nominee of President Donald Trump’s choosing with the election looming less than 50 days away.

After erupting into a historic outbreak of civil unrest this summer that claimed the lives of more than 30 people while trashing minority businesses, launching violent assaults on state and federal police officers, and carrying out more than $1 billion in property damage in the name of social justice, radical left-wing activists are now planning to do it all again if the president executes his mandated White House authority to appoint a new Supreme Court justice.

“If they even TRY to replace RBG we burn the entire fucking thing down,” wrote liberal writer Reza Aslan.

“We’re shutting this country down if Trump and McConnell try to ram through an appointment before the election,” warned Writers Guild of America President Beau Willimon.

“If Mitch McConnell jams someone through, which he will, there will be riots,” threatened Laura Bassett whose work has been published in GQ Magazine and the Washington Post…

3 thoughts on “Reza Aslan: ‘If they even TRY to replace RBG we burn the entire f**king thing down’”