“What is Macron’s problem with Islam and Muslims? He needs mental health treatment,” Erdogan said.

France has recalled its ambassador to Turkey after ‘unacceptable’ comments by President Erdogan.

France on Saturday said it was recalling its envoy to Turkey for consultations after comments by Turkish President Recep Tayyip Erdogan suggesting French counterpart Emmanuel Macron needed a mental health check-up that Paris condemned as unacceptable.

France and its NATO ally are at loggerheads over a range of issues including maritime rights in the eastern Mediterranean, Libya, Syria and the escalating conflict between Armenia and Azerbaijan over Nagorno-Karabakh. 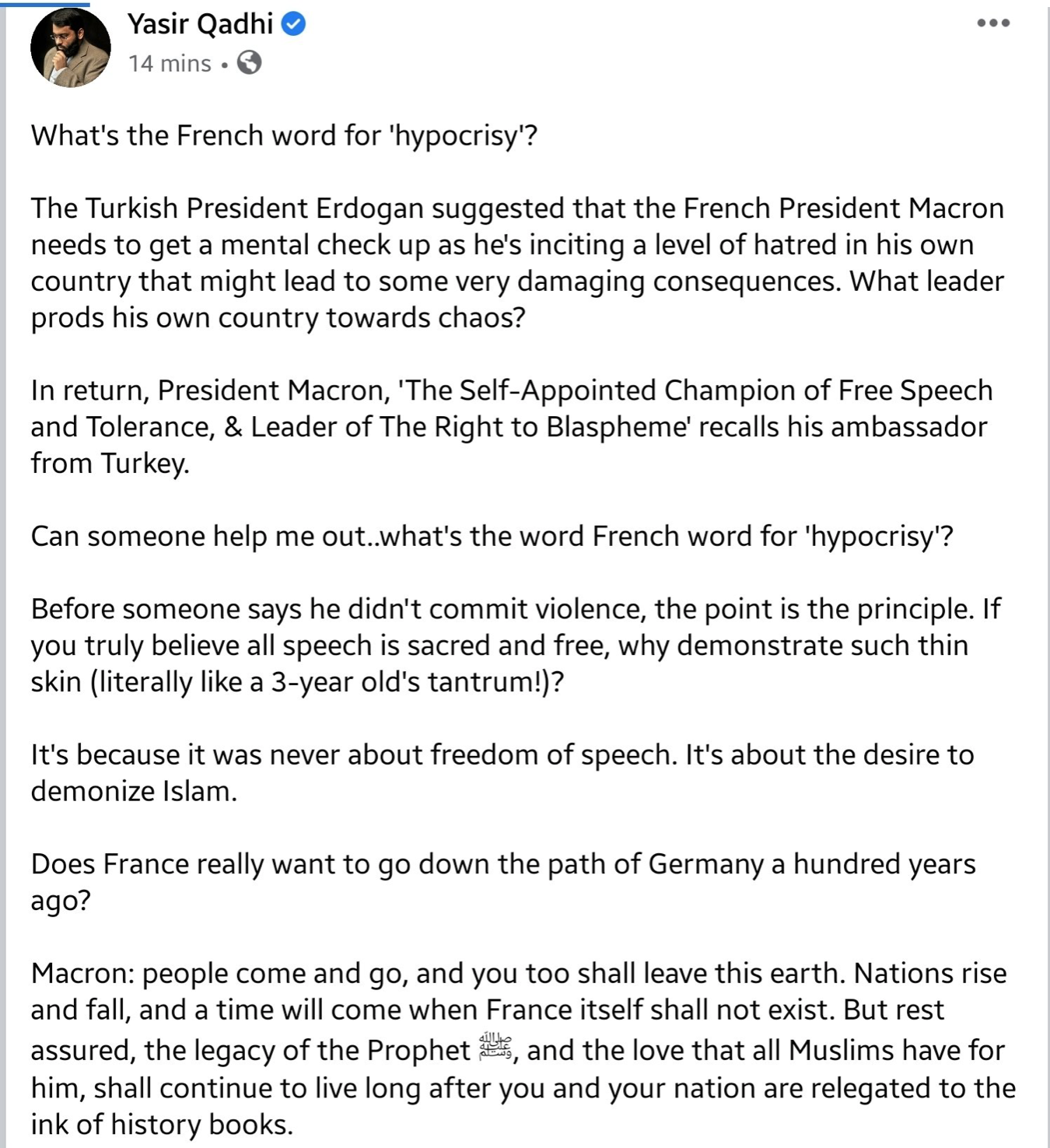 Tell me what Yasir Qadhi is threatening here!

But Ankara has now been particularly incensed by a campaign championed by Mr Macron to protect France’s secular values against radical Islam, a debate given new impetus by the murder this month of a teacher who showed his class a cartoon of the prophet Mohammed.

“What can one say about a head of state who treats millions of members from different faith groups this way: first of all, have mental checks,” Mr Erdogan said in a televised address in the central Anatolian city of Kayseri.

“What’s the problem of the individual called Macron with Islam and with the Muslims?” Mr Erdogan asked.

“Macron needs mental treatment,” Mr Erdogan added, while indicating he did not expect the French leader to win a new mandate in 2022 elections.

In a highly unusual move, a French presidential official said that the French ambassador to Turkey was being recalled from Ankara for consultations and would meet Mr Macron to discuss the situation in the wake of Mr Erdogan’s outburst.

“President Erdogan’s comments are unacceptable. Excess and rudeness are not a method. We demand that Erdogan change the course of his policy because it is dangerous in every respect,” the official told AFP.

The Elysee official, who asked not to be named, also said that France had noted “the absence of messages of condolence and support” from the Turkish president after the beheading of teacher Samuel Paty outside Paris.

The official also expressed concern over calls by Ankara for a boycott of French goods. A Republican Guard holds a portrait of Samuel Paty in the courtyard of the Sorbonne university during a national memorial event, in Paris.

Mr Macron this month described Islam as a religion “in crisis” worldwide and said the government would present a bill in December to strengthen a 1905 law that officially separated church and state in France.

He announced stricter oversight of schooling and better control over foreign funding of mosques.

But the debate over the role of Islam in France has hit a new intensity after the beheading of Mr Paty, which prosecutors say was carried out by an 18-year-old Chechen who had contact with a jihadist in Syria.

Turkey is a majority Muslim but secular country which is a part of NATO but not the EU, where its membership bid has stalled for decades over a range of disputes.

“You are constantly picking on Erdogan. This will not earn you anything,” said the Turkish leader.

“There will be elections (in France) … We will see your (Macron’s) fate. I don’t think he has a long way to go. Why? He has not achieved anything for France and he should do for himself.” The other new rift between the two leaders is over Nagorno-Karabakh – a majority ethnic Armenian breakaway region inside Azerbaijan, which declared independence as the USSR fell, sparking a war in the early 1990s that claimed 30,000 lives.

Turkey is strongly backing Azerbaijan in the conflict but has denied allegations by Macron that Ankara has sent hundreds of Syrian militia fighters to help Azerbaijan.

Mr Erdogan on Saturday accused France – which along with Russia and the United States co-chairs the Minsk Group tasked with resolving the conflict – of “being behind the disasters and the occupations in Azerbaijan”. Nagorno-Karabakh: The decades-old conflict between Armenia and Azerbaijan explained

He also repeated previous claims that France, which has a strong Armenian community, is arming Yerevan. “You think you will restore peace with the arms you are sending to Armenians. You cannot because you are not honest.”

But the Elysee official said that Mr Erdogan had two months to reply to the demands for a change in stance and that it ends its “dangerous adventures” in the eastern Mediterranean and “irresponsible conduct” over Karabakh.

“Measures need to be taken by the end of the year,” said the official.