With the Charlie Hebdo images now being projected onto buildings in France, it seems free speech is being encouraged by the authorities. If so, this must apply to everyone – and selective prosecutions must be stopped.

French establishment figures of all stripes are echoing Macron’s message. Manuel Valls, who was prime minister during the first Charlie Hebdo attack, has called on all French media to republish the caricatures.

France: Macron vs the Turkish Despot 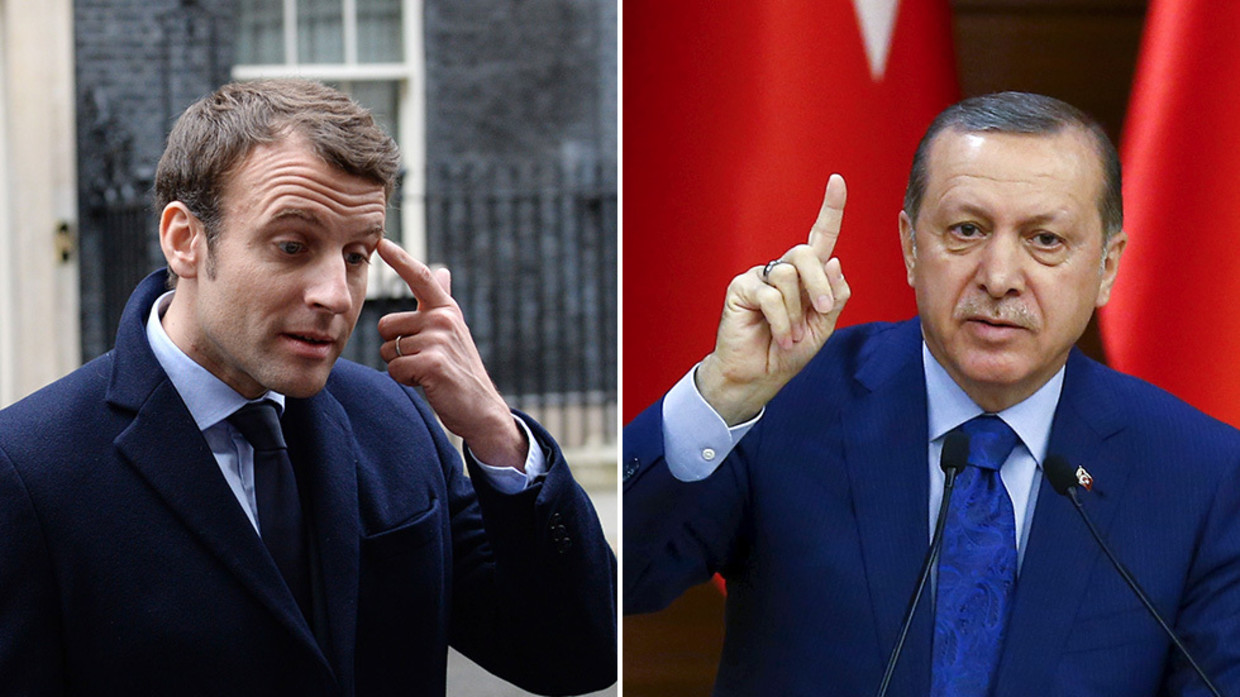 Turkish President Recep Tayyip Erdogan has accused his French counterpart Emmanuel Macron of “mistreating” millions of Muslims after officials announced a crackdown on radical mosques and Islamic extremism across France.
.

“What is Macron’s problem with Islam and Muslims? He needs mental health treatment,” Erdogan said at a meeting of the ruling Justice and Development Party on Saturday, Turkish media reported.

What else can be said to a head of state that does not understand the freedom of belief and treats the millions of members of a religious minority in his country this way? First of all, he needs [a] mental check.

Erdogan has been highly critical of the rhetoric Macron has employed to combat Islamic extremism in France. In early October, the French leader stated that Islam was “in crisis” worldwide due to the rise of fundamentalism. In the same speech, Macron rolled out a set of steps aimed at strengthening the country’s secular values and curbing what he dubbed “Islamist separatism.” The Turkish president denounced Macron’s stance as a “clear provocation,” accusing him of targeting Islam in order to “cover up” his failures in domestic policy.

The French government renewed its pledge to crack down on radical Islam after the nation was left shocked by the murder of Samuel Paty. A middle school teacher, Paty was beheaded in a Parisian suburb on October 16 by a young Chechen refugee after he showed a cartoon of Prophet Mohammed to his students as part of a class on freedom of expression. In response to the killing, officials promised to strengthen the oversight of the funding of mosques and to shut down mosques and Muslim NGOs accused of spreading hate online, among other measures.

With the Charlie Hebdo images now being projected onto buildings in France, it seems free speech is being encouraged by the authorities. If so, this must apply to everyone – and selective prosecutions must be stopped.

The murder and decapitation of a school teacher in the Paris suburb of Conflans-Sainte-Honorine earlier this month for showing his class caricatures of the Prophet Mohammed – the same images cited by jihadists when, in January 2015, they killed journalists working at Charlie Hebdo, the satirical magazine that initially published them – has sparked a rhetorical U-turn by the French authorities.

In the wake of the attack on Charlie Hebdo’s headquarters, the general message from public officials was that exercising one’s freedom of expression, however distasteful, doesn’t warrant death. But at the same time, there was acknowledgement that the free speech exercised by the magazine in publishing the cartoons served to provoke. Great caution was taken by officials through self-censorship to avoid further fanning the flames. The implication was that free speech was a good thing – but only in certain circumstances – and that maybe some speech needed to be curtailed to avoid inciting division, unrest, and murder.

Fast-forward to the present day and this latest act of terrorism attributed to the same Charlie Hebdo images. Suddenly, French officials are positioning themselves as defenders of free speech at any cost. French President Emmanuel Macron tweeted on the night of the attack, “Ils ne passeront pas” (‘they shall not pass’), evoking the famous phrase “¡No pasarán!” used by the Spanish Republic against General Franco at the outset of the Spanish Civil War.

Free Speech must be enshrined in French law

It has since been adopted more generally as an anti-fascist slogan. So, suddenly, the president of France appears to be declaring war against jihadist fascism, which wants to control what citizens say and do in democratic countries.

And French establishment figures of all stripes are echoing Macron’s message. Manuel Valls, who was prime minister during the first Charlie Hebdo attack, has called on all French media to republish the caricatures.

The beheading of a teacher shows Islamic extremists are still intent on destroying us. Here are 5 steps we must take to stop them

At a memorial service for the fallen teacher, Samuel Paty, 47, Macron reiterated his commitment to protecting free speech: “We will continue, Teacher. We will continue this fight for freedom, this fight to defend the republic of which you have become the face.”

There are quite a few people in France who will likely consider this volte-face as welcome news. Because, until now, free expression in France has frequently been subjected to criminal prosecution – even in the context of bringing to light the most shocking realities of radical Islamist terrorism. For instance, Marine Le Pen, the leader of the Rassemblement National, was criminally charged, along with a fellow party member, for exercising free expression online by merely republishing graphic images of violent acts perpetrated by Islamic State terrorists. If the French state is serious about defending free speech, then it goes without saying that those charges should be dropped for starters.

The many criminal pursuits by the French state against journalists routinely charged and convicted by the courts for expressing an opinion classified as hatred under the country’s hate-speech laws should also now be abandoned and all convictions overturned.

In fact, just eliminate hate-speech laws altogether, as they’re contrary to the most basic principles of free expression. If Macron and his majority government aren’t paying lip service in the wake of this attack, then they should enshrine free speech in French law.

Real structural reforms are required. That is, if Macron is actually serious. Because we’re talking about the same president who, just last year, actively worked to extend hate-speech laws to the internet. So despite all the encouraging rhetoric in the wake of this emotional incident, I won’t be holding my breath for any real or lasting change.

By Rachel Marsden, columnist, political strategist and host of an independently produced French-language program that airs on Sputnik France. Her website can be found at rachelmarsden.com