Last time I checked it was about freedom of speech and Koran rage.

Macron: We are fighting against ‘hatred shared in the name of a distorted Islam…never against Islam’

“I will not allow anybody to claim that France, or its government, is fostering racism against Muslims.”

Great. But can you please enlighten us as to what race Muslims are? I had the silly idea that Muslims, and jihadis, were of all races.

It’s also a silly idea to try and separate Muslims from jihadis. Every Mohammedan is religiously obliged to support jihad.

Here is more about that supposedly distorted Islam, courtesy of the authoritative sources in Sunni Islam, the schools of Sunni jurisprudence (madhahib):

Shafi’i school: A Shafi’i manual of Islamic law that was certified in 1991 by the clerics at Al-Azhar University, one of the leading authorities in the Islamic world, as a reliable guide to Sunni orthodoxy, stipulates about jihad that “the caliph makes war upon Jews, Christians, and Zoroastrians…until they become Muslim or pay the non-Muslim poll tax.” It adds a comment by Sheikh Nuh Ali Salman, a Jordanian expert on Islamic jurisprudence: the caliph wages this war only “provided that he has first invited [Jews, Christians, and Zoroastrians] to enter Islam in faith and practice, and if they will not, then invited them to enter the social order of Islam by paying the non-Muslim poll tax (jizya)…while remaining in their ancestral religions.” (‘Umdat al-Salik, o9.8).

Of course, there is no caliph today, and hence the oft-repeated claim that Osama et al are waging jihad illegitimately, as no state authority has authorized their jihad. But they explain their actions in terms of defensive jihad, which needs no state authority to call it, and becomes “obligatory for everyone” (‘Umdat al-Salik, o9.3) if a Muslim land is attacked. The end of the defensive jihad, however, is not peaceful coexistence with non-Muslims as equals: ‘Umdat al-Salik specifies that the warfare against non-Muslims must continue until “the final descent of Jesus.” After that, “nothing but Islam will be accepted from them, for taking the poll tax is only effective until Jesus’ descent” (o9.8).

Hanafi school: A Hanafi manual of Islamic law repeats the same injunctions. It insists that people must be called to embrace Islam before being fought, “because the Prophet so instructed his commanders, directing them to call the infidels to the faith.” It emphasizes that jihad must not be waged for economic gain, but solely for religious reasons: from the call to Islam “the people will hence perceive that they are attacked for the sake of religion, and not for the sake of taking their property, or making slaves of their children, and on this consideration it is possible that they may be induced to agree to the call, in order to save themselves from the troubles of war.”

However, “if the infidels, upon receiving the call, neither consent to it nor agree to pay capitation tax [jizya], it is then incumbent on the Muslims to call upon God for assistance, and to make war upon them, because God is the assistant of those who serve Him, and the destroyer of His enemies, the infidels, and it is necessary to implore His aid upon every occasion; the Prophet, moreover, commands us so to do.” (Al-Hidayah, II.140)

Maliki school: Ibn Khaldun (1332-1406), a pioneering historian and philosopher, was also a Maliki legal theorist. In his renowned Muqaddimah, the first work of historical theory, he notes that “in the Muslim community, the holy war is a religious duty, because of the universalism of the Muslim mission and (the obligation to) convert everybody to Islam either by persuasion or by force.” In Islam, the person in charge of religious affairs is concerned with “power politics,” because Islam is “under obligation to gain power over other nations.”

Hanbali school: The great medieval theorist of what is commonly known today as radical or fundamentalist Islam, Ibn Taymiyya (Taqi al-Din Ahmad Ibn Taymiyya, 1263-1328), was a Hanbali jurist. He directed that “since lawful warfare is essentially jihad and since its aim is that the religion is God’s entirely and God’s word is uppermost, therefore according to all Muslims, those who stand in the way of this aim must be fought.”

This is also taught by modern-day scholars of Islam. Majid Khadduri was an Iraqi scholar of Islamic law of international renown. In his book War and Peace in the Law of Islam, which was published in 1955 and remains one of the most lucid and illuminating works on the subject, Khadduri says this about jihad: “The state which is regarded as the instrument for universalizing a certain religion must perforce be an ever expanding state. The Islamic state, whose principal function was to put God’s law into practice, sought to establish Islam as the dominant reigning ideology over the entire world….The jihad was therefore employed as an instrument for both the universalization of religion and the establishment of an imperial world state.” (P. 51)

Imran Ahsan Khan Nyazee, Assistant Professor on the Faculty of Shari’ah and Law of the International Islamic University in Islamabad. In his 1994 book The Methodology of Ijtihad, he quotes the twelfth century Maliki jurist Ibn Rushd: “Muslim jurists agreed that the purpose of fighting with the People of the Book…is one of two things: it is either their conversion to Islam or the payment of jizyah.” Nyazee concludes: “This leaves no doubt that the primary goal of the Muslim community, in the eyes of its jurists, is to spread the word of Allah through jihad, and the option of poll-tax [jizya] is to be exercised only after subjugation” of non-Muslims.

All these and many, many others got Islam wrong. Emmanuel Macron has it right. Trust Emmanuel Macron. He will thread the needle between the “distorted Islam” and the true, peaceful Islam, and we will all march arm-in-arm into the glorious multicultural future. Won’t we? 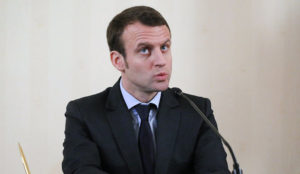 For its readers, and I am one, being informed by the Financial Times means being certain of accessing robust facts, rich analysis and reliable information, without needing to verify its veracity. Therefore, who could imagine that the statements made publicly by the head of a G7 member state could be distorted by this news organisation?

And yet, that is what happened in a column published online yesterday. The piece misquoted me, substituting “Islamic separatism” — a term that I have never used — for “Islamist separatism”, which is a reality in my country. It accused me of stigmatising French Muslims for electoral purposes and of fostering a climate of fear and suspicion towards them….

For over five years now, and since the attacks on Charlie Hebdo, France has faced a wave of attacks perpetrated by terrorists in the name of an Islam that they have distorted. Some 263 people — police officers, soldiers, teachers, journalists, cartoonists, ordinary citizens — have been assassinated in our homeland. Most recently, an attack that fortunately did not result in any casualties once again targeted the premises of Charlie Hebdo; a history and geography teacher, Samuel Paty, was decapitated; in Nice, two women and a man were assassinated in a church….

France has been attacked by Islamist terrorists because it embodies freedom of expression, the right to believe or not to believe and a certain way of life. The French people have risen up to say that they will not surrender any of France’s values, its identity, or its imagination. Nor any of these human rights that it proclaimed for the world, back in 1789….

But since 2015 it has become clear, and I said this even before I became president, that there are breeding grounds for terrorists in France. In certain districts and on the internet, groups linked to radical Islam are teaching hatred of the republic to our children, calling on them to disregard its laws. That is what I called “separatism” in one of my speeches.

If you do not believe me, read the social media postings of hatred shared in the name of a distorted Islam that resulted in Paty’s death. Visit the districts where small girls aged three or four are wearing a full veil, separated from boys, and, from a very young age, separated from the rest of society, raised in hatred of France’s values.

Speak to government prefects who are confronted on the ground with hundreds of radicalised individuals, who we fear may, at any moment, take a knife and kill people. This is what France is fighting against — designs of hatred and death that threaten its children — never against Islam. We oppose deception, fanaticism, violent extremism. Not a religion….

I will not allow anybody to claim that France, or its government, is fostering racism against Muslims. France — we are attacked for this — is as secular for Muslims as for Christians, Jews, Buddhists and all believers. The neutrality of the state, which never intervenes in religious affairs, is a guarantee of freedom of worship. Our law enforcement forces protect mosques, churches and synagogues alike.

France is a country that knows what it owes to the Islamic civilisation: its mathematics, its science, its architecture all borrow from it, and I announced the creation of an institute in Paris to showcase this great wealth. France is a country where Muslim leaders speak out when the worst happens, and call on followers to fight radical Islamism and defend freedom of expression….

Editors note: the online opinion piece that this letter refers to was published briefly on November 2 and then removed for review after readers pointed out factual inaccuracies.

3 thoughts on “Macron babbles stupidly about “racism against Muslims””