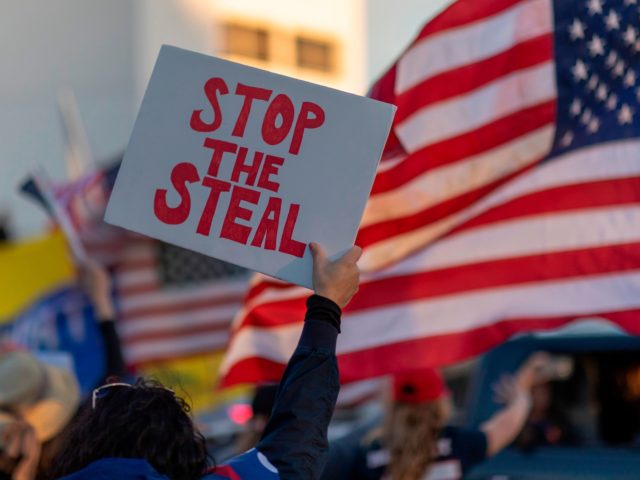 The founder of a Long Island caravan rally in support of President Donald Trump says the rallies are not ending, but, instead, growing stronger, as the president challenges election results in a race that has been called by some in the media.

.
The Democrats are right, there are two Americas. The America that works and the America that doesn’t. The America that contributes and the America that doesn’t. It’s not the haves and the have nots, it’s the dos and the don’ts. Some people do their duty as Americans, obey the law, support themselves, contribute to society and others don’t. That’s the divide in America .
.
In other words, it’s the parasite against the working man. It’s the savage against civilisation.
.
It’s not about income inequality, it’s about civic irresponsibility. It’s about a political party that preaches hatred, greed and victimization in order to win elective office. It’s about a political party that loves power more than it loves its country.
.
That’s not invective, that’s truth, and it’s about time someone said it.
The politics of envy was on proud display a couple weeks ago when President Obama pledged the rest of his term to fighting “income inequality.” He noted that some people make more than other people, that some people have higher incomes than others, and he says that’s not just. That is the rationale of thievery.
The other guy has it, you want it, Obama will take it for you. Vote Democrat. That is the philosophy that produced Detroit.
It is the electoral philosophy that is destroying America. It conceals a fundamental deviation from American values and common sense because it ends up not benefiting the people who support it, but a betrayal.
The Democrats have not empowered their followers, they have enslaved them in a culture of dependence and entitlement, of victim-hood and anger instead of ability and hope. The president’s premise – that you reduce income inequality by debasing the successful–seeks to deny the successful the consequences of their choices and spare the unsuccessful the consequences of their choices. Because, by and large, income variations in society are a result of different choices leading to different consequences.
Those who choose wisely and responsibly have a far greater likelihood of success, while those who choose foolishly and irresponsibly have a far greater likelihood of failure.
.
Success and failure usually manifest themselves in personal and family income. You choose to drop out of high school or to skip college – and you are apt to have a different outcome than someone who gets a diploma and pushes on with purposeful education.
You have your children out of wedlock and life is apt to take one course; you have them within a marriage and life is apt to take another course. Most often in life our destination is determined by the course we take.
.
My doctor, for example, makes far more than I do. There is significant income inequality between us. Our lives have had an inequality of outcome, but, our lives also have had an in equality of effort. While my doctor went to college and then devoted his young adulthood to medical school and residency, I got a job in a restaurant. He made a choice, I made a choice, and our choices led us to different outcomes. His outcome pays a lot better than mine. Does that mean he cheated and Barack Obama needs to take away his wealth? No, it means we are both free men in a free society where free choices lead to different outcomes.
.
It is not inequality Barack Obama intends to take away, it is freedom. The freedom to succeed, and the freedom to fail. There is no true option for success if there is no true option for failure. The pursuit of happiness means a whole lot less when you face the punitive hand of government if your pursuit brings you more happiness than the other guy. Even if the other guy sat on his arse and did nothing. Even if the other guy made a lifetime’s worth of asinine and short sighted decisions.
.
Barack Obama and the Democrats preach equality of outcome as a right, while completely ignoring inequality of effort.
The simple Law of the Harvest – as ye sow, so shall ye reap – is sometimes applied as, “The harder you work, the more you get.”
Obama would turn that upside down. Those who achieve are to be punished as enemies of society and those who fail are to be rewarded as wards of society. Entitlement will replace effort as the key to upward mobility in American society if Barack Obama gets his way. He seeks a lowest common denominator society in which the government besieges the successful and productive to foster equality through mediocrity. He and his party speak of two Americas, and their grip on power is based on using the votes of one to sap the productivity of the other. America is not divided by the differences in our outcomes, it is divided by the differences in our efforts.
.
It is a false philosophy to say one man’s success comes about unavoidably as the result of another man’s victimization.
What Obama offered was not a solution, but a separatism. He fomented division and strife, pitted one set of Americans against another for his own political benefit. That’s what socialists offer. Marxist class warfare wrapped up with a bow. Two Americas, coming closer each day to proving the truth to Lincoln’s maxim that a house divided against itself cannot stand.
“Life is ten percent what happens to you and ninety percent how you respond to it.”
Lou Holtz
Leo “Lou” Holtz (born January 6, 1937) is a retired American football coach, and active sportscaster, author, and motivational speaker.