Erdogan's Caliph Complex is out of control https://t.co/kegYpqL0Qo

The Real Enemy of Islam

Last week, France condemned Turkish President Recep Tayyip Erdogan for comments he made about French President Emmanuel Macron’s mental health and treatment of Muslims. Erdogan had suggested that the French president needed “some kind of mental treatment” because of Macron’s attitude toward Muslims in France. Pictured: Macron (right) and Erdogan at a press conference on January 5, 2018 in Paris, France. (Photo by Ludovic Marin/AFP via Getty Images)

Turkish President Recep Tayyip Erdogan is not authorized to speak on behalf of the Muslims, especially regarding the current controversy surrounding France’s attitude toward Islam and Muslim terrorist attacks. That is what many Muslims are saying these days in the aftermath of Erdogan’s attempt to present himself as the grand defender of Islam in a conflict that recently erupted between Muslims and France.

According to several Muslim political analysts and writers, Erdogan is trying to take advantage of the anti-France campaign in the Muslim world for his own political gain. The message the Muslims are sending to France and the rest of the world is that Erdogan is a hypocrite and opportunist, who is acting from personal interest and not out of concern for Muslims or Islam. 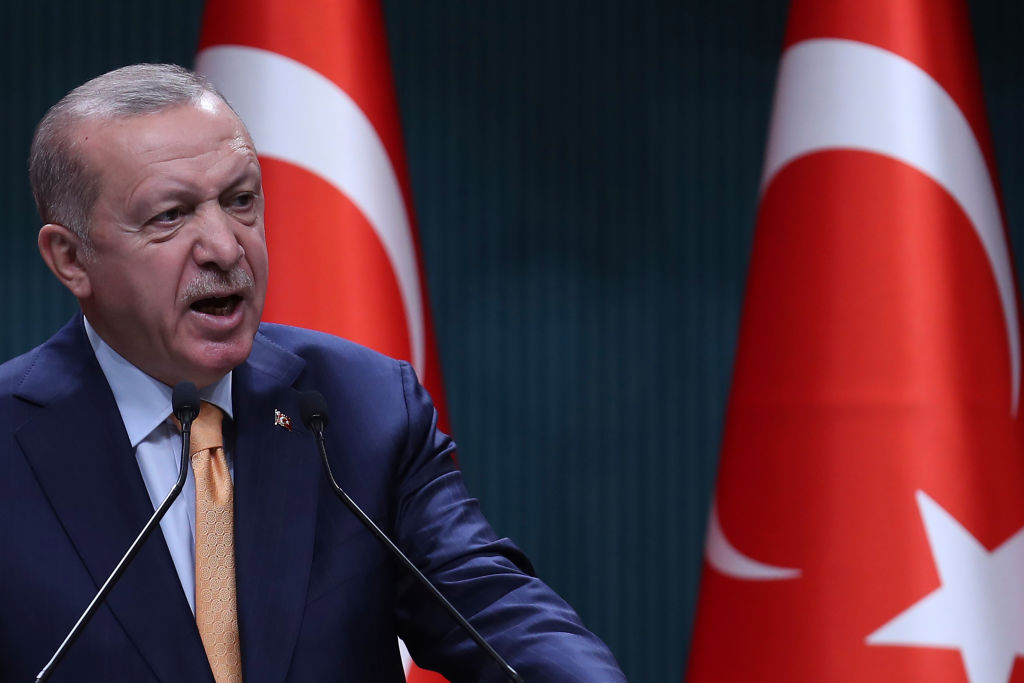 The Turkish government has, in recent years, escalated its rhetoric of neo-Ottomanism and conquest. On August 26, President Recep Tayyip Erdoğan gave a speech in which he said: “Turkey will take what is its right in the Mediterranean Sea, in the Aegean Sea, and in the Black Sea.” Pictured: Erdoğan in Ankara on October 5, 2020. (Photo by Adem Altan/AFP via Getty Images)

The Turkish government has, in recent years, escalated its rhetoric of neo-Ottomanism and conquest.

On August 26, for instance, President Recep Tayyip Erdoğan gave a speech at an event celebrating the 949th anniversary of the Battle of Manzikert. This battle resulted in Turks from Central Asia invading and capturing the then majority-Armenian city of Manzikert, within the borders of the Byzantine Empire.

Parts of his speech were translated by MEMRI:

“In our civilization, conquest is not occupation or looting. It is establishing the dominance of the justice that Allah commanded in the [conquered] region.

“First of all, our nation removed the oppression from the areas that it conquered. It established justice. This is why our civilization is one of conquest.