Obama says that Trump is delegitimizing democracy. Yet it was the party of Obama that eliminated the need for postmarks on ballots. 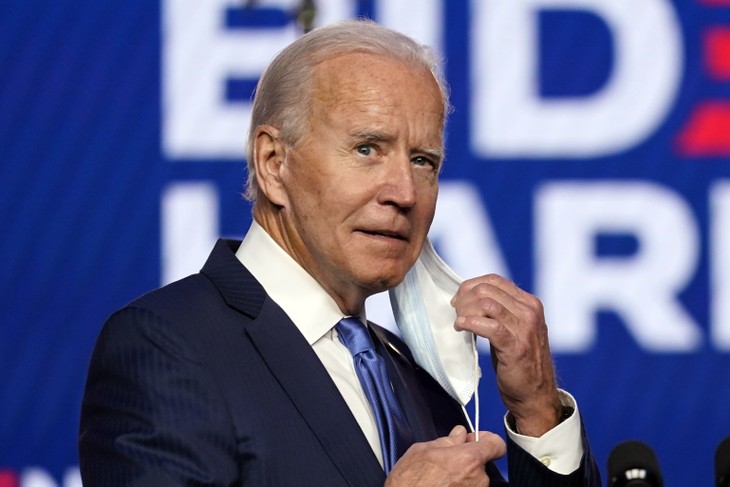 AP Photo/Carolyn Kaster
.Richard Stengel, according to the New York Post, “is the Biden transition ‘Team Lead’ for the US Agency for Global Media, the U.S. government media empire that includes Voice of America, the Middle East Broadcasting Networks and Radio Free Europe/Radio Liberty.” He is also a menace to our constitutional protections and to free society in general. If he is any indication of what is coming, we’re in for a rough four years, or longer.The full article by Robert Spencer is posted below the fold.

When Democrats Tell You They’re Going to Establish Truth and Reconciliation Commissions, Believe Them

The original plan was the gradual development of a tyrannical, global super-state. Trump screwed up their plan. This is their last-ditch effort to ram it down our throats.

Look at this cretin. These loony Lefties are actually defending a guy being punched from behind & then having his head repeatedly kicked when unconscious on the ground. And btw I posted the 2.20 minute video last night & several times since.

Feel the tolerance. This is the violence that the Left incites, rationalises or just ignores. https://t.co/YcVIu5p6RQ

Check this out, it gets really fugally:

Stengel wrote last year in a Washington Post op-ed that the freedom of speech must be restricted, for “all speech is not equal. And where truth cannot drive out lies, we must add new guardrails. I’m all for protecting ‘thought that we hate,’ but not speech that incites hate.”

What kind of speech “incites hate”? As far as Stengel is concerned, the answer is any speech that Muslims find offensive. He wrote: “Even the most sophisticated Arab diplomats that I dealt with did not understand why the First Amendment allows someone to burn a Koran. Why, they asked me, would you ever want to protect that?”

Well, maybe because a law forbidding criticism (including mockery) of any group establishes that group as a protected class that cannot be questioned, and that in turn would allow this group to do whatever it wanted without fear of any opposition even being allowed to articulate its case. The freedom of speech is, in sum, our foremost protection against tyranny. Without it, a tyrant can work his will without any fear of his opponents uttering even one cross word.

But instead of explaining and defending the freedom of speech, Stengel agreed with his “sophisticated Arab diplomats,” answering their query about Qur’an-burning with this: “It’s a fair question. Yes, the First Amendment protects the ‘thought that we hate,’ but it should not protect hateful speech that can cause violence by one group against another. In an age when everyone has a megaphone, that seems like a design flaw.”

Many other nations are fixing that “design flaw,” according to Stengel, and so the U.S. should also: “Since World War II, many nations have passed laws to curb the incitement of racial and religious hatred. These laws started out as protections against the kinds of anti-Semitic bigotry that gave rise to the Holocaust. We call them hate speech laws, but there’s no agreed-upon definition of what hate speech actually is. In general, hate speech is speech that attacks and insults people on the basis of race, religion, ethnic origin and sexual orientation.”

The destruction of the freedom of speech is an idea whose time has come, says Stengel. “I think it’s time to consider these statutes. The modern standard of dangerous speech comes from Brandenburg v. Ohio (1969) and holds that speech that directly incites ‘imminent lawless action’ or is likely to do so can be restricted. Domestic terrorists such as Dylann Roof and Omar Mateen and the El Paso shooter were consumers of hate speech. Speech doesn’t pull the trigger, but does anyone seriously doubt that such hateful speech creates a climate where such acts are more likely?”

Stengel’s statement that “the First Amendment protects the ‘thought that we hate,’ but it should not protect hateful speech that can cause violence by one group against another” means that if Muslims riot over burned Qur’ans, we must outlaw burning Qur’ans. That would only signal to Muslims that they can get us to bend to their will by threatening violence, and ensure that we will see many more such threats.

In Richard Stengel’s ideal world, non-Muslims are cowed into silence by Muslims who threaten to kill them if they get out of line, and by non-Muslim officials who react to the threats by giving the Muslims what they want.

Note also that Leftist and Islamic groups in the U.S. have for years insisted, with no pushback from any mainstream politician or media figure, that essentially any and all criticism of Islam, including analysis of how Islamic jihadis use the texts and teachings of Islam to justify violence and make recruits among peaceful Muslims, is “hate speech” and “speech that incites hate.” Thus Richard Stengel will silence that as well, and the global jihad will be able to advance unopposed and unimpeded.

In a year or two I might tell you “I warned you this was coming,” but by then I probably won’t be able to.

Robert Spencer is the director of Jihad Watch and a Shillman Fellow at the David Horowitz Freedom Center. He is author of 21 books, including the New York Times bestsellers The Politically Incorrect Guide to Islam (and the Crusades) and The Truth About Muhammad. His latest book is Rating America’s Presidents: An America-First Look at Who Is Best, Who Is Overrated, and Who Was An Absolute Disaster. Follow him on Twitter here. Like him on Facebook here.