UK: Muslim stabs two women in Marks & Spencer, one in the neck, cops search for motive

It’s so hard to find a motive when an allahuakbaring Koranimal is involved. I wonder why that is? Full story below the fold.

The perpetrator is identified only as “a local man, 57.” However, photos of the arrest show a man with a long beard, wearing Muslim garb. That raises the possibility that the killing may have been motivated by something like this: the Islamic State issued this call in September 2014: 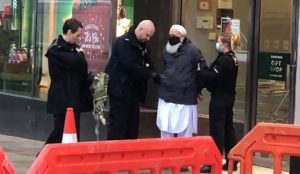 “Woman is STABBED ‘in the neck’ and another is seriously injured by knifeman while shopping in Marks & Spencer on ‘Wild Wednesday’ as stores reopen for first time after lockdown,” by Faith Ridler, Mailonline, December 2, 2020 (thanks to the Geller Report):

Two women were today stabbed as they shopped in Marks & Spencer just hours after lockdown ended and all non-essential stores reopened in England.

A local man, 57, was arrested on suspicion of attempted murder following the attack in Burnley at around 9.30am, Lancashire Police said.

The two victims were rushed to hospital with serious injuries which are ‘not thought to be life threatening at this time.’

The stabbing came as shoppers flocked back to the High Street after the national coronavirus lockdown was lifted and all shops reopened on ‘Wild Wednesday.’

Footage from the scene captured a man in a face mask being detained by officers outside the Marks & Spencer store this morning.

Witnesses claimed one of the women was stabbed in the neck during the attack, but this has not yet been confirmed.

Lancashire Police said a knife was recovered from the scene following what is believed to be an ‘isolated incident.’…

Officers were unable to speculate on a motive for the attack but confirmed nobody else is thought to be involved.

A force spokesman said: ‘We were called at about 9.30am today to a report of a stabbing inside the Marks and Spencer store in Burnley….

The force added: ‘We would kindly ask that you don’t speculate about the motivation behind the incident….

One thought on “Germany:Vehicle Jihad in Trier, Stabbing jihad in Londonistan”