But the tests are crap.

Italian scientists tested a Kiwi fruit for Covid and it came back POSITIVE! 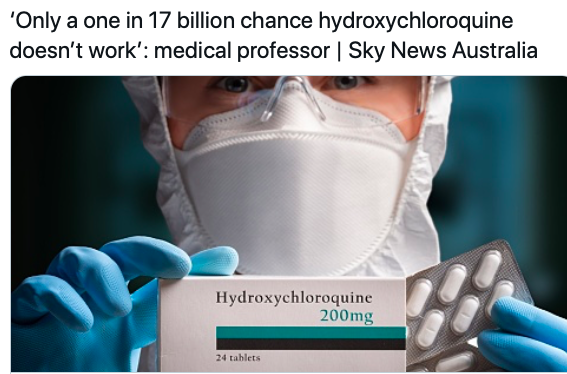 Hydroxychloroquine really works says Professor of Medicine Dr Peter McCullough, describing the treatment as “the most widely used therapeutic” to treat COVID-19 in the world. “The chances that it doesn’t work are calculated to be one in 17 billion,” he told Sky News. “There’s no controversy over whether or not hydroxychloroquine works. The controversy is on the public health approach to COVID-19.” Mr McCullough said “the virus invades inside cells, so we have to use drugs that go inside the cell and work to reduce viral replication”. “The drugs that work within the cell and actually reduce viral replication are hydroxychloroquine, Ivermectin, doxycycline and azithromycin”. “Sadly, in the United States and I know in Australia this happens all the time, patients get no treatment whatsoever. They literally are told to stay at home until they are sick enough to go to the hospital” “I think that honestly it’s atrocious. “History will look back on that and think it was the worst way to handle a potentially fatal illness.”

Dr. Fraudci Admits to Misleading the Public on Health Information

Dr. Fauci acknowledged that he had slowly but deliberately been moving the goal posts. He is doing so, he said, partly based on new science, and partly on his gut feeling that the country is finally ready to hear what he really thinks.