That’s all of us. Every constitutional conservative, every #Trump supporter & every red-blooded patriot. 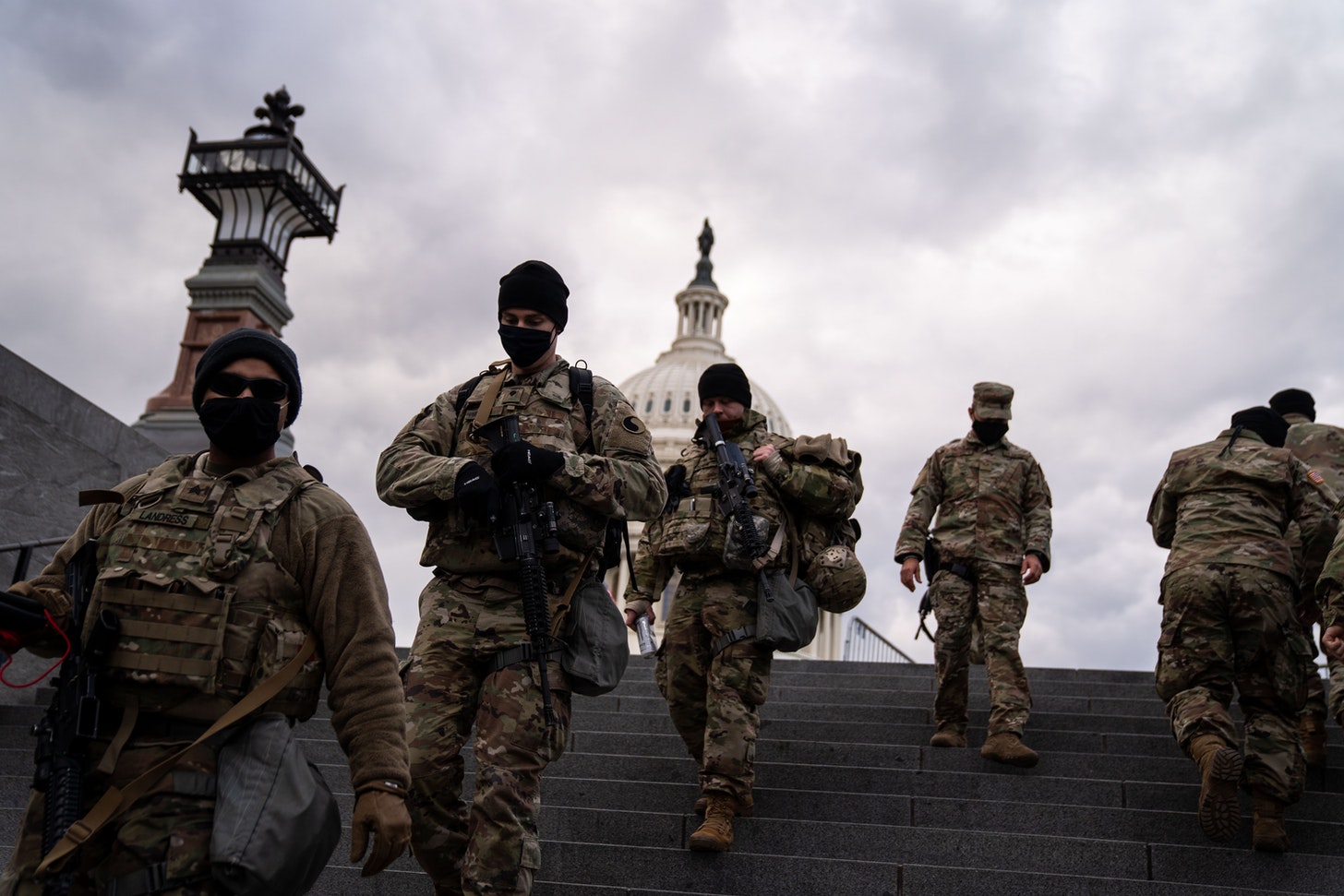 Too bad we didn’t have 25,000 troops last summer to help protect the innocent people who had their businesses burned to the ground.

America, a Country of Victorious Socialism

With lightning speed, America has fallen into the hands of radicals  bent on changing the nature of the Republic. More

The revolution I’ve been warning about for the last ten years has happened. More by Alex Markovsky

*Imagine* if Trump had declared a loyalty screening of military members to remove anyone who held *beliefs* he felt were unAmerican.

Demanding the military pledges loyalty to a political party is what dictators do.

This is the United States of America.

There is no excuse to submit our brave military men and women to this Unconstitutional behavior. pic.twitter.com/34AqvAyfik

That doesn’t mean we will ever see an investigation.

@LouDobbs just said he would have Trump on his show to allow him to release the ObamaGate documents to the American people. God bless and protect you, Lou!

Colorado Congresswoman Lauren Boebert tells me she will not be attending tomorrow’s Presidential inauguration. However, she will be attending a send-off for President Trump.

“The most recent poll included in the RealClear average, from Rasmussen & conducted ** Jan. 17-19, shows Trump with a 51 percent ** approval rating.” Trump Set To Leave Office With A Higher Approval Rating Than Bush

If the Biden Regime moves forward with cancelling the Keystone pipeline, it will not only cost thousands of jobs, but also send a message that he intends to undermine American energy independence and drive up costs for working-class Americans. Why Doesn’t the Republican Establishment Understand the Meaning of Betrayal

There Was No Revolution

It was a protest hijacked by false flag operatives. The oldest trick in the book

A couple of crackpots who pranked at the Capitol are now being called a “revolution.” As if that crazy, painted-face shaman with the buffalo-horn hat was leading — what are they calling it? Ah yes, an insurrection.

There was a call by millions of Americans for election integrity. It was met with “shoot to kill” behavior and then a great purge. It wasn’t a revolution; it was more like an ambush. No one is asking who gave the shoot-to-kill order or who gave the order to invite protesters into the Capitol building.

The New Domestic War on Terror is Coming

Excellent piece by @ggreenwald on the New Domestic War on Terror, which is really the war on Trump supporters

No speculation is needed. Those who wield power are demanding it. The only question is how much opposition they will encounter.

We do know that the January 6, 2021 Capitol protesters were invited in. See the video here. And here.

What we do know is that there were scores of Trump rallies attended by hundreds of thousands of people, with not one incident.

What we do know is our people are peaceful, respectful and law-abiding. What we do know is we are a subclass — “Untouchables” — who have been brutally punished at every turn, most especially this past year, by Democrat despots.

We do know is that we witnessed months of “insurrection” — burning cities, government buildings, streets, and even sometimes homes, and were told it was peaceful and necessary. That was insurrection.

We watched Democrats take over the Hart Senate Building and State Capitol buildings and were told it was beautiful. On September 24, 2018, during the Kavanaugh hearings, NARAL tweeted:

“RIGHT NOW: Large crowd of activists & allies in black are occupying the Hart Senate building to make sure our lawmakers know we will NOT be silenced. We need our senators to step up to the plate — Brett Kavanaugh’s nomination must be withdrawn. #StopKavanaugh #CancelKavanaugh”

And according to political consultant Mike Yoder, “In 1983, Susan Rosenberg planted a bomb outside the US Senate chamber to assassinate Republican senators. House Judiciary Committee Chairman @RepJerryNadler got Pres. Clinton to pardon Susan Rosenberg. She’s now a board member of Black Lives Matter Network, Inc.”

We do know that all talk of the greatest election theft in history has utterly and absolutely ceased.

There was no revolution. There was a call by the people for election integrity.

It was, it must again be emphasized, met with “shoot to kill” behavior and then a great purge. We’re all being terminated on social media. For years we warned for years as social media did this to conservatives with the courage of their convictions. The soft Right either ignored us or worse, quietly nodded in assent.

The Garland, Texas free speech event we held in Texas in May 2015 was purely in defense of free speech. But we were painted as “anti-Muslim,” “agitators,” “provocateurs,” etc. Just as the young mother shot down in the Capitol in cold blood, we were told we “had it coming.”

Overnight, the great purge began, and the CCP-Democrats haven’t even taken the reins of power yet.

The Democrat totalitarians mean to impose one-party rule. They are criminalizing political dissent as “domestic terrorism” and mean to criminalize it in ways one can only imagine (leaf through non-PC history books).

The biggest conservative voices have been exterminated on Twitter.

President Trump, his son, General Mike Flynn, Sidney Powell, and a great many others have been banned from Twitter. Rush Limbaugh deleted his account in disgust. Hundreds of thousands of followers are being shaved from conservative accounts. Facebook is threatening to shut down my pages.

Even Senator Josh Hawley was cancelled. Oblivious to the irony, Simon and Schuster killed the Missouri Republican’s upcoming book, The Tyranny of Big Tech.

For years we were told, “if you don’t like it, build your own social media platform!” And we did. Parler. But the totalitarians didn’t think we actually would, so now Google and Apple have removed Parler for their platforms. But even that wasn’t enough; now Amazon is disabling Parler’s servers.

The Chief Executive Officer of Mozilla, Mitchell Baker, said in a statement that the internet needs “more than deplatforming” and that change “requires more than just the temporary silencing or permanent removal of bad actors from social media platforms.”

Again, remember: they don’t have their grubby fingers on the levers of power yet.

Patriots who attended the protest are being hunted down like dogs, fired from their jobs, shamed in the public square.

Were there a couple of bad actors in the million-person march for America? Of course. But there were also agitators from Antifa. You’ll read nothing of that, either.

So why the desperate frenzy? They fear Trump. They fear us. But mostly because it’s an opportunity for totalitarians. It provides the context — the optics — to put down the people, as CNN and the rest of the Goebbelsesque media want to do. It is the Democrat version of the Reichstag fire.

They will force us underground. We will communicate like Germany’s “White Rose” Society (aka “Leaflets of the Resistance”).

If you think I am exaggerating, look around. I was right about it all.

The Great Purge is hardly new. It is used in all totalitarian seizures of power. Think Hitler, Stalin, Mao et al…. destroy the opposition. Crush dissent.

For now, subscribe to news curators and information disseminators you trust. Stay away from the nuts. Subscribe to the Geller Report here.

For the record, I support President Trump.

The pile-on, especially from the right, is most foul. Trump saved the right, saved the Republican party, and he delivered in spades. Trump is the greatest President in modern history. But he is more than that. He is akin to a biblical figure — Job.

Pamela Geller is the President of the American Freedom Defense Initiative (AFDI), publisher of The Geller Report and author of the bestselling book, FATWA: Hunted in America, as well as The Post-American Presidency: The Obama Administration’s War on America and Stop the Islamization of America: A Practical Guide to the Resistance. Follow her on Twitter and Facebook.

One thought on “And just like that, America turned into a socialist sh*thole…”