They also dressed as police officers.

They posted signs on line.

MAGA was framed Inside job also.

Antifa were let inside

Remember kids, you're crazy for thinking that Antifa started any type of trouble at the Capitol Building.

Even though they're right here changing into MAGA gear. pic.twitter.com/UjaezHX3oX

Sen. Chuck Schumer: “Donald Trump should not be eligible to run for office ever again.” 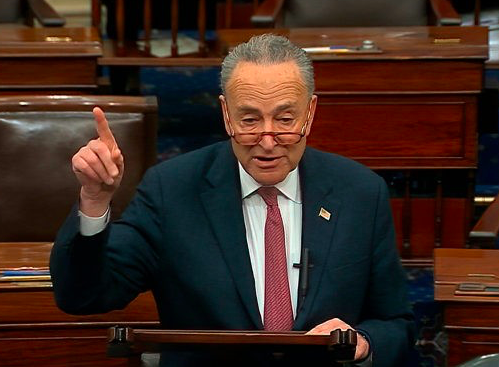 It’s painful to see this worthless piece of shiite bloviating like that. 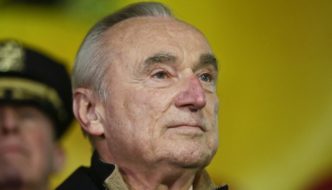 This guy exhibits the degeneracy that infested every institution in the U.S.  Embedded communists accuse their fellow citizens of being reactionaries. In reality, Americans are facing a full-blown communist insurgency.

Former New York City police commissioner Bill Bratton told Shepard Smith Friday that “for the last 20 years our biggest concern was international terrorism — ISIS, Al Qaeda,” but “now it’s here and it’s us, and it’s the citizens of the United States, some of whom are rebelling against everything we thought we believed in for the last 300 to 400 years.” (Apparently Bratton subscribes to the 1619 Project, which dates America’s founding not from 1776, but from 1619, so as to add on 150 extra years of slavery and oppression.) And Bratton wasn’t alone: his analysis of the “far-right” threat is the latest establishment media narrative.

Former FBI director James Comey joined in the fun. Asked by a British broadcaster if he thought “far-right extremism in the US” was “a greater danger to the country than Islamist terrorism,” Comey answered in the affirmative, and added: “The threat has slowly risen as Donald Trump and those around him have withdrawn the control rods. America has always had a radioactive stew of racist conspiracy-minded misogynist people oriented towards violence. We’ve always had that in this country. But we’ve managed over generations to contain it inside a containment building as you would with a nuclear waste pile and put control rods down into it which we’re cultural. And that calmed the radiation. And over the last five years Donald Trump and those around him have pulled the rods out with signals and dog whistles and sometimes explicitly”

It’s easy to push this narrative today, when even putatively “conservative” writers are piling on President Trump for supposedly inciting a riot that began in Washington as he was calling upon the crowd to remain peaceful, and that even CNN admitted was “not just a protest that spiraled out of control,” but showed careful advance planning.

Never Trumpers will Never-Trump, no matter what the evidence is, but it is important to recognize what Bratton, Comey, and Snyder, and others like them are trying to do. Remember in Animal Farm how Boxer the horse struggled to remember, as the pigs implemented their totalitarian rule, how things had once been different? It’s all-important to remember, and these vicious and mendacious propagandists such as Comey, Snyder and Bratton, and many others, are doing their level best to make sure we forget.

Remember: It wasn’t “far-right extremists” who rioted all summer in Portland, Seattle, Kenosha, Wisconsin, New York, Atlanta, Washington, DC, and numerous other cities that I have already forgotten. It was Leftists: Antifa and Black Lives Matter, who have also been found to have been among those storming the Capitol that is being used as a Reichstag Fire pretext to shut down dissent from the Leftist agenda. When Snyder talks about “violent white supremacists, neo-Nazis, sovereign citizens, militia movements,” what he really means are ordinary citizens who oppose the dominant political philosophy. Lies like what Bratton is spreading here are in service of solidifying the hegemony of that philosophy.