Can’t be objective about Islam. You can’t.

London, United Kingdom – A British university professor has come under mounting criticism over what students described as his “Islamophobic” remarks and taught content.

In a statement last week, the University of Bristol’s Islamic Society (BRISOC) said it was “alarmed by multiple complaints against Professor Steven Greer of the Law School for his reported use of discriminatory remarks and Islamophobic rhetoric”.

The World Economic Forum is the “architect of the Great Reset” and aims to reduce people into mere economic vassals for a few oligarchs, according to Sky News host @corybernardi.https://t.co/rrdg6Wf5Uo 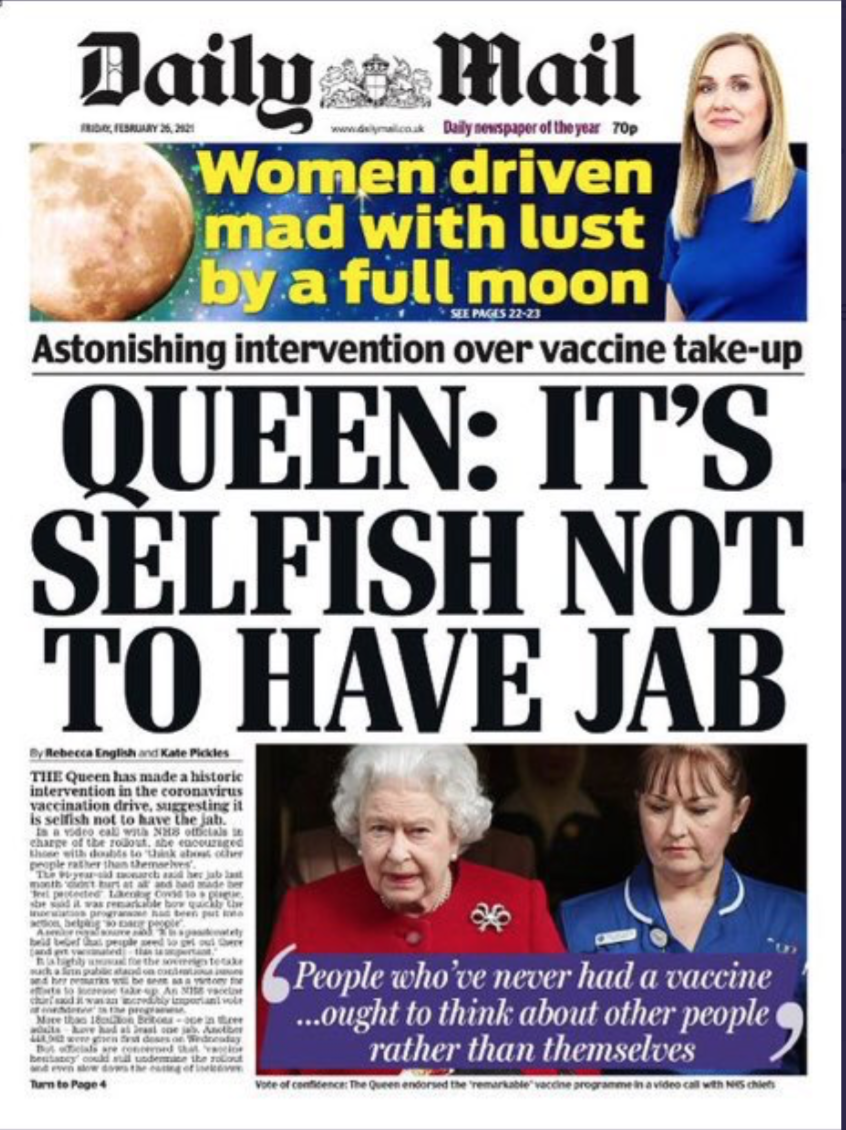 The build back better, Covid 2030, “you will own nothing & be happy” Brigade are in full panic mode. Now they are using the British Queen to promote their dodgy vaccine.

The House passed the Equality Act, despite sharp opposition from Republicans over provisions relating to hormone treatments for minors and abortion.

Remember how lefturds in the media attacked this woman? She makes a lot of sense to me.

Democrats Turn the Thumbscrews to Make Us Suffer

Tormenting us with our perpetual imaginary sins.

Everything the Democrat Party does should be seen not from an economic or a political perspective, but one of sin and suffering — the suffering it imposes on us to expiate our imagery sins.

It came to me in a flash of insight when I heard of a now-disgraced bureaucrat (“an undersecretary of climate change” in Massachusetts) who told a gathering of his colleagues that to fight melting ice caps and rising sea levels  they would have to “break the will” of ordinary Americans, by “turning the screws” — raising energy costs so high that they would have to “stop emitting.” Admirable candor from a functionary of the state with the soul of a Medieval torturer.

But it goes beyond the need to make us obey. Progressives believe Americans must be made to atone for our sins (environmental, racial, economic and national) with higher taxes and energy costs, a lower standard of living, crime, open borders, racial humiliation and national dissolution.

It’s not a power-grab as much as an attempt to force a sort of secular Calvinism on the nation.

Global Warming – Our sins here include the internal combustion engine and reliance on fossil fuel, leading to CO2 emissions said to cause depletion of the earth’s ozone layer.

Democrats demand that we expiate these sins through higher energy costs, homes that are cold in the winter and hot in the summer, gas so expensive that we’ll be forced to walk or bicycle instead of driving. If you offered AOC and the other Green New Dealers an energy source that was clean, cheap and abundant, they’d reject it out of hand because there’s no suffering involved.

Open borders – According to their holy writ, we must pay for the sins of colonialism, exploitation of the Third World, using an unfair share of the earth’s resources and treating “migrants” cruelly. Our suffering includes being forced to take in hordes of poor, uneducated, unskilled invaders, including a significant criminal element (through lack of border enforcement and amnesties), which in turn will raise the costs of education, health care, criminal justice and welfare. But this is only right. If Hondurans are mired in poverty, it’s because we’ve exploited them, the left tells us.

Racial equity – To counter the sin of white supremacy, Caucasians must be made to suffer with reparations, riots, indoctrination of their children and public confessions of guilt. In some places, public schools are imposing a curriculum that forces students and parents to admit that their whiteness is a crime against the rest of humanity.  If this seems like an updated version of Maoist self-criticism sessions, that’s because it is.

Gun confiscation – Gun owners (all 72 million in the United States), manufacturers and the NRA are said to be responsible for crime and mass shootings by clinging to the outmoded idea of a 2nd. Amendment right to keep and bear arms. The sins of bitter-clingers must be expiated by taking away their means to self-defense and shaming them – making them understand that every time a whack job shoots up a school, theater, nightclub or concert they are to blame.

The Lockdown Culture – The sin is not “listening to the scientists” (which ones?) as Clueless Joe would have it – and not taking the pandemic seriously at the outset, unlike the Red Chinese. The suffering is destroying businesses on a whim (more than 110,000 restaurants have closed permanently), eliminating shopping and entertainment and forcing us to go through the silly rituals of social distancing and face masks (which the Great Fauci assured us were unnecessary in March).  Biden – who promised us the pain of a “dark winter” — has made face masks the symbol of his administration, going so far as to tell us that donning a mask is our patriotic duty – unless you’re Nancy Pelosi getting your hair done at a pricey San Francisco salon or Gavin Newsom dining with lobbyists at a swank eatery.

Socialism – What a wonderful way to spread the misery as widely as possible. Greedy capitalists are responsible for the plight of the masses, through unequal distribution of wealth. This must be rectified through income leveling, confiscation by taxation, in the name of fairness which (because competition is eliminated) results in a lower standard of living for just about everyone.

Given a choice between prosperity and what they call fairness, the Sanders and AOCs of the world – who are now driving the Democrat Party – will choose “fairness” every time, even if Venezuela and the rationing of toilet paper lie at the end of the road.

Biden is the perfect Great Leader for the grin-and-bear-it Democrats – dour, obsessive, guilt-mongering, insistent that we sinners bend to his will. Open borders, racial guilt, gun confiscation and a Green New Deal are pillars of his administration.

At the bottom of the sin and suffering paradigm is hatred – hatred of capitalism, hatred of Middle America and (at least subconsciously) hatred of the human race.

Now, if he can only remember where he put his thumbscrews.

Hussein Obama blamed “the politics of White resistance and resentment” as the reason why he didn’t push financial reparations for Black Americans during his presidency.

Whitey resisting the Obamessiah! What’s the world coming to?