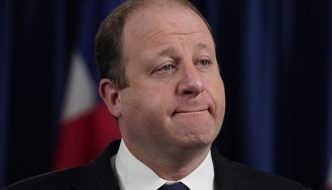 Colorado Governor: ‘There’s no reason to suspect any connection to terrorism’ in Boulder massacre

Jared Polis is neither judge nor jury. He has no authority to make these claims. He is not a police or FBI investigator, and their investigations cannot possibly be complete yet. His statements amount to abuse of his office, and reveal his own disrespect for due process, his proclivity for appeasement as opposed to leadership, and his servitude to political correctness.

Polis’ mentality is to accept uncritically what the family of mass shooter, Ahmad al Aliwi Al Issa (that’s how he spells his name himself, not “Alissa”), says. While it is possible that Al Issa is suffering from mental illness, that in itself does not prove that his attack was not motivated by Islam’s teachings on jihad. Although the investigation has a long way to go, Alissa has already been reported to have Islamic State sympathies.

Journalist Jack Posobiec, who cited an unidentified White House official, reported that Joe Biden “has been briefed the Colorado shooter had ISIS sympathies.”

In a subsequent tweet, Posobiec said, “It is beginning to look like the Boulder shooting was a jihadist terror attack.”

Posobiec reported on Twitter that government intelligence suggested Al-Alissa initially planned to execute his shooting spree at a Trump rally in Colorado Springs in February of last year, but postponed the rampage until the next one scheduled for March in Denver which was ultimately canceled over the coronavirus pandemic.

A White House official also told Posobiec that Alissa planned to travel to Syria last summer, but covid lockdowns interfered with the trip.