This is absolutely shameful. 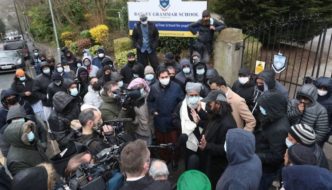 Pupils in religious studies class ‘were not upset’ by images of Prophet Mohammed, it is claimed

Students in a religious studies class shown a cartoon of Prophet Mohammed were not outraged or upset, a pupil has confirmed for the first time. A 14-year-old child in the Batley Grammar School lesson also insists the teacher did not predict how some children would tell their parents …Read More…From the Telegraph
.

It comes as no surprise – my own former union, The PCS, for which I was a branch secretary for many years, funds all manner of dubious organisations but told me that the axing of my job by a Labour government was a sacrifice that had to be made, with the silent sub-text …Read More…

“‘Muhammad cartoon row’ teacher’s own union gave £3,000 to Islamic charity that named him online and ‘endangered’ his life,” by Bhvishya Patel, MailOnline, March 31, 2021 (thanks to Henry):

The union representing the teacher who allegedly showed a caricature of the Prophet Muhammad had donated money to the charity that went on to oust him.

The National Education Union’s (NEU) Kirklees branch, in West Yorkshire, which represents the Batley Grammar School teacher, had donated £3,000 to the charity Purpose of Life who went on to publish the teacher’s name online.

The Islamic charity, which has now removed the teacher’s name from its online post, has since been accused of ‘endangering his safety’ and acting in a ‘reckless’ manner and have been reported to the Charity Commission.

After receiving a donation from the teaching union, Purpose of Life, which provides aid to the homeless in West Yorkshire as well as those in the Rohingya refugee crisis, shared a video on YouTube thanking the teaching union for their ‘kind donation’.

However the organisation later put the teacher’s name in the public domain after pupils were shown a cartoon of the Prophet Muhammad – which was reportedly taken from the French satirical newspaper Charlie Hebdo – during a religious studies lesson….

Last week Mohammed Hussain of the Purpose of Life group admitted sharing the teacher’s name on social media with a letter condemning him.

He said: ‘His name was already widely available in Internet posts and it was going around. I didn’t make public his name first.

‘It was not our intention to cause any danger to him. In fact we asked for only peaceful protest. We don’t want people breaking the law. But we do feel that if this had been something that offended the LGBT community or something that was anti-Semitic, he would’ve been sacked on the spot.

‘His resignation should be forthcoming immediately. He has insulted two billion Muslims on the planet. We cannot stand for that. We have to make our voices heard on it.’

It came as the Free Speech Union said they were concerned that the actions of the local charity had exposed the teacher to ‘serious disrepute and physical harm’, in a letter to the Charity Commission.

In their letter they said: ‘It should have been clear to the trustee who signed the letter – and indeed to any reasonable person – that merely naming the teacher could endanger his personal safety.

‘Naming him as a sadistic abuser of Islam, in the wake of the murder of Samuel Paty in Paris, was unforgivably reckless.’…