Fraudci said in January 2017 just before Trump was sworn in:

Clear as day he said it.

Video here for any disbelievers: 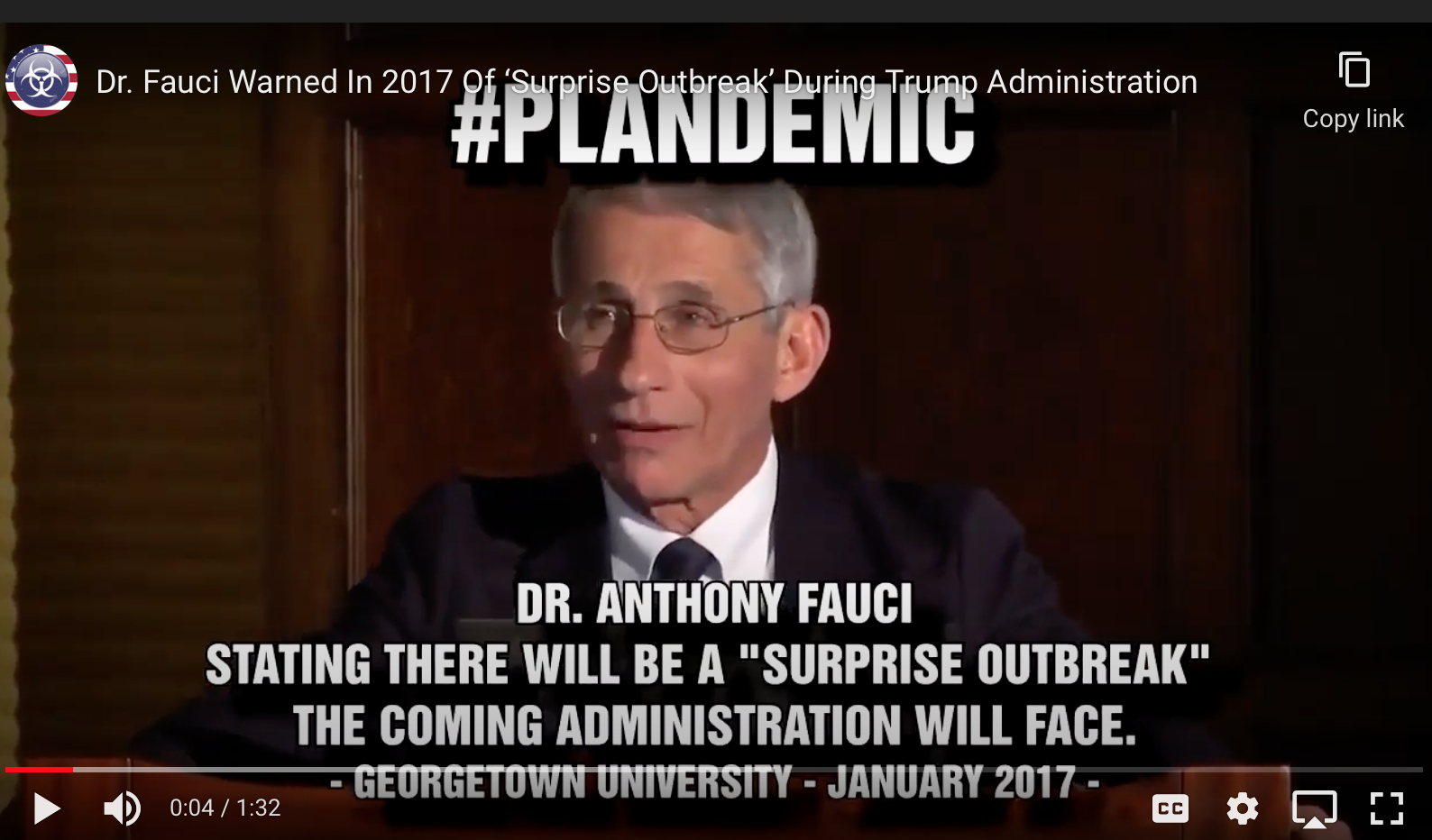 Fraudci’s involvement in the Wuhan lab “research” must be in the middle of this investigation.

The evidence proves that this is true. Fraudci lies.

Dr. Anthony Fauci insisted that no United States taxpayer funds went to bat coronavirus research at a lab in Wuhan, China, despite evidence that a U.S. government-funded grant went to a contractor that did partner with the lab on that research.

Sen. Rand Paul (R-KY) grilled Fauci over the issue on Tuesday at a Senate hearing. He first noted that it is not yet known whether COVID-19 escaped from a lab in Wuhan that was conducting gain of function research, or the modification of naturally occurring animal viruses for research purposes.

Don’t believe a damn thing Fauci says. It was just great watching Sen. Rand Paul making Fauci squirm this morning. I swear I saw a bead of sweat form on his brow. Fauci’s time in the hot seat is just beginning… 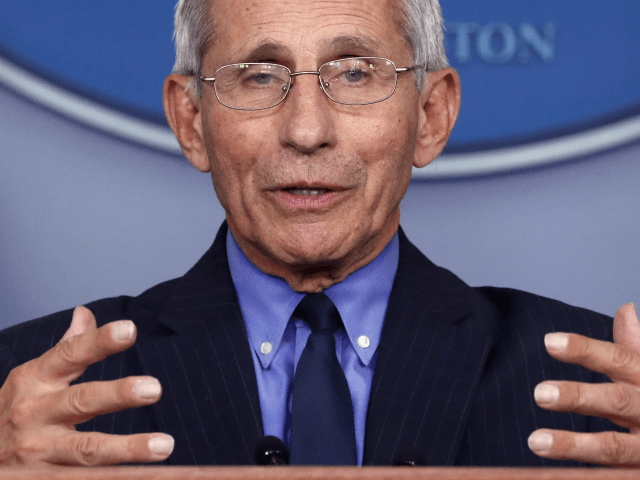 Mea culpa: I spent a lot of time on these here digital pages defending Dr. Anthony Fauci. Brother, was I wrong. Fauci is a stone-cold liar. And if he’s not a stone-cold liar, his only defense is that he is a fraud. Either way, shame on him … and me.

For months Fauci has been everywhere, all over TV, urging Americans to lock themselves down, to abandon their jobs, their sick and dying family members, the small businesses they spent their lives getting off the ground; he urged us to drive our economy into the dirt, pull children who desperately need structure out of school, forgo once-in-a-lifetime graduations and graduation parties, cancel weddings and vacations…

A woman was arrested for reopening the business that fed her family. Christians were persecuted for attending church in the safety of automobiles. Teens were held up to national ridicule for behaving like teens in Florida and the Ozarks. Countless Americans suffered untold anguish after hospital visits were forbidden and funerals canceled. Everyday Americans were relentlessly demonized for daring to speak out or even question the Holy Writ of Fauci…

And God help those who came out to protest the lockdowns, because bitter, power-hungry tyrants such as Gov. Gretchen Whitmer (D-MI) and the hate-filled media that empower her, waved the Holy Writ of Fauci to justify smearing these Americans as racists and punishing them with lockdown extensions.

All this was allowed, all the inhumanity, all the flagrant violations of our Constitutional rights, all these Kafka-esque rules that protected Big Businesses like Walmart and further empowered massive corporations like Amazon, while small business withered and died. Democrat New York Mayor Bill de Blasio was finally allowed to openly practice his antisemitism… All this was excused and even made virtuous by the Holy Writ of Fauci and the Cult of Personality he allowed to build up around his heroic fidelity to facts, science, and public health.

Well, we now know Fauci is either a fraud or liar.

We know this because for ten whole days Fauci said nothing as the Perfect Infection Storm hit America, as massive violations of social distancing and lockdowns took place all across the country (including the Ground Zero of new York City). There it was, everywhere… Fauci’s nightmare scenario come to vivid life: crowd after massive gathering after mob after parade… Protesters and rioters shouting, shoulder to shoulder — and Fauci said nothing… And when he did finally speak out, it was to squeak on some local radio station.

Worse still, Fauci said nothing as the very same sanctimonious health care workers and “experts” who used the emotional blackmail of “We’re at work for you, stay home for us” came out in full-throated support of leaving home and gathering in massive crowds.

Is Fauci a fraud or liar?

Was all his talk about concern for public health, his duty to tell it like it is no matter the personal or political fallout, just a big lie? Is he a fraud who still believes these mass gatherings are a nightmare scenario, but is unwilling to use his massive public platform to say so out loud because shaming protesters who hold the “approved” views among America’s hideous elite would risk Fauci feeling the disapproval of those elites?

Or is he a liar, does he in fact know the coronavirus is nowhere near as deadly as he played it up to be? Is he a liar who mislead us into agreeing to destroy our amazing economy in order to undermine the Bad Orange Man’s re-election?

Either way, Fauci’s a sociopath. Either he’s a sociopath who furthered his political ambitions and abused his authority and public trust to talk hundreds of millions of Americans into shattering their own lives and mental wellbeing when there was no real danger, or he’s a sociopath who chooses the good opinion of elites over raising the alarm to save the lives of thousands and thousands of protesters, and the countless millions those thousands will infect.

For years, Dr. Ralph Baric, a virologist in the U.S., has been collaborating with Dr. Shi Zhengli of the Wuhan Virology Institute, sharing his discoveries about how to create super viruses. This gain of function research has been funded by the [National Institute of Health].

The collaboration between the U.S. and the Wuhan Virology Institute continues. Drs. Baric and Shi work together to insert bat virus spike protein into the backbone of the deadly SARS virus, and then use this man-made super virus to infect human airway cells. Think about that for a moment. The SARS virus had a 15 percent mortality. We’re fighting a pandemic that has about a 1 percent mortality. Can you imagine if a SARS virus that’s been juiced up and had viral proteins added to it to the spike protein, if that were released accidentally?

Paul then asked Fauci if he still supported sending money to the Wuhan lab.

Fauci did not answer the question of whether he supported sending money, but responded, “We do not send money now to the Wuhan Virology Institute.”

Paul pressed further: “Do you support sending money? We did under your tutelage. We were sending it through Eco-Health. It was a sub agency and a sub grant. Do you support that the money from NIH that was going to the Wuhan Institute?”

Fauci again ignored the question and responded, “Let me explain to you why that was done. The SARS-CoV-1 originated in bats in China. It would have been irresponsible of us if we did not investigate the bat viruses and the serology to see who might have been infected in China.”

Nicholas Baker of the New York Magazine said nobody would know if the virus had been fabricated in a laboratory are grown in nature. Government authorities in the U.S., including yourself, unequivocally deny that COVID-19 could have escaped a lab, but even Dr. Shi in Wuhan wasn’t so sure. According to Nicholas Baker, Dr. Shi wondered could this new virus have come from her own laboratory. She checked her records frantically and found no matches. That really took a load off my mind, she said. I had not slept for days.

The director of the gain of function research in Wuhan couldn’t sleep because she was terrified that it might be in her lab. Dr. Baric, an advocate of gain of function research, admits the main problem that the Institute of Virology has is the outbreak occurred in close proximity. What are the odds? Baric responded could you rule out a laboratory escape? The answer in this case is probably not.

Paul tried to press Fauci to say uncategorically that COVID-19 could not have occurred in a lab. Fauci responded:

I do not have any accounting of what the Chinese may have done, and I’m fully in favor of any further investigation of what went on in China. However, I will repeat again the NIH and NIAID categorically has not funded gain of function research to be conducted in the Wuhan Institute of Virology.

As Breitbart News’s Matt Boyle has previously reported, the NIH awarded a taxpayer-funded grant to EcoHealth Alliance entitled “Understanding the Risk of Bat Coronavirus Emergency” and one of the sub-recipients of the grant funds was the Wuhan lab.

A letter from the NIH to EcoHealth Alliance, first reported by Breitbart News, stated (emphasis added):

It is our understanding that WIV studies the interaction between corona viruses and bats. The scientific community believes that the coronavirus causing COVID-19 jumped from bats to humans likely in Wuhan where the COVID-19 pandemic began. There are now allegations that the current crisis was precipitated by the release from WIV of the coronavirus responsible for COVID-19. Given these concerns, we are pursuing suspension of WIV from participation in Federal programs.

While we review these allegations during the period of suspension, you are instructed to cease providing any funds from the above noted grant to the WIV … This temporary action is authorized by 45 C.F.R. § 75.371 (d) (‘Initiate suspension or debarment proceedings as authorized under 2 C.F.R. part 180’). The incorporated OMB provision provides that the federal funding agency, through suspension, immediately and temporarily exclude from Federal programs persons who are not presently responsible where ‘immediate action is necessary to protect the public interest.’ 2 C.F.R. § 180.700 (c).

In addition, the Daily Mail reported: “The Chinese laboratory at the center of scrutiny over a potential coronavirus leak has been using U.S. government money to carry out research on bats from the caves which scientists believe are the original source of the deadly outbreak.” It added:

The Wuhan Institute of Virology undertook coronavirus experiments on mammals captured more than 1,000 miles away in Yunnan which were funded by a $3.7 million grant from the US government. Sequencing of the COVID-19 genome has traced it back to bats found in Yunnan caves but it was first thought to have transferred to humans at an animal market in Wuhan. The revelation that the Wuhan Institute was experimenting on bats from the area already known to be the source of COVID-19 – and doing so with American money – has sparked further fears that the lab, and not the market, is the original outbreak source.

The grant that the Daily Mail story uncovered is a $3.7 million grant issued to EcoHealth Alliance Inc. via HHS, specifically from the National Institute of Allergies and Infectious Diseases (NIAID), which is part of the NIH. Fauci, who has gained enormous fame during the coronavirus crisis at former President Donald Trump’s side, has been the director of NIAID since 1984.