Britain is a failed nation, The establishment looks away & the police are complicit. While gangs of Mohammedans are mass-raping the children of native Brits, the public is being subjected to gaslighting campaigns of “Islamophobia”, which is not only an absurdity but an insult to anyone’s intelligence.

Child Rape Gang Victim: U.K. Police Did Nothing as I Was Abused by ‘Hundreds’ of Paki Muslims

A grooming gang survivor has revealed that she was abused by hundreds of Pakistani heritage men for years, but despite reporting her abusers to the police, none have ever been arrested.

Sarah — a fake name given to protect her identity — said that she was systematically raped and abused as a child in the early 2000s after running away from care homes in Derby.

UK: Art show highlights ‘racism’ against Muslims due to ‘Islamophobia’

1. Islam is not a race, and Muslims are not all of one race. There are Muslims, as well as jihadis, of all races.

2. Opposition to jihad violence and Sharia oppression of women and others is not “racism” or “xenophobia.”

3. Printing slogans on signs in pseudo-Arabic and pseudo-Urdu is not art.

4. Faisal Hussain is not oppressed or marginalized. He is a privileged member of Britain’s new elite. He has an art show featured at a gallery. Would the same gallery feature an exhibition of slogans about opposing jihad terrorism and the oppression of women justified by Sharia? Not on your life. 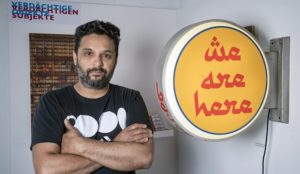 Once you allow Mohammedans  to mass-rape your children, be prepared for the insults from their scribbling women folk:

This vomit-inducing  crap is being served up by a Faima Bakar, who digs it out of her a$$, obviously:

it seems this constant commenting about ‘Muslim grooming gangs’ is specifically being used to shut down important discussions about islamophobia.