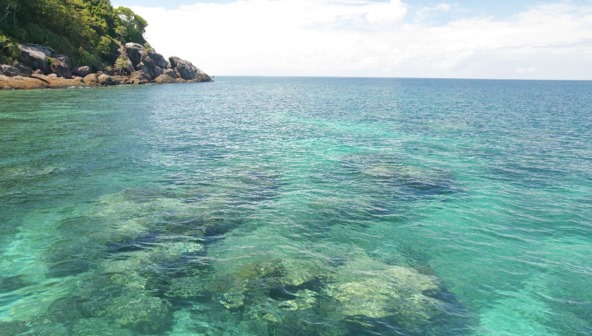 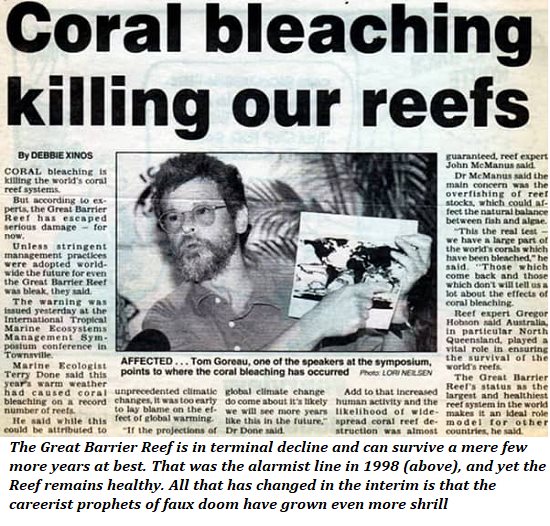 Below are the Frankland Islands rising over the horizon, and up close (below) the largest of them. 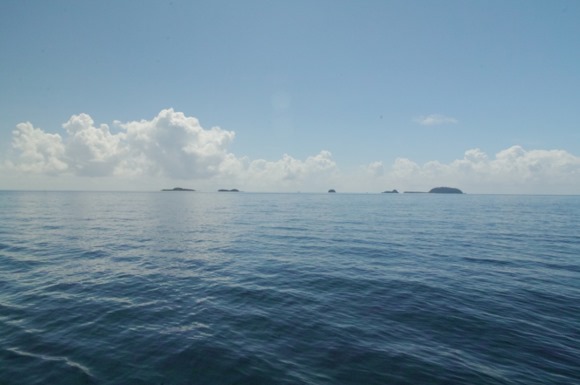 Numerous large old heads of massive Porites corals are conspicuous. The bald tops of the large heads in shallower water have been repopulated by a variety of younger corals (below).

An underwater view makes clear the two-metre height of some of these massive coral colonies (below). 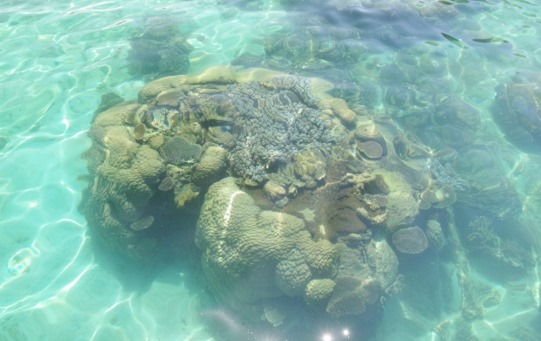 Between the large coral heads are extensive areas densely covered in small, faster growing and more fragile species which are subject to occasional devastation from storms. That many of these fragments continue to live and to grow (below), creating dense beds as seen here attests to a very healthy water quality.
.
The oldest and largest corals are a living logbook. As much as five metres across, they grow at a rate of about 1cm per year on all sides, meaning they are between 120 and 150 years old. The larger ones in shallower water have reached a height where their tops are exposed at the lowest low tides; and, if it rains when they are exposed, the polyps die, leaving them bald on top. Small colonies of various other corals have grown in these bald patches, but their time is limited to a few years before rain on an extreme low tide occurs again. In slightly deeper water the large coral heads are healthy on top.
.
So, what does it mean to find a vibrantly healthy reef area not far offshore of where a major river catchment empties into the GBR lagoon? For a start, it is important to understand that all of the rivers along the GBR coast are highly seasonal, with little or no flow into the lagoon except for occasional brief episodes of flooding which persist only a few days at a time. Even then, this is highly erratic — several such events in some years and only one or none in others. Major floods severe enough to kill corals on reefs within a kilometre or two of a river mouth are uncommon and normally occur only on a decadal to multidecadal frequency.
.
The numerous large old coral heads around the Frankland Islands are testimony to the ongoing health of these reefs for at least the past century, and the abundance of small young colonies of more fragile species attests to the healthy condition of current day water quality.
.
That this is not some inexplicable exception surrounded by widespread devastation; but, is in fact the general condition of the GBR as a whole can also be confirmed. Prior to the virus pandemic a rising tide of doom-crying eco-catastrophism news about the GBR had begun to have a noticeable effect in declining tourism.
.
Unlike the academic “reef experts” (who may spend a couple of weeks on the reef, and usually in a different place, each year) the reef tourism operators go the same places almost every day and are acutely aware of the ongoing healthy condition of their locations. To counter the fake news damaging their business they have created a website featuring a spectrum of reports, images and videos showing the luxuriant condition of the reefs visitors can expect to see wherever they might go on the GBR. More pictoral refutations of alarmism can be found here at Great Barrier Reef Today
.
As to the rivers and the farming, defamed as a threat to the Reef, no actual evidence of such pollution is ever presented. It is all based on hypothetical assumption and unverified, unvalidated computer modelling. The best summary of actual evidence for river water quality in the region published in a peer reviewed scientific journal is Robert M. Carter’s paper, Great News For The Great Barrier Reef: Tully River Water Quality
.
This paper reviews the available data regarding nutrient contents in the Tully River, north Queensland, which is cited as the best (available) evidence for human-related changes in nutrient export from (GBR) catchments [1]. It is shown that the claim of human-related nutrient enrichment in the Tully River, and regionally, is without substance. No detectable trends in GBR water quality have occurred since systematic measurements were first started in the 1980s – Carter (2006).
.
This remains true today and the use of farm chemicals in the region has in fact declined.
.
In regard to the water quality of the Russell and Mulgrave Rivers, perhaps the best indication may be the inhabitants who actually live in it and get their food directly from its water by filtering it. These are the oysters, and they are abundant and healthy.
.
So, where does all this leave us?
.
By far, the greatest threat to the wonderful prosperity of Australia is not climate change, terrorism, COVID or any of the other fears stoked by careerists and an unquestioning media. It is simply the ongoing cumulative effect of an ever-increasing bureaucratic morass of restraints and demands confronting every productive activity and personal freedom itself.
.
Money is best understood as a call on resources, and misdirecting some hundred million dollars of national resources into pretending to “manage” the GBR and “save” it from an endless litany of dubious “threats” is but one relatively modest example. If we cannot soon recognise and effectively address this malignant proliferation of hypothetical solutions to imaginary problems the prosperity we have come to accept as normal may prove to be as distressingly short-lived.
.
A marine biologist, Walter Starck is a frequent contributor