Does that mean the anti-vaxxers & conspiracy theorists were right?

It’s official: the COVID-19 treatment that the Anglo-Swedish laboratory AstraZeneca was working on has been deemed ineffective.

After several weeks of work, the treatment against COVID-19 launched by AstraZeneca was not deemed to be completely effective on patients. This is a new setback for the Anglo-Swedish laboratory, which has already experienced numerous difficulties with its vaccine.

Only a 33% reduction in symptoms

AstraZeneca provided an explanation in a press release:

The trial did not achieve the primary goal of preventing symptomatic Covid-19 cases after exposure .

Another doctor comes out against the vaccines, uses the now painfully obvious to persuade

Dr Joel Hirschhorn is a widely respected doctor who has testified before Congress over fifty times over the course of his career. He spends his days reading medical journals and the latest COVID-19 data. This is a man that is not “fringe” by any means.

A well-respected science writer has published a thoughtful and convincing piece this week that helps confirm what most people with common sense have long believed: COVID-19 wasn’t just randomly discovered in a Chinese wet market; it escaped from a human lab. 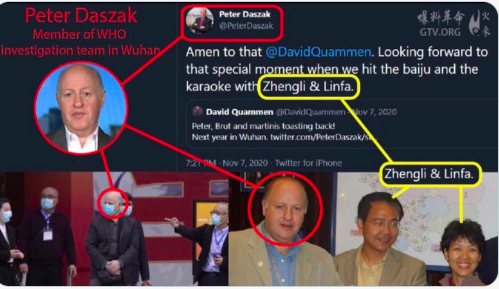 The lab-leak theory was always the most plausible one, but those who raised it as a possible explanation were excoriated by Democrats and media know-it-alls. For no good reason at all, the intelligentsia dismissed it as a baseless conspiracy theory. Remember what happened to Sen. Tom Cotton when he dared to suggest the Chinese government was lying about how the coronavirus originated? The New York Times accused him of appealing to tin-foil-hat-wearing kooks with his “fringe theory.” The Washington Post falsely claimed Cotton’s statements had been debunked.