Can’t help but notice how many top military officials these days sound more and more like some trolling, highly politicized wannabe MSNBC panelist or a pseudo-enlightened NYT op-ed writer than they do apolitical military officers.

I’m so embarrassed of our military, what the fuck happened to them

First the threat was climate change

Then it was white supremacy

What is the army for again? 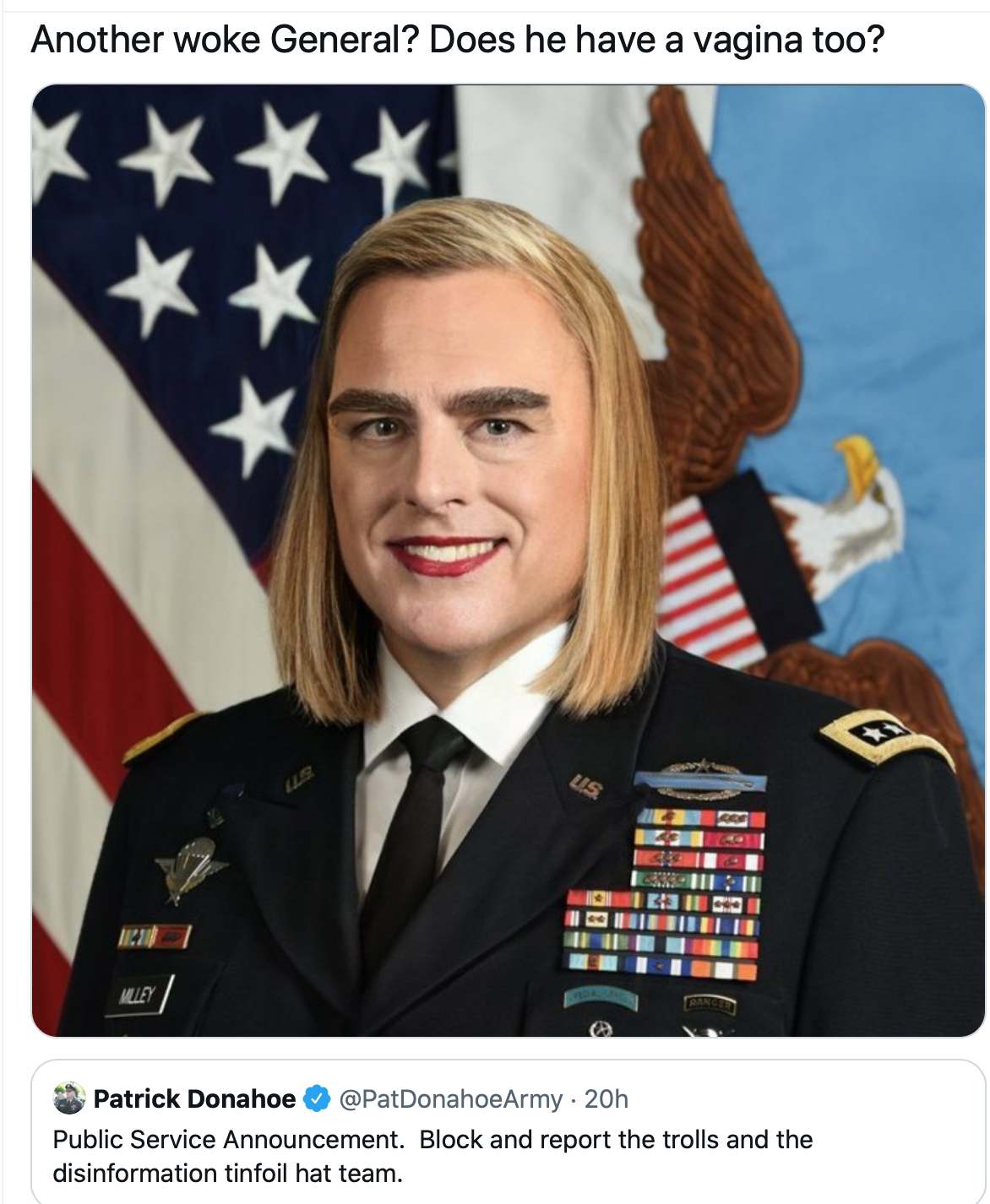 A United States Army Major General lashed out at critics on Twitter and asked his Twitter followers to “block and report” people he called “trolls” and “the disinformation tinfoil hat team,” after they criticized one of his tweets urging people to get vaccinated.

Army Maj. Gen. Patrick Donahoe, commanding general of the U.S. Army Maneuver Center of Excellence at Fort Benning, on Thursday, July 22, quote-tweeted an earlier tweet warning of the Delta variant and urging people to get the vaccine. He tweeted:

3 weeks ago. Since then we’ve seen a spike in young trainees in the ICU, spike in trainees arriving positive, and it moves quick in the formation. To get ahead get the shot. Takes five weeks to build the immunity. If you havent done so, do it right now. Delta variant aint playing.

A Hillsdale College graduate student and Marine veteran, Josiah Lippincott, responded to his tweet, saying there were 26 military suicides in the 4th quarter of 2020 — the same number as total military deaths due to the coronavirus. “The lockdowns, liberty restrictions, quarantines, and general disruption of servicemember’s lives is a way bigger killer than the virus,” he said, posting a Department of Defense graph.

Your false equivalency of suicide compared to the virus doesn’t hold up. Why don’t you compare auto accidents while you’re at it. Your apparent aversion to the vaccine is wrong headed. It’s the way to normalcy while saving lives. In 1918 people prayed for a vaccine.

Lippincott responded: “Suicide is an intentional act. Car accidents are not. When policy treats healthy soldiers as biological hazards we shouldn’t be surprised by an increase in suicide and psychological problems.”

Donahoe than tagged Hillsdale College and tweeted: “Hey @Hillsdale come get your boy.

After another Twitter user asked Donahoe, “Hey general how many wars have you won,” Donahoe responded, “Don’t be a shill for Putin.”

Donahoe than tweeted the following day: “Public Service Announcement. Block and report the trolls and the disinformation tinfoil hat team.”

Lippincott tweeted a screenshot showing that Donahoe had blocked him.

“He blocked me for asking questions. Pretty thin skinned for a two-star!”

Breitbart News reached out to U.S. Army Chief of Public Affairs to ask whether Donahoe’s tweets represent the U.S. Army, but did not receive a response by deadline.

Donahoe’s tweets drew public criticism, including from a congressman.

Sadly, current Pentagon leadership models this behavior rather than deterring it among the ranks. Milley et al have done more to disintegrate the apolitical ethos of the military than any General officer leaders in history that I can think of.

Lippincott himself slammed Donahoe in an American Mind piece on Monday, writing:

My interaction with the General serves as a microcosm of the American military’s cultural rot. Here we have a two-star General who spends his days on social media hyping a vaccine for an illness that poses minimal risk to his troops. When pressed on why America can’t win wars and why he embraces policies that treat healthy people like biohazards, his first response is to accuse his critics of treachery and then block them from view.

This is what $693 billion a year buys you: unbridled arrogance from the leaders of a military that can’t win against third world tribesmen armed with small arms and homemade explosives. A significant portion of our military leaders, like General Donahoe, are totally detached from reality. They face no consequences for losing wars or losing troops to preventable suicides. Many of them don’t really command anything at all. They are so ensconced in layers of bureaucrats, staff, operations and logistics shops, briefs, intelligence reports, public affairs officials, and aides that there is usually no danger of the public uncovering their true character, lack of leadership, or empty careers.

It is not the first time senior military leaders have drawn public criticism for tweets.

U.S. Army Training and Doctrine Command Commanding Gen. Paul E. Funk was one of those slamming Carlson on Twitter.

He tweeted photos of female soldiers along with: “Hey @TuckerCarlson, this is my Squad and they’re @USArmy Strong. You’d be lucky to meet them. #VictoryStartsHere.”