Biden’s contempt for liberty is shameful.

Many of the protesters are young people to whom Fidel Castro’s revolution is ancient history. They sometimes chant “we are not afraid” and carry American flags as proud symbols of freedom. They may fail in overthrowing the regime, but they are nevertheless dangerous because their movement can grow quickly if they get US support.

That support is not forthcoming. 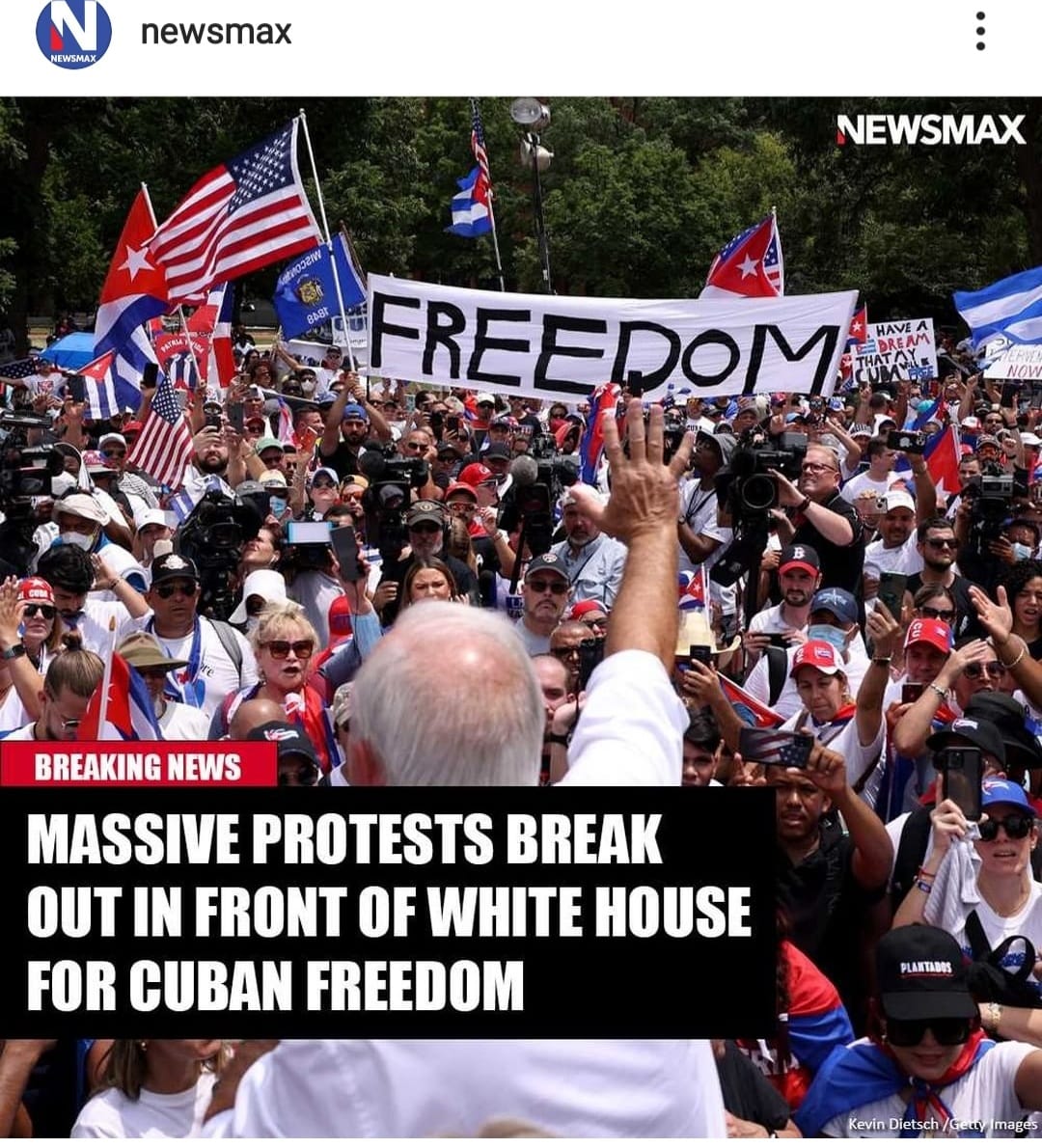 Tensions rose in front of the White House Sunday as a small group of socialists in defense of the Cuban communist regime attempted to confront a peaceful assembly in support of the rights of Cuban people.

Lilia Gort, who was participating in the much larger assembly against communism, came from Tampa, Florida, because, as she told Breitbart News, “We want freedom for our people in Cuba. The Cuban people don’t have any rights. We don’t have freedom of speech. It’s been like this for 61 years or more. The children don’t have any food. They don’t have medicine.”

“The people are being pulled out of their houses right now and they are being killed because on July 11, they went out on the streets to protest because they are tired of living in misery,” Gort continued, appearing to reference video footage smuggled out of Cuba of state security conducting door-to-door raids and shooting unarmed civilians in their homes, sometimes in front of their children.

“They are tired of not being able to speak and say what they want to say. They have no food. They have nothing,” Gort continued. “They need our help. They need President Biden to step up. … All we want is freedom. We don’t want no money. We don’t want COVID [coronavirus] shots. We need help. That’s what we want.”

Cuban-American Abraham Corces came from New York City to D.C. to protest in support “for the Cuban people and to ask for freedom.” Corces said, “I would like Sleepy Joe to wake up and see that communism and socialism is a failed system and our neighbors 90 miles away need our help right now, the same way we’ve helped many other nations.” (emphasis added)

Cuban-Americans calling for freedom created a living art piece representing what is happening in Cuba. The demonstration served as the background while speakers called for the end of the Castro Regime. 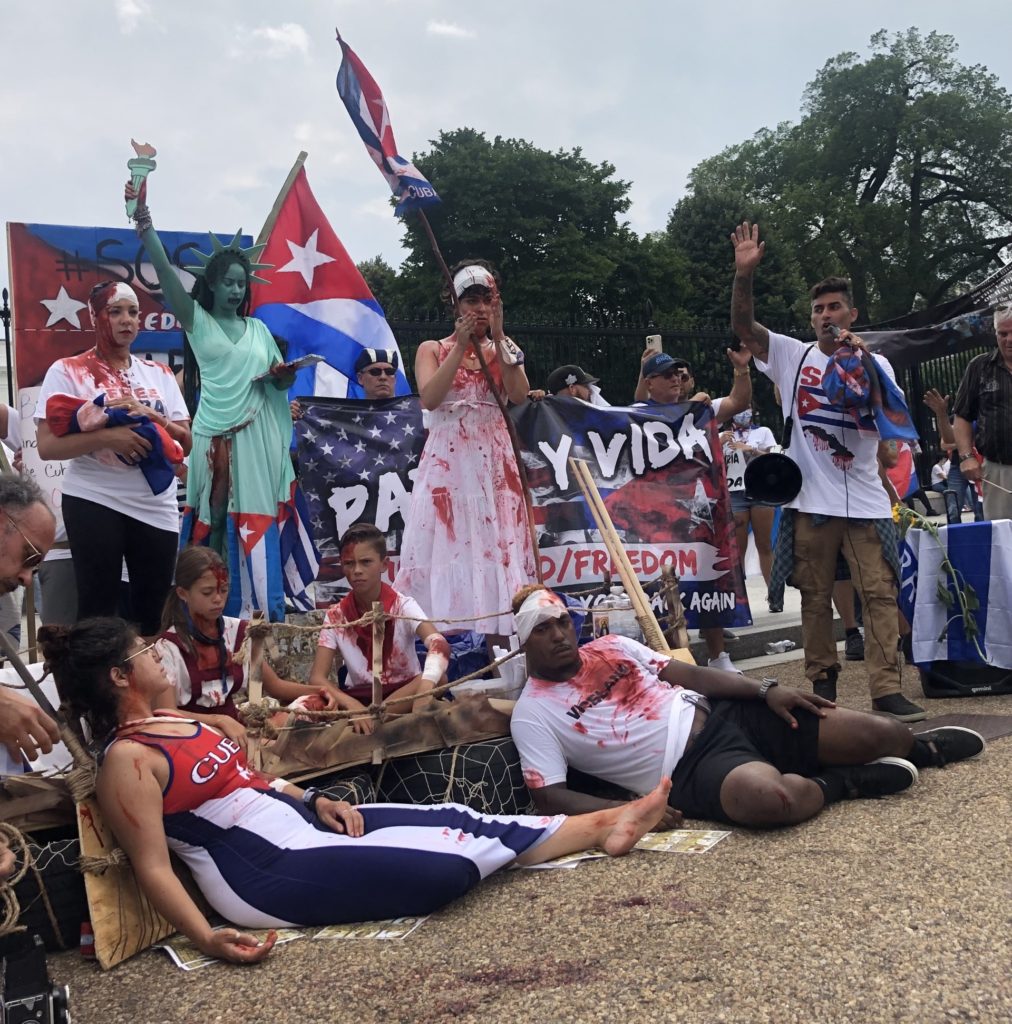 The art display in front of the White House Sunday featured Lady Liberty with her lips sewn symbolically shut and protesters, including children, marred with fake blood. (Madeleine Hubbard/Breitbart News)

Authorities separated the pro-regime group, which claimed to assemble to call for an end to the few sanctions still in place on the Castro regime, from the Cuban-Americans with an orange plastic barrier in the park. They passed out copies of Liberation, the “Newspaper of the Party for Socialism and Liberation.” Despite attempts for interviews, all members of this group who were asked declined. Breitbart News obtained a copy of the socialist paper, which claimed the protests on July 11 “involved elements that receive money and other support from the U.S. government.” No evidence has surfaced to support U.S. involvement in the protests, most of them spontaneous, since the protests began.

The socialists claimed sanctions on high-ranking, and extremely wealthy, Castro regime officials caused “grave shortages of food, medicines, electricity and other necessities of life.” In reality, American sanctions on Cuba exempt humanitarian aid, including food and medicine, and the U.S. has no involvement in any way with the failures of the Cuban power grid.

In 2019, the United States exported millions worth of U.S. medical goods to #Cuba.

Liberation also falsely claimed, “There are elections in Cuba … Unlike in the United States, corporations and rich donors play no role in elections.” According to Freedom House, a human rights organization, “Cuba is a one-party communist state that outlaws political pluralism, bans independent media, suppresses dissent, and severely restricts basic civil liberties.” No candidates outside of those approved by the Party appear on the few election ballots organized by the regime.

When asked about the counterprotesters, Gort told Breitbart News, “They don’t care about the Cuban people. They want communism. So, if they want communism, why aren’t they in Cuba? Why did they come here? Why are they standing there?”

“They don’t give a damn about the Cuban people. All they care about is sitting there and talking a lot of bull,” Gort added. “They don’t have families like us. There’s mothers here. … Their children are being killed. Okay? Those people probably don’t have them, because if they did, they won’t be there.” 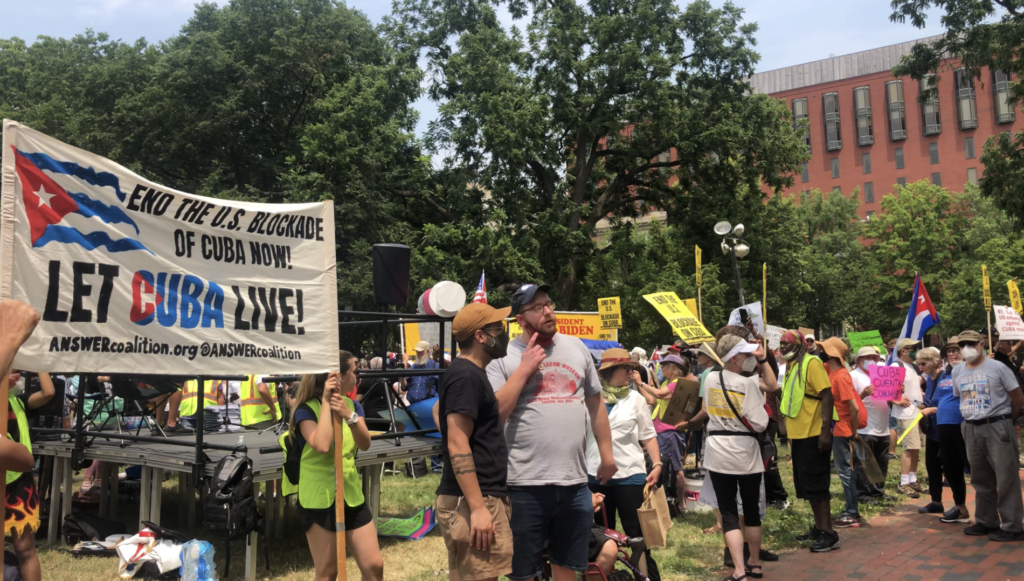 Protesters with the radical leftist ANSWER Coalition demand an end to American sanctions communist officials in Cuba on Sunday, July 25, 2021, in front of the White House. (Madeleine Hubbard/Breitbart News)

Carlos Monzon traveled from Cuba to the United States when he was 6 years old on a boat to the Florida Keys. He said, “That island is not a beautiful paradise. It’s hell. It really is hell.”

“I want Cubans to be free. It’s hard, because like, I voted for the guy in the [White] House right now and all I want is unfettered internet.” Internet in Cuba was shut down this month in an attempt to silence protesters and prevent them from organizing.

While Monzon said he’s not in favor of capitalism and thinks it needs checks and balances, he says when it comes down to socialism versus capitalism, he will support capitalism, “10 out of 10 times.”

“Obama lifted the sanction that got me into this country. That actually, genuinely, was … a stab in the heart,” Monzon said. 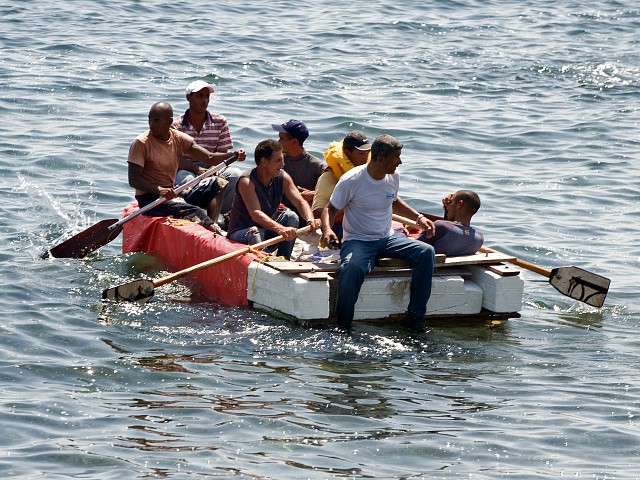 Seven would-be Cuban emigres remain in a homemade boat moments before being arrested by Cuban military agents after their attempt to escape from the island nation was thwarted by the sea currents, on June 4, 2009, in Havana. (AFP/Adalberto Roque)

He wore a shirt with the phrase, “It’s not the embargo.” Monzon explained, “We don’t want the embargo lifted” because trade will support the communist dictatorship. The Communist Party controls all businesses on the island – including hotels, tourist restaurants and bars, and stores where Cubans can buy basic goods only through the use of ration cards. Even remittances to family in Cuba, Monzon contended, would ultimately fund the repression of the Cuban people.

Olga Gil came to the United States from Cuba as a teenager. She told Breitbart News the protests are not about the embargo, but about freedom.

The people in Cuba, even the young generation, are asking for freedom. They are able to provide everything for themselves. They could provide food. They are very hardworking people. We need freedom,” she said. “They [Cuban people] want a future for themselves.”

In a plea to the Biden Administration, Gort told Breitbart News, “I want them [the Biden administration] to help us get freedom, because when Biden needed a lot of our Cuban votes, because I’m from Florida. And when him and Kamala came to Florida and he wanted our help, I was one of the ones, just like millions of Cubans, voted for him and he hasn’t done anything for us. Nothing. He needs to step up because he has helped a lot of other countries. Why not Cuba? Is he a communist too? That is my question for you Biden. I voted for you. You haven’t done nothing for my people.”

According to Pew Research Center, 1.4 million Cuban-Americans were eligible to vote in 2018. An NBC News exit poll revealed 55 percent of Cuban-Americans in Florida voted for Trump in 2020. 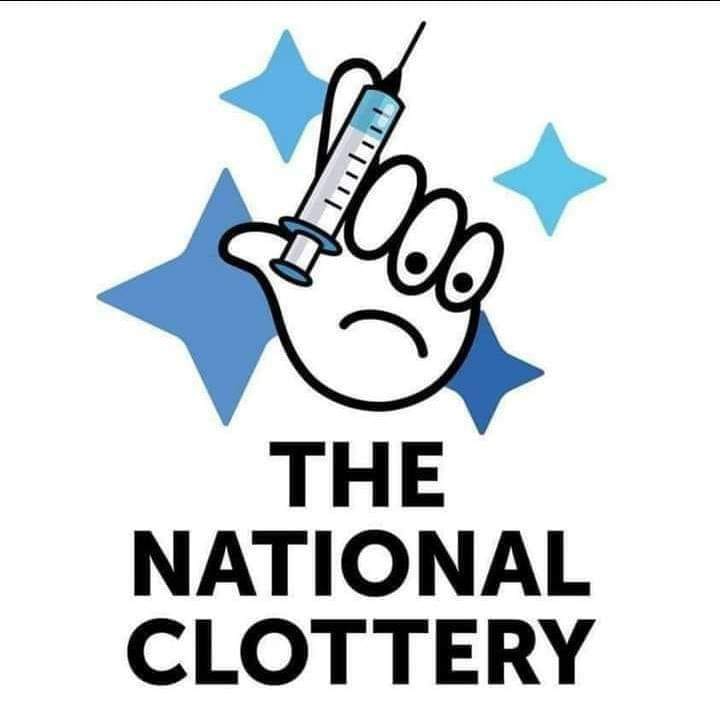 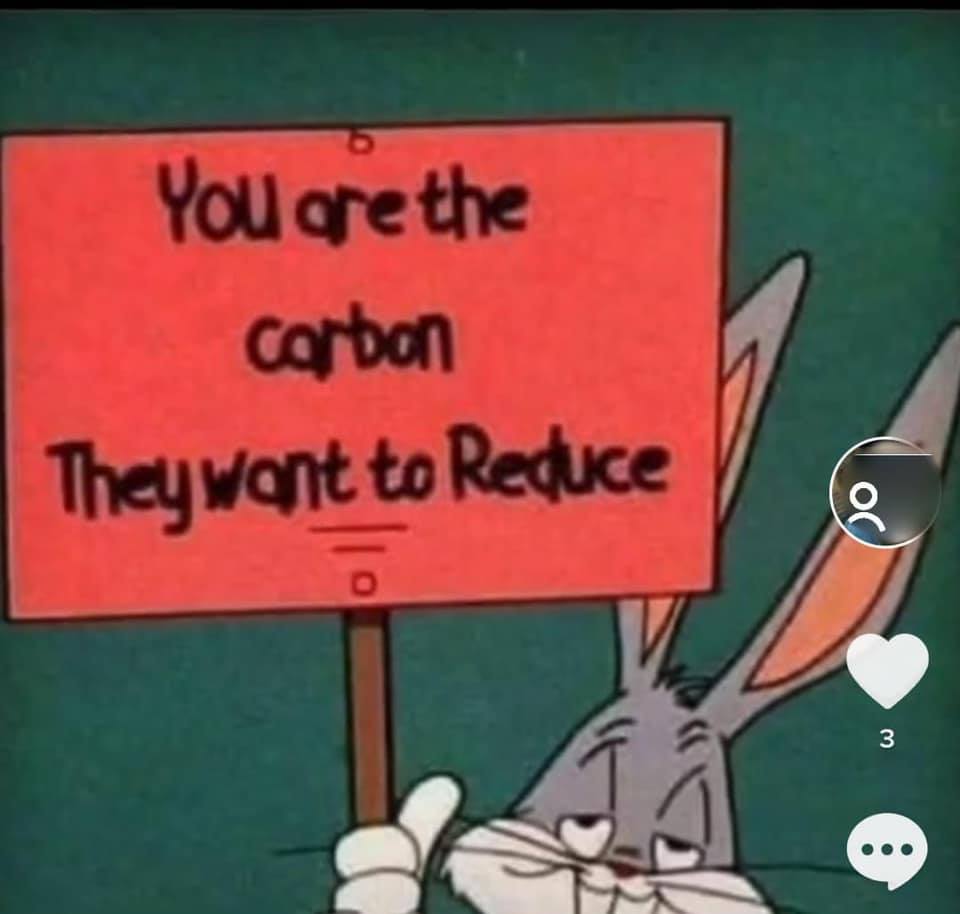