Darker than an Emu’s A$$hole

Now is the moment for you guys to take a knee, wave some of Ernie Dingo’s sacred smoke around and acknowledge that Bruce is more than amazing. He is bloody brilliant. 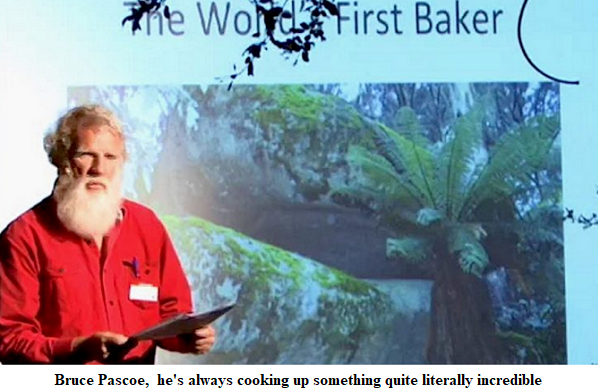 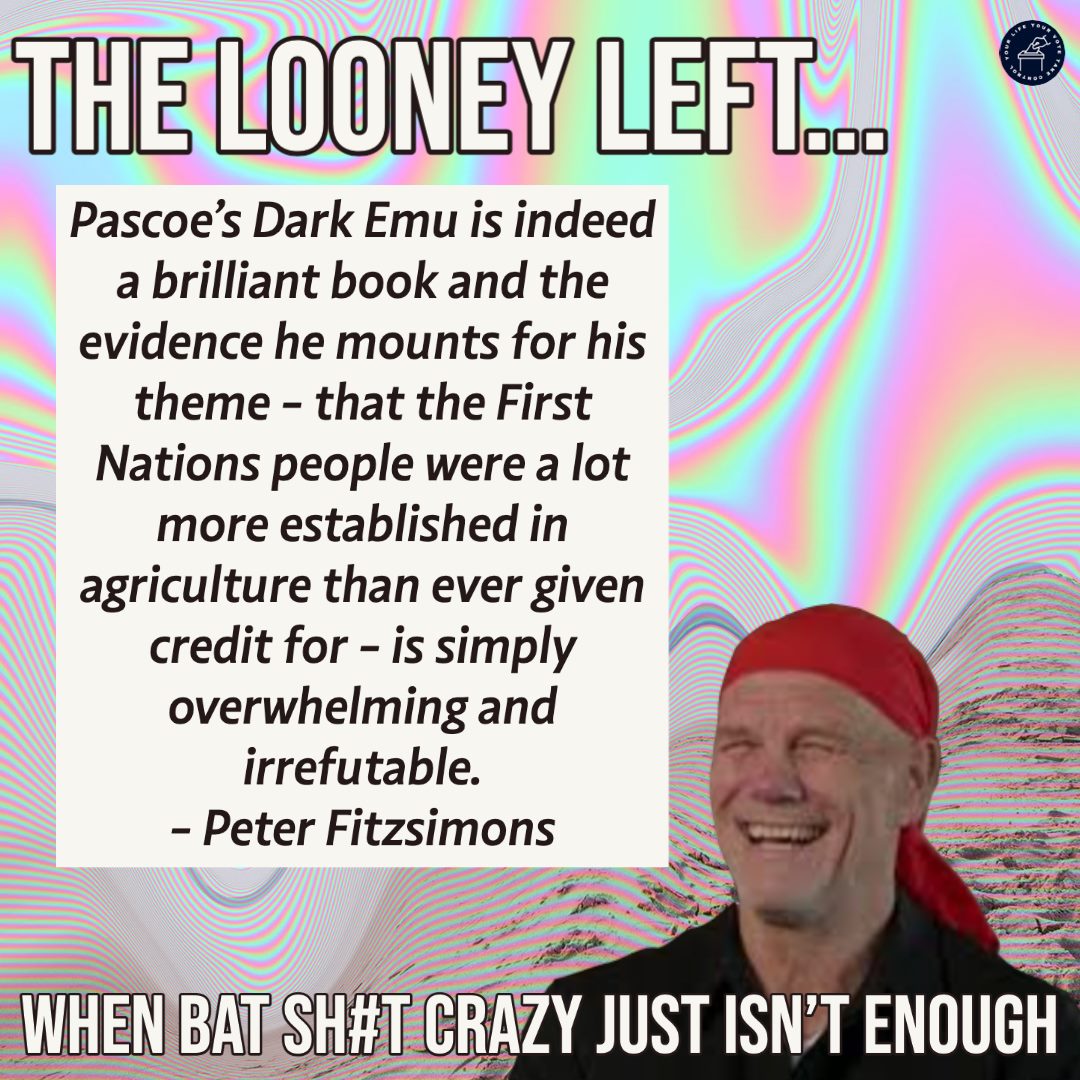 Bruce Pascoe’s fantastical revision of Australia’s aboriginal history has been questioned for a few years now.
Andrew Bolt was tipped off about the Pascoe fibs by a number of diligent researchers, one of which is the website Dark Emu Exposed.
Lawyer and former Public Prosecutor, Josephine Cashman, has been belling the cat for a good year or two.
However, instead of looking at Pascoe’s fantasy with any skepticism, most journalists attacked the skeptics, and supported the lies. 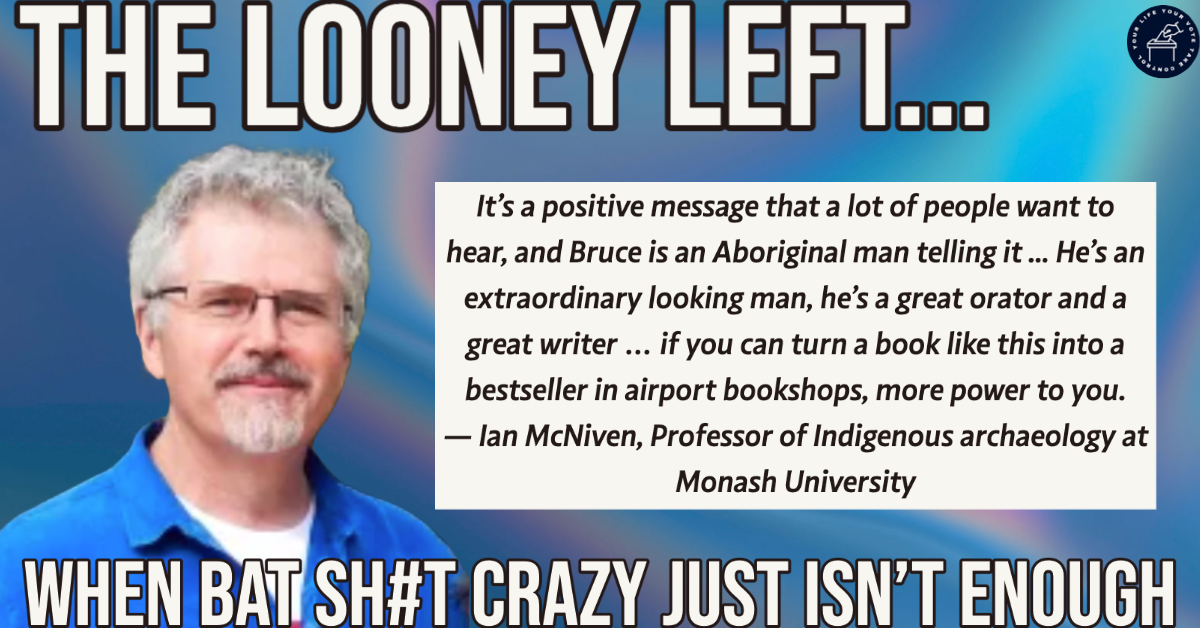 Here are just a few of Pascoe fellow dreamers, now with Emu egg on their collective faces today, after the very Left Melbourne University Press (MUP) has published a book by a credible anthropologist and archaeologist, smashing Pascoe’s invented version of history.
The ABC’s Ellen Fanning
The ABC’s Benjamin Law
The ABC’s Wendy Harmer
Former ABC Insiders producer Kate Torney
The ABC’s Virginia Trioli
The ABC’s Patricia Karvelas
More details in this post below by Bolt…from 2019.
It’s a devastating portrayal of the fools who fell for the Pascoe fiction.

HERE ARE ABC JOURNALISTS WHO DEFEND UNTRUTH. AND HERE’S WHAT THEY EXCUSE

Senior ABC journalists have failed the Bruce Pascoe test. Journalists should demand the truth. But when faced with clear evidence that this “Aboriginal historian” made wild claims about an Aboriginal “agricultural industry” after misquoting sources, redrawing a map and inventing evidence, the following ABC staffers defended Pascoe and their tribe.

Journalists should demand the truth. But when faced with clear evidence that this “Aboriginal historian” made wild claims about an Aboriginal “agricultural industry” after misquoting sources, redrawing a map and inventing evidence, the following ABC staffers defended Pascoe and attacked his critics.

How can you trust the following “journalists” to ever tell the truth when the facts contradict their tribal faith?

The ABC’s Ellen Fanning apparently believes truth is what some yarn-teller she likes says it is:

Actually, Pascoe refuses to answer my questions on his genealogy, he refuses to come on my show, and in the essay Fanning mentions he admits to deep confusion about who his “Aboriginal ancestors” actually were, and the records strongly suggest they never existed.

But is Fanning even remotely interested in the truth?

Meanwhile, the ABC’s Benjamin Law apparently believes that truth is the opposite of what anyone he hates says it is:

The ABC’s Wendy Harmer apparently believers the truth is what someone told you, even if facts later show that person totally misquoted his sources:

Former ABC Insiders producer Kate Torney, now head of the State Library of Victoria, apparently believes truth is decided by a popularity contest. She retweets this:

The ABC’s Virginia Trioli apparently believes the truth is what anyone claiming to be Aboriginal says it is, and it is racist to doubt them. She retweeted that I was racist.

Now, to demonstrate what they are defending as “truth”, here is just one of scores of examples of how Bruce Pascoe totally rewrites his sources to invent something untrue.

One of his main sources is the 1849 journal that Charles Sturt wrote of his expeditions. There is one passage that Pascoe draws on repeatedly – where Sturt meets Aborigines out around Cooper Creek.

Here  are the relevant excerpts, but read the whole of Sturt’s account for yourself. In bold are facts that Pascoe later completely rewrites, as I shall later show:

Thus, in the space of less than five miles, we were introduced to four different tribes, whose collective numbers amounted to seventy-one. The huts of these natives were constructed of boughs, and were of the usual form, excepting those of the last tribe, which were open behind, forming elliptic arches of boughs, and the effect was very pretty…

We reached the hill soon after the natives had gone over it, and on gaining the summit were hailed with a deafening shout by 3 or 400 natives, who were assembled in the flat below…

The scene was one of the most animated description, and was rendered still more striking from the circumstance of the native huts, at which there were a number of women and children, occupying the whole crest of a long piece of rising ground at the opposite side of the flat…

Had these people been of an unfriendly temper, we could not by any possibility have escaped them, for our horses could not have broken into a canter to save our lives or their own. We were therefore wholly in their power, although happily for us perhaps, they were not aware of it; but, so far from exhibiting any unkind feeling, they treated us with genuine hospitality, and we might certainly have commanded whatever they had. Several of them brought us large troughs of water, and when we had taken a little, held them up for our horses to drink… They likewise offered us some roasted ducks, and some cake.

When we walked over to their camp, they pointed to a large new hut, and told us we could sleep there, but I had noticed a little hillock on which there were four box-trees, about fifty yards from the native encampment, on which, foreseeing that we could go no farther, I had already determined to remain, and on my intimating this to the natives they appeared highly delighted…

The men of this tribe were, without exception, the finest of any I had seen on the Australian Continent. Their bodies were not disfigured by any scars, neither were their countenances by the loss of any teeth, nor were they circumcised. They were a well-made race, with a sufficiency of muscular development, and stood as erect as it was possible to do, without the unseemly protrusion of stomach, so common among the generality of natives. Of sixty-nine who I counted round me at one time, I do not think there was one under my own height, 5 feet 10 3/4 inches, but there were several upwards of 6 feet. The children were also very fine, and I thought healthier and better grown than most I had seen, but I observed here, as elsewhere amongst smaller tribes, that the female children were more numerous than the males, why such should be the case, it is difficult to say. Whilst, however, I am thus praising the personal appearance of the men, I am sorry to say I observed but little improvement in the fairer sex. They were the same half-starvedunhappy looking creatures whose condition I have so often pitied elsewhere…

The natives told us, that there was no water to the eastward, and that if we went there we should all die. They explained that the creek commenced on the plains, by spreading out their fingers as the old man had done, to shew that many small channels made a large one, pointing to the creek, and they said the water was all gone to the place we had come from; meaning, to the lower part of it…

The smallness of the water-hole, on which these people depended, was quite a matter of surprise to me, and I hardly liked to let the horses drink at it, in consequence. At sunset all the natives left us (as is their wont at that hour), and went to their own encampment; nor did one approach us afterwards, but they sat up to a late hour at their own camp, the women being employed beating the seed for cakes, between two stones, and the noise they made was exactly like the working of a loom factory…

…in the morning, we saddled and loaded our horses, but none of the natives came to us until we had mounted; when they approached to take leave, and to persuade us not to go in the direction we proposed, but to no purpose. The pool from which they drew their supply of water, was in the centre of a broad shallow grassy channel, that passed the point of the sand hill we had ascended…

Now to Pascoe’s astonishing rewriting of Sturt’s account – a rewriting that these ABC “journalists” seem not to notice or to mind.

Pascoe turns Sturt’s horses into just one horse, and invents a claim that the rest were eaten:

They’ve eaten all their horses but one. They’ve got no water, they’ve got no food, they’re dying… the horse they had left couldn’t have run to save its life

There were nearly 1000 people living there, in this little model community with timber and thatch houses, beautiful dwellings, which Sturt describes quite well.”

Pascoe turns a small waterhole or “pool” into a deep well:

They had dug a well which I think was 70 foot deep, to provide their water. You know, that’s an engineering feat. It’s not a hole in the ground. It’s a piece of engineering.

Pascoe turns a tribe where the women are “half starved” into a “thriving” community:

In Dark Emu he repeats this claim:

People here were not clinging on to survival in the desert; they were thriving…

Pascoe turns an impermanent “encampment” into an “estate” and turns “huts” into “houses”:

The Europeans were then offered the pick of the houses in a new estate built on the bank of the Warburton River.

(Frederick Rose) … talks about the incredible labour required in milling and winnowing that grain, but never the scale of the operation — despite Sturt’s description of the evening whirring of hundreds of mills grinding grain into flour.

Pascoe then invents whole scenes that Sturt never mentions – like this claim in a talk of  children being put to bed by 10pm when all Sturt said was that they’d stayed up to “a late hour”:

He said it was mesmerising, the lifestyle that these people had. And as the meals were finished he could hear women putting children to bed and by 10 o’clock at night the whole village was silent.

Also invented in Dark Emu – store houses and animal pens that Sturt never described (and what animals could have been kept in those “pens” out near the Cooper?):

Another invention by Pascoe in an interview – Sturt praising the cakes he was offered as the  “best cake he had ever eaten”, describing its flavour and even giving the recipe:

Sturt repeatedly described the cake as the “best cake he had ever eaten”, even after his hunger had been satiated. “He describes it in great detail, he describes the method of the milling, the flavour, and he even goes as far as to give a short recipe,” Mr Pascoe said.

What “recipe”, Bruce? Let’s cook one and taste.

Another  invention- Pascoe’s claim  in a lecture that these people were “murdered” shortly afterwards, a claim for which no evidence exists:

To repeat, this is just one passage of many that Pascoe rewrites.

This is the ludicrous and inexusable rewriting of history that ABC “journalists” defend, in a book they recommend and which the ABC will next year turn into a two-part TV documentary.

This is not just a scandal. It is frightening evidence that post-modernism has destroyed all respect for truth.

Truth is now what the biggest and nastiest mob says it is in pushing their ideology.

Reason is dead, and ABC presenters are capering on its grave and taking selfies:

Thought I’d successfully played it cool with everyone at #ByronWF2019 then met this legend at the airport carousel and promptly lost my mind and shit. pic.twitter.com/GPZE4v0JhV