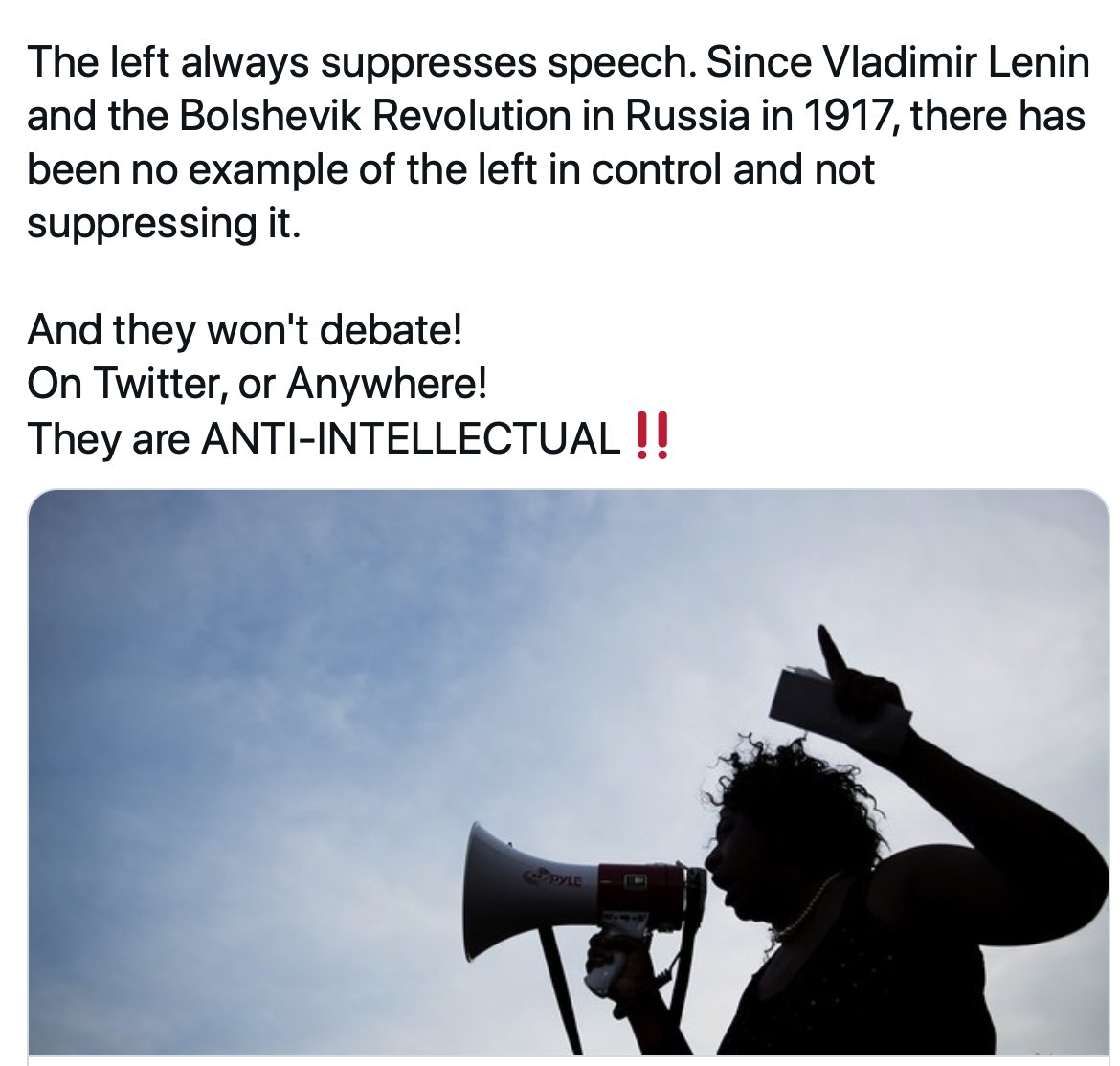 Let us begin with this fact: The left always suppresses speech. Since Vladimir Lenin and the Bolshevik Revolution in Russia in 1917, there has been no example of the left in control and not crushing dissent.

That is one of the important differences between liberal and left: Liberalism and liberals believe in free speech. (The present leftist threat to freedom in America, the greatest threat to freedom in American history, is made possible because liberals think they have more to fear from conservatives than from the left. Liberals do not understand that the left regards liberals as their useful idiots.)

The left controls nearly every “news” medium. There is little or no dissent in the mainstream media — not in the “news” sections and not in the opinion sections.

The left controls Hollywood. No dissent is allowed in Hollywood.

That is why we have “cancel culture” — the silencing and firing of anyone who publicly dissents from the left, and even “publicly” is no longer necessary. The National Association of Realtors has just announced that if you express dissenting views (on race, especially) in private, you may be fined and lose your membership in the organization — which effectively ends your career as a realtor.

So, we return to the opening question: Why does the left need to crush all dissent? This is a question made all the more stark because there is no parallel on the right: Conservatives do not shut down dissent or debate.

The answer, though the left will not acknowledge it, is the left fears dissent. And they do so for good reason. Leftism is essentially a giant balloon filled with nothing but hot air. Therefore, no matter how big the balloon — the Democratic Party, The New York Times, Yale University — all it takes is a mere pin to burst it.

Leftism is venerated by intellectuals. But there is little intellectual substance to leftism. It is a combination of doctrine and emotion. The proof? Those with intellectual depth do not stifle dissent; they welcome it.

That is why universities are so opposed to conservatives coming to speak on campus. One articulate conservative can undo years of left-wing indoctrination in a one-hour talk or Q and A. I know this from personal experience on campuses. You can, too. Watch the speeches given by any conservatives allowed to speak on a campus — many of these talks are still on YouTube — and you will see large halls filled with students yearning to hear something other than left-wing pablum. Look at their faces, filled with rapt attention to ideas they never heard that are clearly having an impact. Universities are entirely right to fear our coming to speak. We come with the pin that bursts their $50,000-a-year balloon.

That is also why it is so hard to get any of them to debate any of us. In 35 years of radio, I have never mistreated or bullied a guest. I was unfailingly polite to an icon of the left, Howard Zinn, the America-hating author of the America-hating “A People’s History of the United States.” I even invited a UCLA political science professor and violinist, one of seven members of the Santa Monica Symphony Orchestra who refused to play when I conducted the orchestra in a Joseph Haydn symphony in the Disney Concert Hall — solely because I’m a conservative. Despite his public letter, in which he accused me of holding “horribly bigoted positions” and wrote, “Please urge your friends to not attend this concert, which helps normalize bigotry in our community,” I nevertheless invited him on my national radio show. He agreed. I had him in studio for an entire hour and treated him and his wife (who accompanied him) with great respect, despite my contempt for his false accusations and his advocacy of the cancel culture. Every American should hear that hour.

Unfortunately for the emotional and intellectual health of our society, he, Zinn and a few others were anomalies. Of the 100 or so left-wing authors, professors and columnists invited to appear on my show, almost none has responded in the affirmative. They prefer NPR, where they are never challenged.

The opposite, however, is not true: Every conservative intellectual I know says yes to every one of the (very few) left-wing invitations we receive. Of course, we are almost never invited. We regularly invite leftists. Leftists almost never invite us. They claim it’s because we are not up to their intellectual level and they have no desire to waste their time. One would think that the opportunity to publicly show how vapid we conservatives really are would be too good to pass up.

Leftists do not debate us or appear as guests on our shows and prevent us from speaking whenever possible, because they (correctly) fear conservatives. Race-baiters such as Ibram X. Kendi or Ta-Nehisi Coates or “White Fragility” author Robin DiAngelo would never debate Larry Elder, for example. Why won’t they? Because they would be shown to be the intellectually shallow purveyors of hate they are. Deep down, they know it. Larry Elder is one of many conservative black intellectuals who left-wing blacks (and whites) refuse to debate.

Here’s an article that gives hope from February 2021. We shall revisit it from time to time to see if there’s any progress. For myself, I am utterly pessimistic & disillusioned, knowing what kind of leftist ideologues are infesting our universities. They will defend their turf come hell or high water, and nothing short of their ousting will bring change. Change, for once, that would usher in a new era. Provided the replacement of the old Stalinist blockheads can be young enthusiastic conservatives who cherish Western civilisation.

Chancellors join the fight for freedom of expression