Blow it up with their woke school boards & their social engineers!

This cannot go on. 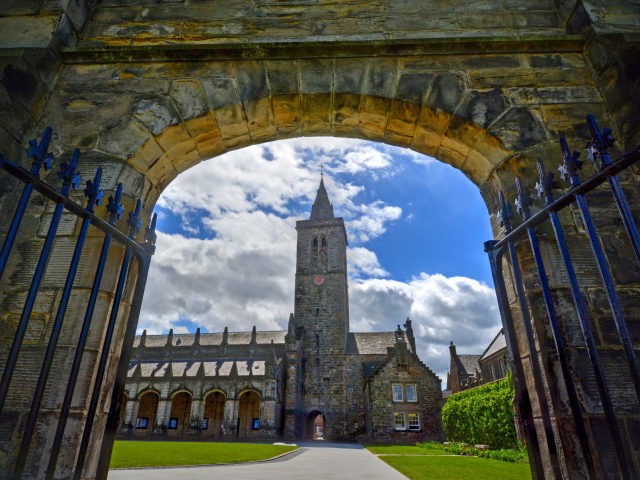 Matriculating students at St Andrews University must pass courses where they accept their “personal guilt” in order to confront their “unconscious bias” before starting their programme, according to test material seen by The Times.

The university in Fife, Scotland, this year became the first to ever beat Oxford or Cambridge to the number one spot on the UK’s Good University Guide and is the alma mater of the future king, Prince William and his wife Kate, the Duchess of Cambridge.

The Times said that the top university has mandatory modules on diversity, consent, and climate change and claimed failure to pass them would mean the students cannot enrol.

In reaction, the University of St Andrews defended itself, calling the Times report “inaccurate” and claiming that the programmes have been in place for five years, most of which were designed by students, with only “one” person complaining during that time.

According to the newspaper of record’s report, in order to pass, students must agree to statements such as: “Acknowledging your personal guilt is a useful start point in overcoming unconscious bias.”

“It is important to think about and understand our own prejudices and stereotypes so we don’t treat someone else unfairly or inappropriately,” said another.

White Males are the Only Demographic in Britain Experiencing Declining University Admissions https://t.co/XfX3BcnZdF

Answering ‘yes’ to the question, “Does equality mean treating everyone the same?” returns as a wrong answer, however, with the student sent the message in the online assessment: “That’s not right, in fact equality may mean treating people differently and in a way that is appropriate to their needs so that they have fair outcomes and equal opportunity.”

Too many ‘wrong’ answers will result in failure, with the option to retake the induction module.

A spokesman for the university told the newspaper of record that their students had requested the majority of the courses. In further comments to the Daily Mail, St Andrews said: “The Times report is inaccurate and misleading. These modules have been in place at St Andrews for several years.”

The spokesman went on to say that apart from the training on good academic practice, “all of these modules were introduced at St Andrews in response to clearly expressed student demand”, claiming that students had “pushed for the mandatory consent module, wrote the sustainability module, and were central members of the EDI (equality, diversity and inclusion) group which brought in the mandatory diversity module”.

“The modules were developed to align with St Andrews’ strategic priorities (diversity, inclusion, social responsibility, good academic practice, and zero tolerance for GBV [gender-based violence]) and help develop skills and awareness valuable to life at university, and beyond.

“In our experience, students recognise the value of these courses, and we have encountered only one complainer in the past five years,” the university said.

One student speaking to The Times, however, suggested that there were so few complaints because the courses put freshers — mostly 18-year-olds — in a difficult position and that they did not want to complain or potentially alienate themselves.

“It seems like they [the university] are pushing an agenda and it appears performative and contrary to academic freedom and freedom of thought,” the female student, who wished to not be named, told The Times.

The Free Speech Union called the requirement “appalling”, saying that they would be writing to the principal of St Andrews, demanding the tests “be withdrawn at once”, before reaching out to students offering support and advice.

“Freedom of speech is dying on our campuses,” warned campaign group Don’t Divide Us, which opposes identity politics and critical race theory.

The report comes after the University of Kent was accused by one of its own academics of imposing “woke dogma” when a similar compulsory diversity course told students that wearing used clothes without it being attributed to race, poverty, or “bad morals” was an example of white privilege.

According to the quiz seen by The Telegraph and reported earlier this week, the Expect Respect course includes a section on ‘white privilege’, and that too many wrong answers result in the student having to take the course again.

St Andrews University students have been told they must pass diversity and consent modules.

Spiked Online's Brendan O’Neill: "Universities have become factories of wokeness. They take students in and spit them out as nodding dogs of political correctness"@Iromg | @spikedonline pic.twitter.com/aQmGb92Ueh

“I can swear, or dress in second-hand clothes, without having people attribute these choices to the bad morals, the poverty or the illiteracy of my race,” said one question asked of Kent students. Staff were also reportedly told to add trigger warnings to exam materials, ‘decolonise’ reading lists, and carry out “pronoun checks” on their new students.

Kent professors such as Ellie Lee and Frank Furedi spoke out against the tests and woke orders from their university authorities, with sociologist Professor Furedi saying: “There’s a danger of promoting conformism on campuses under the guise of education that you indoctrinate people into woke dogma.”

The Times also quoted Professor Furedi on Friday as saying that university induction training is a “very powerful and pervasive force”, adding: “If you don’t sign up to it you’re marginalised. It’s a corrosive form of indoctrination.”

Former universities minister Chris Skidmore called such induction programmes — with similar courses noted by The Times at other universities including Bath and Southampton — an “abuse of authority when students should be receiving support for their transition from school, not moralising”.