Last week, Neil Angus MP was amongst a handful of MPs that voted against mandating that all State MPs produce evidence they are vaccinated (or have an exemption), or otherwise be effectively banned from Parliament.
.
In his speech opposing the motion, Neil Angus MP argued in defence of protecting the rights and freedoms of all Victorians against mandates that impact their ability to work and participate freely in society.
.
Whose lungs are they anyway?
Jeffrey A Singer Quadrant Online 20th October 2021
.
As of October 1, 2021, Australians can only purchase nicotine-containing e-cigarettes if they have a prescription from a licensed health care practitioner. Ironically, combustible tobacco cigarettes that contain carcinogens and other toxins in addition to nicotine will not require prescriptions. 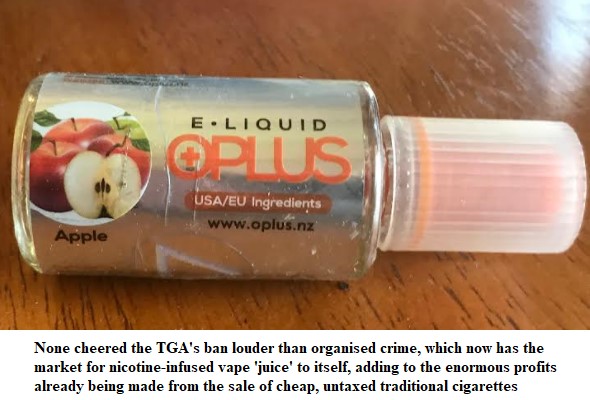 .
As of October 1, 2021, Australians can only purchase nicotine-containing e-cigarettes if they have a prescription from a licensed health care practitioner. Ironically, combustible tobacco cigarettes that contain carcinogens and other toxins in addition to nicotine will not require prescriptions. If nicotine is so dangerous, then perhaps prescriptions should be required for tobacco products, and for tea and coffee, which contain caffeine—a substance very similar to nicotine and, according to some, equally harmful, which is to say not very harmful at all.
.
But give credit where it is due. By legalising ‘medicinal’ nicotine vaping, at least Australia’s Therapeutic Goods Administration (TGA) recognises the harm reduction potential of nicotine-containing vaping products. In the United States, the Food &Drug Administration (FDA) appears oblivious to the benefits of e-cigarettes as it heads towards an outright ban.
Nicotine-containing vaping products have a proven record of helping tobacco smokers kick the habit. In the United Kingdom, Public Health England (PHE) tells primary care practitioners to suggest e-cigarettes to their tobacco-smoking patients as a cessation aid. PHE claims vaping is 95 per cent less harmful than smoking tobacco. Britain’s Royal College of Physicians advocates e-cigarettes for nicotine replacement therapy (NRT), stating:
.
In the interests of public health it is important to promote the use of e-cigarettes, NRT and other non-tobacco nicotine products as widely as possible as a substitute for smoking in the UK.
.
Randomised controlled trials in the US have also demonstrated that e-cigarettes are “significantly more effective” than other forms of NRT.
.
Some states and municipalities in the US have already banned flavoured vaping products in an effort to reduce teen vaping. Yet studies show flavoured e‐cigarettes, while popular with teens, are preferred by adults trying to quit tobacco and are not associated with an increase in youth tobacco initiation. And a recent study in the Journal of the American Medical Association found that San Francisco’s ban on flavoured vaping products may have unintentionally increased teen tobacco smoking.
.
While the US seems hell-bent on driving people who vape back to smoking tobacco, at least Australia’s policymakers, like those in the UK, recognize that nicotine vaping helps people quit tobacco. Nevertheless, Australia’s policymakers, like those in the US, are more paternalistic and less respectful of adult autonomy than their British counterparts. For example, why require prescriptions for nicotine-containing products other than smoking tobacco? And why are they needed when not required for products that contain the more favourably viewed caffeine?
.
Nicotine, like caffeine, is a stimulant that improves focus. Unlike caffeine, nicotine increases production of beta-endorphins that relieve anxiety, which may explain why some tobacco smokers light up when they want to calm down. Nicotine can be quite addictive, but regular caffeine consumption can lead to “Caffeine Use Disorder”. Aside from nicotine’s addictive potential, the drug is relatively harmless. It can raise the blood pressure in some people, but so can caffeine. Both can be toxic if consumed at high dosages. The nicotine in tobacco smoke addicts people to smoking, but the harmful effects of tobacco smoking are from the carcinogens and other toxins in tobacco tar. Furthermore, nicotine might reduce the incidence of Parkinson’s Disease and has stimulated research into its potential therapeutic applications for this affliction. It also may be potentially useful to treat depression, Tourette’s Syndrome, Alzheimer’s’ Disease, and schizophrenia.
.
If the addictive potential of nicotine is the problem, there are other substances that are potentially addictive and legal yet don’t require the authorities’ permission (prescriptions) to purchase or consume. Alcohol, which can harm multiple organ systems, is available in shops, pubs and restaurants without a prescription. Cannabis, the heavy use of which can lead to Cannabis Use Disorder, is available without a prescription in the Australian Capital Territory (ACT). Likewise in 19 states in the US plus the District of Columbia and Guam. Canada legalised ‘recreational’ cannabis in 2018, and Uruguay did so in 2001. Alcohol and cannabis can cloud the faculties and make operating vehicles and heavy equipment more dangerous. On the other hand, nicotine might enhance alertness.
.
It makes no sense to require medical permission slips for consenting adults to ingest nicotine via e-cigarettes when doing so through combustible tobacco requires no such official nod. It makes even less sense when substances of equal or greater addictive potential are legally available without a prescription. Perhaps this is due to an irrational, zero‐tolerance stance toward any activity, such as vaping, that resembles tobacco smoking.
.
Australia should adopt Britain’s approach and let adults consume adult products, including nicotine-containing e-cigarettes, without crowding doctor’s surgeries in search of permission slips. It should encourage tobacco smokers to consider switching to vaping. And it should avoid the road down which the US is rapidly and ominously traveling.
.
Dr Jeffrey A Singer MD practices general surgery in Phoenix, Arizona, and is a senior fellow at the Cato Institute