“Rare cases” are not rare at all. ‘Rare cases’ are rather common:

Mike Granata, initially did not want to get the experimental mRNA injection. He was terrified that he would die. But, at the insistence of his doctor, he finally was jabbed.

On August 17, Mike received the Moderna vaccine, and three days later, he became ill. He developed multisystem inflammation syndrome and multisystem failure. Sadly, after ten weeks of suffering unbearable pain, medical professionals were unable to save him.

In the iron grip of the Pharma mafia:

Finally, one newspaper posts an online story about the Pfizer “data integrity” scandal. One paper. Online. When people realise the power of Big Pharma lobbying, this will prove to be a huge scandal. 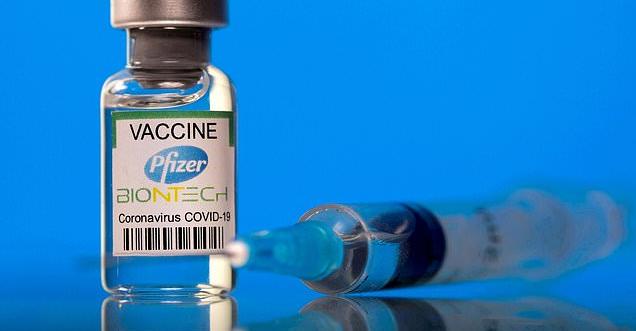 Researchers running a small number of Pfizer‘s original Covid vaccine trials may have skewed their findings, an investigation has warned.

A US subcontractor paid to run an arm of the study has been accused of cutting corners, obscuring data and putting patients in harm’s way.

Brook Jackson, a former boss at Ventavia, said the firm did not always test patients with symptoms, which potentially masked how well the jab performed.

Australian Chief Medical Officer Warns the Unvaccinated: ‘Your Life Will Be Miserable’

Safe and effective? Are these the vaccines that you want to have mandated for injection into your children, California parents?
Let's go Gavin! pic.twitter.com/LYrN0K8I34

She told a British Medical Journal probe that as well as ‘falsifying’ data, Ventavia hired underqualified staff as vaccinators and failed to follow-up on side effects.

The whistleblower has provided ‘dozens’ of internal company documents, photos, audio recordings and emails to back up her claims.

Two other former Ventavia employees, who wished to remain anonymous, have both ‘confirmed broad aspects of Jackson’s complaint’, the BMJ said.

The Texas-based contractor was responsible for 1,000 participants at three sites in the state, or just 2 per cent of all participants in Pfizer’s phase three trials.

But there are concerns that similar problems may have crept into other arms of the trial, given the pressure researchers were under to produce results.

Pfizer has since rehired Ventavia to work on four other trials of its jab, including for children and young adults, pregnant women, and as booster doses.

Billions of Pfizer doses have been administered worldwide and serious adverse reactions have proven to be extremely rare.

Australia’s medicines regulator became the first to announce it has sought additional information from Pfizer on the back of the investigation.

But it stressed the vaccine is ‘highly safe and effective’, highlighting that the incident was likely to be isolated.

MailOnline has contacted Britain’s drug watchdog — the Medicines and Healthcare products Regulatory Agency — to ask if it is also probing the claims.

Ms Jackson – a trained clinical trial auditor with 15 years’ experience – was employed by Ventavia to oversee its trials at the start of September.

But she was ‘exasperated’ at problems she witnessed on the sites and documented the malpractices on her mobile phone and computer, the BMJ said.

One photo, provided to the journal, showed needles discarded in a plastic biohazard bag instead of a sharps container box, breaching infection control rules.

Another showed vaccine packaging materials with participants’ IDs left out in the open, revealing who had and hadn’t been given the real vaccine.

Rules designed to avoid bias mean researchers should be ‘blinded’ during the trial, and not know which patients have been given a placebo. Unblinding may have occurred on a far wider scale, the BMJ warned.

Ms Jackson said that Ventavia was also not keeping track of the numbers of errors that occurred during the trial.

In one secret recording, an executive at the firm could be heard saying: ‘In my mind, it’s something new every day. We know that it’s significant.’

The BMJ said the problems persisted before Ms Jackson was employed at the firm in September. In one email, an executive highlighted three members who they wanted to ‘go over e-diary issue/falsifying data, etc’ with.

One of them was ‘verbally counseled for changing data and not noting late entry,’ a note indicates.

Other documents show more than 100 patients were not followed up for three or more days after their jab, despite guidelines stating this should be done within 24 hours.

Two of the participants had reported severe symptoms or side effects after vaccination.

According to the trial protocol, a phone call should have been made ‘to ascertain further details and determine whether a site visit is clinically indicated.’

In total, Ms Jackson listed a dozen concerns she had witnessed, including vaccines not being stored at proper temperatures and samples being mislabelled.

In several cases Ventavia lacked enough employees to swab all trial participants who reported Covid-like symptoms, to test for infection.

It’s unclear how many patients went untested but an FDA review into Pfizer’s full trial of 44,000 people found that swabs were not taken from 477 people with suspected Covid.

Ms Jackson claims she notified Ventavia repeatedly about the issues during her two-week spell at the firm and eventually lodged a complaint with the FDA on September 25.

Ventavia said the accusations were investigated and ‘determined to be unsubstantiated’ last year.

Ms Jackson was sacked on the same day, with her employer claiming in her dismissal letter that she was ‘not a good fit’.

Another former employee told the BMJ that Ventavia had been nervous and expected a federal audit of its vaccine trial, but one never came.

Speaking about the results from the Ventavia arm of Pfizer’s trial, they said: ‘I don’t think it was good clean data… It’s a crazy mess.’

After its full approval of the vaccine in August this year, the FDA published a summary of its inspections from the phase-three trials.

Nine of the 153 trial sites were inspected, and Ventavia’s sites were not listed among the nine.

A Ventavia spokeswoman told MailOnline: ‘Ventavia is aware of recent accusations in an article written by Paul Thacker [of the BMJ].

‘Mr Thacker did not contact Ventavia prior to publication. The accuser was employed for approximately two weeks in September 2020, and no part of her job responsibilities concerned the clinical trials at issue.

‘These same accusations were made a year ago, at which time Ventavia notified the appropriate parties.

‘The allegations were investigated and determined to be unsubstantiated. Ventavia takes research compliance, data integrity, and participant safety very seriously, and we stand behind our work supporting the development of life-saving vaccines.’

They must be stopped:

Pfizer’s Covid jab IS safe for children and should be ‘urgently’ rolled out to youngsters, claims study funded by drug giant

Two doses of Pfizer‘s Covid vaccine is safe, effective and produces a strong immune response in five to 11-year-olds, according to trial data.

Researchers from the drug giant, working in tandem with academics at several top universities, calculated the jabs were 90.7 per cent effective at preventing infection.

Publishing the results in the prestigious New England Journal of Medicine, scientists said policies to vaccinate under-12s were ‘urgently needed’.

The US and a handful of other nations have already pressed ahead with the rollout to under-12s but the UK has yet to follow suit, despite mounting pressure from certain corners of the medical community.

Experts today warned the trial, of just 2,000 children, was too small to spot serious adverse reactions to the jab.

Dr James Doidge, a statistician based at the Intensive Care National Audit & Research Centre, called for clearer data on the precise risks and benefits on giving youngsters the jabs.

Fears over a very rare heart condition side effect — called myocarditis — led British health chiefs to opt against routinely jabbing healthy 12 to 15-year-olds, who face a tiny risk of getting seriously ill.

Eventually No10 went ahead with the move after modelling showed it would prevent tens of thousands of school absences.

But only one dose if offered to the cohort currently because myocarditis was most common after the second jab.