Woke journalism must be agenda driven. Race huckstering has to be an essential ingredient. 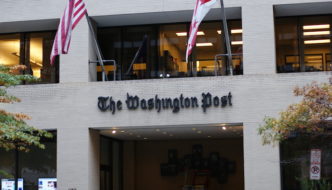 It’s hard to believe that all this is happening in the United States. First, secret police chief Merrick Garland directed the FBI to monitor parents who protested at school board meetings against the imposition of Critical Race Theory (CRT) in schools. Then there was the Justice Department’s raid of the home of Project Veritas founder James O’Keefe because of Ashley Biden’s diary. After that came the arrest of harsh Biden critic Steve Bannon for contempt of Congress, the first such arrest in decades, for his refusal to cooperate with the Democrats’ Jan. 6 pseudo-insurrection show trials.

Then today came news of FBI raids of the homes of Colorado’s Elections Clerk and Rep. Lauren Boebert’s (R-Colo.) campaign manager. It looks as if the Justice Department has become an authoritarian tool of Biden’s handlers in their quest to criminalize dissent from their agenda — and this corruption is advancing so rapidly that even the Washington Post, a reliable mouthpiece of the Deep State, is now wondering if it is all going too far.