On Sunday morning in Britain, just as the nation was preparing to observe a moment of silence for Remembrance Day, a taxicab pulled up in front of Liverpool Women’s Hospital and exploded into flames. Moments later, the cab driver, David Perry, who had run out of the car, explained that he had noticed that his passenger, who turned out to be an Iraqi migrant named Emad Jamil Al Swealmeen, was wearing an explosive belt, so he locked the cab, whereupon Swealmeen exploded his bomb inside it. 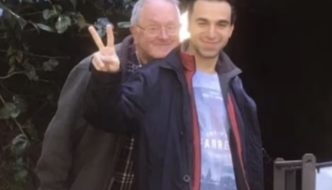 This would be an unfortunately standard story of jihad terrorism were it not for a strange detail. Swealmeen converted to Christianity in 2017, in the same cathedral he had apparently planned to attack: he initially asked Perry to drive him to the Anglican cathedral in Liverpool, but traffic was heavy, and so he opted to go to Liverpool Women’s Hospital instead.

Did A Christian Just Blow Himself Up for Jesus?

It is clear that Swealmeen, like so many other “asylum seekers,” thoroughly fooled British authorities. That was easy, as they were are are very, very eager to be fooled.

UK: Liverpool ‘Christian’ jihad suicide bomber was at mosque ‘all day every day’ in weeks leading up to attack

“Poppy Day suicide bomber was at a mosque ‘all day, every day’ during Ramadan and in weeks leading up to botched bomb plot despite converting to Christianity in 2017 and used fake identity to claim asylum,” by Martin Robinson, MailOnline, November 18, 2021

The Liverpool suicide attacker who officials suspect converted to Christianity to aid his asylum application was in his mosque ‘all day, every day’ at the time he began building his bomb, it emerged today.

Emad Al Swealmeen, who was baptised and confirmed at the city’s Anglican cathedral in 2017, was seen worshipping with Muslims during Ramadan and praying with a friend in the week before Sunday’s attack, it is alleged in media reports.

The revelation will further fuel suspicion that his conversion to Christianity four years ago was just an act to persuade the Home Office to grant him British citizenship and prevent them deporting him because of his new-found faith.

Immigration sources said today that Al Swealmeen used a false identity and multiple appeals to ‘frustrate’ attempts to remove him from the UK before he tried to kill women and babies on Remembrance Sunday.