The language used by these muppets is cringeworthy pic.twitter.com/zcYpSrz83f

When are Australian politicians going to apologize for using lines like, “a pandemic of the unvaccinated”?

.
#Gibraltar #Israel #Iceland etc all prove that this is FALSE.
It was a LIE used to publicly demonize citizens in the eyes of their kin. #COVID19 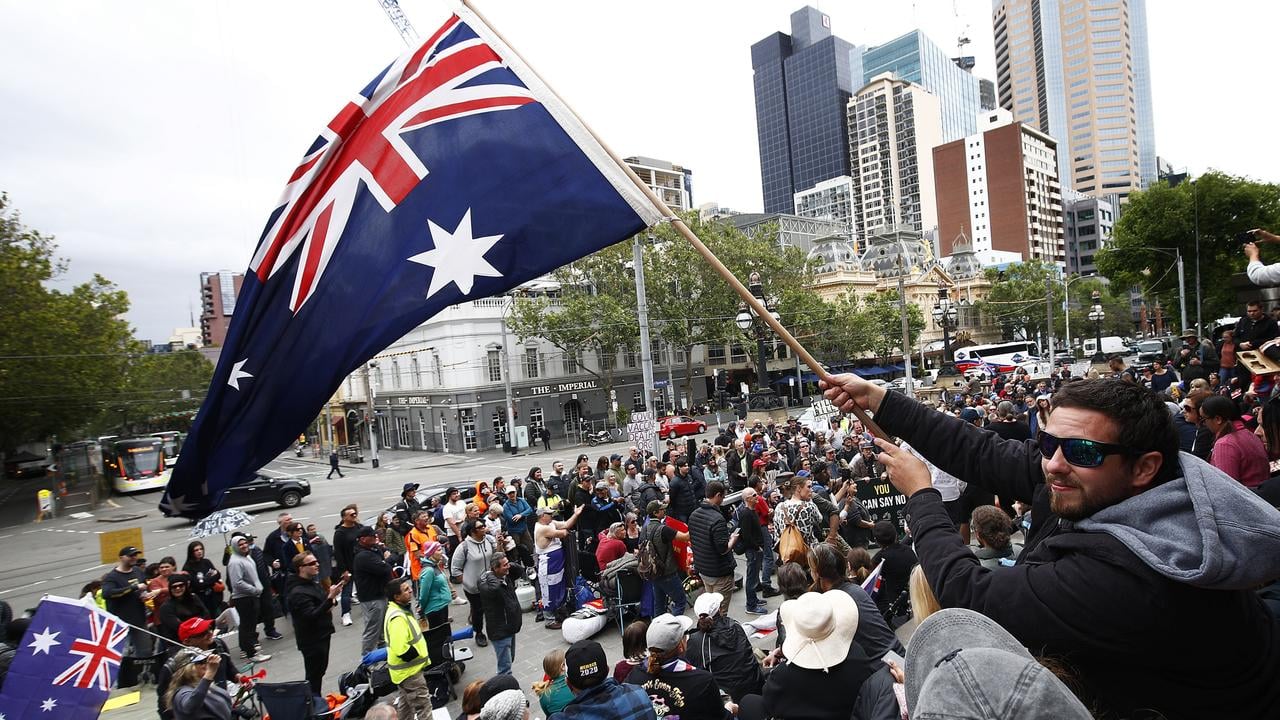 .
Time and time again the Left prove that if they didn’t have double standards they’d have no standards at all. For the past week we’ve seen the most incredible hypocrisy with peaceful protesters slandered as violent extremists because some bloke brought a silly prop to Saturday’s mass march against the Dan Andrews government’s pandemic Bill.
.
Since then a couple more nincompoops have engaged in idiotic behaviour, including a man who was issued a warning by police after towing a makeshift gallows behind his car.
.
Of course anyone engaging in violence or issuing threats should have the full force of the law come down upon their heads, but to malign concerned Victorians marching peacefully against draconian restrictions and a radical pandemic Bill is disingenuous at best.
.
The relentless and often demented emoting about a makeshift gallows seen during Saturday’s march has been nothing short of self-serving hyperbole.
There were no similar concerns or calls for politicians to disavow when far-left activists burnt effigies of Liberal politicians or when participants create chaos in the name of climate change, the women’s movement or race relations.
I don’t recall ABC blowhards or Labor backbenchers demanding that every MP denounce and distance themselves from global warming activists who routinely engage in property damage or some of the violent messaging and imagery we saw earlier this year during the March for Justice rallies around the country.
.
Indeed, during the protests sparked by the treatment of women in Parliament House there was imagery of five nooses with each one containing severed male genitalia. That didn’t see the media or politicians suggest that the protesters wanted to literally castrate men and perform mass penectomies.
.
Those taking part in the highly partisan March for Justice rallies were presented as heroines whose worldview was shared by every Australian women, they weren’t maligned en masse over a few ill-advised props.
.
But those marching on Saturday have not been so lucky with many in the media gladly pushing a narrative developed by Labor and its trio of useful “independent” idiots; a narrative that paints ordinary people as unhinged conspiracy theorists. Greens leader Adam Bandt posted: “The demonstrations on the streets of Melbourne are a terrifying escalation of a fringe group that is growing increasingly detached from reality.”
.
This from a man who has engaged in the most reprehensibly reckless rhetoric that could be considered incitement, including calling federal minister Peter Dutton a “terrorist”. Bandt has in the past spoken at a rally where a life-size effigy of then federal minister Christopher Pyne was burned.
.
After months of watching self-serving politicians and a lazy, complicit media malign anti-lockdown and then anti-pandemic Bill protesters, I decided to grab a cameraman and head to Saturday’s mass protest to see for myself who was marching, why and what their real numbers were.
.
Firstly, the crowd number was far bigger than reported. You only had to look at aerial shots of Spring St and then down Bourke St to see the scale of the protest. Collins St was also choc-full of protesters from Spring St down past Elizabeth St. To have tens of thousands, possibly well over 50,000 Victorians, march in the cold and driving rain against the Andrews government’s pandemic Bill shows the depth of feeling in the state.
.
To march knowing politicians and the media would viciously misrepresent them and their motives takes courage. The mass protest on Saturday was peaceful and according to Victoria Police: “Despite significant numbers in attendance, the protest was peaceful with no arrests made.”
.
But, true to form, the media focused on a couple of dolts with props and underreported the numbers. It’s no wonder that in the eyes of the protesters, the fourth estate is considered almost as objectionable as the state government.
Every single protester I spoke to, and I spoke to many dozens, mentioned at least two of the following; the pandemic Bill, the lockdowns, the mental health impact, vaccine passports and the media misrepresentation.
.
These are just a few of the comments from protesters we played on Sky News this week:
.
“We believe in free choice, not coercion, that’s why we’re here.”
“We plead with the government, all our upper house MP’s, please vote against it. You were put there by the people for the people.”
.
“They’ve made us out to be villains, and made us out to be criminals, when all we are wanting to do is protest peacefully.”
.
Most of those I spoke to were double vaccinated but against the mandatory vaccine requirements. Again, that is nuance most reporting has missed.
.
What was most noticeable was how diverse the group was; from grandparents to Millennials, different races and socio-economic groups but united in their opposition to the Andrews government. In a few short hours I had spoken to first generation migrants of all colours from Romania, Germany, South Africa, Venezuela and Canada. Hardly the white supremacist posse some would have you believe.
.
There’ll be another protest this Saturday in Spring St and hopefully the far-left agitators who have vowed to show up with a counter protest stay well away and we do not see the day descend into violence. Protesting peacefully is a fundamental right but nobody has the right to issue threats or engage in violence.
.
1/ Protesters on the steps of parliament earlier this week. Picture: Getty Images
2/ Students tear apart an effigy of Christopher Pyne in 2014. Picture: AAP Image
3/ The media has incorrectly reported the number of protesters at rallies in recent weeks. Picture: Tim Carrafa