This MF is certifiably insane. 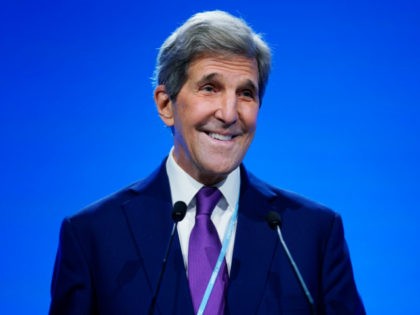 U.S. Climate Envoy John Kerry: “We’re already seeing climate refugees around the world. If you think migration has been a problem in Europe in the Syrian war … wait until you see 100 million people for whom the entire food production capacity has collapsed.”

Kerry told the meeting on “Climate Finance for Sustaining Peace and Security” U.S. taxpayer dollars will be forthcoming and placed at the disposal of the globalist body to help redistribute wealth in a time of crisis to poorer countries that need it most.

AP reports last September, he said, Biden promised to increase annual U.S. climate finance to over $11 billion, quadrupling the funding from the 2009-2017 presidency of Barack Obama, when Biden was vice president.

John Kerry said the “biggest thing” he’s doing in his “lifestyle” to combat climate change “is traveling around the world, trying to do diplomacy” on climate. https://t.co/YJvPAe2q5S

Kerry, a long-time friend and Senate colleague of Biden, said as part of increased U.S. efforts at last November’s U.N. climate summit in Glasgow, Biden announced “an emergency plan for adaptation and resilience.” It “is going to help more than 500 million people in developing countries to be able to manage the impacts of the climate crisis by 2030,” he said.

The AP report outlined he said the administration is working with the U.S. Congress to produce $3 billion annually for the program and to increase adaptation efforts for 2024. “It’s the largest kind of commitment like this that the United States has ever made in our history,” he said.

John Kerry has taken a beating on social media for hoping that Putin would “stay on track” in the fight against climate change after invading Ukraine. https://t.co/YRRGgyULMg

But Kerry said to totally fund the economic transition that all countries must make to tackle climate change, “it’s going to require not just $100 billion but trillions of dollars.”

“No single government — no group of governments — can meet the $2.5 trillion to $4.6 trillion deficit that we face in order to affect this transition,” he said.