In case you didn’t know it yet: the UN is a criminal organisation trying to usurp all powers openly & by stealth imagining itself as a dictatorial world government. 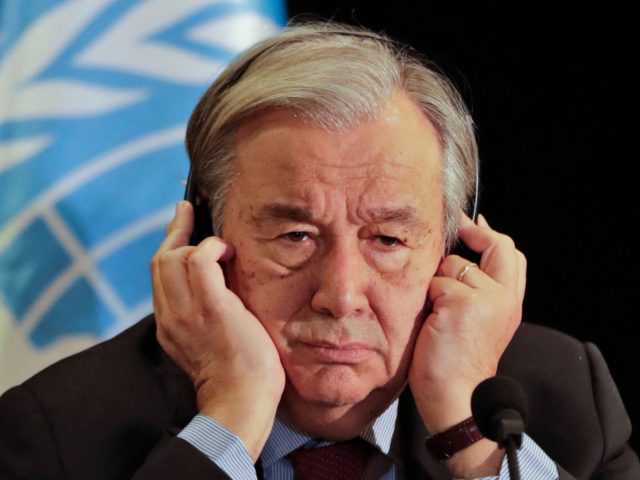 The pain of soaring gas prices must be endured because any wider embrace of fossil fuels as an alternative is “madness” and threatens global climate targets, U.N. Secretary-General Antonio Guterres cautioned Monday.

If countries “become so consumed by the immediate fossil fuel supply gap that they neglect or knee-cap policies to cut fossil fuel use” a climate disaster is the guaranteed outcome, Guterres said in a pre-recorded address to the Economist Sustainability Summit.

The invasion of Ukraine has seen rapid rises in the prices of coal, oil and gas as countries scramble to replace Russian sources but Guterres fears these short-term measures might “close the window” on the Paris climate goals.

The BBC reports the veteran Portuguese Socialist also called on countries to fully phase out “stupid” coal by 2040 and endure the financial costs without complaint.

The Reef, the reef! It’s always the reef!

Agenda 21: Australia falls hook line sinker for the treaty of the sea fraud.

This is about global governance by the corruptocrats of the UN:

Why not turn Australia into a zoo? Then we could build a bridge to Indonesia so the “Muslim world” could come and look at us one more time before we are being eliminated.

Just to give you an idea where the money goes from the ‘carbon tax’ we had to have:

The U.N. is funneling millions of dollars worth of tradable carbon credits to corrupt nations worldwide, including Iran, North Korea, Sudan, and Uzbekistan in an attempt to encourage clean energy projects in the developing world.

The ABC has obtained an Environment Department proposal for a network of marine parks that would make up the biggest ocean conservation sanctuary in the world.

Environment Minister Tony Burke’s upcoming announcement of a national network of Commonwealth marine parks has been described by environmentalists as a chance for the government to leave a legacy as significant as the protection of the Great Barrier Reef or Kakadu.

The documents show a huge protected area in the Coral Sea off Queensland, stretching all the way along the state’s coastline and a long way out to sea.(Continued, click here for videos and maps,)

The U.N. wants control of the oceans?

Agenda 21: Alabama may have outfoxed it. Why you should care.

“Agenda 21″ sounds like a daft-but-harmless-idea you can ignore. I found it hard to get enthused, but I was wrong, and no one sums this up better than James Delingpole in “Watermelons” (aka “Killing the Earth to Save it). To paraphrase James’s brilliant work (forgive me James) from page 190:

Some of you still aren’t convinced that you need to worry about Agenda 21 because you are thinking:

a) Agenda 21 sounds way too much like Area 51, (you know Aliens and the Roswell incident). Nut job stuff.

c) What sovereign nation would be so insane as to sign itself up for a binding treaty?

James explains that it’s real, it’s important (like an anti-magna-carta), and its’ a wolf in sheep’s clothing. Governments could sign up because it was “voluntary”, but then those voluntary rules are scrupulously and doggedly enforced by the “labyrinthine, democratically unaccountable behemoth that is the United Nations.”

Furthermore, he points out that it’s not like they’ve bothered to hide their aims  they want to control your resources, your money, your actions and every decision you want to make:

“Effective execution of Agenda 21 will require a profound reorientation of all human society, unlike anything the world has ever experienced a major shift in the priorities of both governments and individuals and an unprecedented redeployment of human and financial resources. This shift will demand that a concern for the environmental consequences of every human action be integrated into individual and collective decision-making at every level.”

Agenda 21 is very much about property rights (ie. their right to your property).Justice Gilpin-Green quotes Agenda 21:

“Land…cannot be treated as an ordinary asset, controlled by individuals and subject to the pressures and inefficiencies of the market,” Agenda 21 says. “Private land ownership is also a principal instrument of accumulation and concentration of wealth and therefore contributes to social injustice; if unchecked, it may become a major obstacle in the planning and implementation of development schemes. The provision of decent dwellings and healthy conditions for the people can only be achieved if land is used in the interest of the society as a whole.”**

Agenda 21 is so non-threatening, voluntary, and out of date, that Alabama has just written legislation specifically designed to stop it. The legislation has passed.  It protects property rights against anything linked to Agenda 21, and also stops the state sending or receiving money to Agenda 21 NGO’s or GONGO’s.

Who knew that Alabama needed legislation to stop private property from being confiscated without due process?

(Who knew there are Democrats against Agenda 21?)

Agenda 21 also appears in other forms like, ICLEI, or the International Council for Local Environmental Initiatives. Gilpin-Green says “When countries like the United States fail to adopt the environmentalist agenda promoted by the United Nations, that organization manages to bypass them by providing various incentives to state, county, and municipal organizations.” Apparently some towns get funding from the UN and display their cheques proudly. How does that work? taxpayers pay money to a government, which gives it to a foreign unelected body, which then pays their local council in order to gain influence? So much for your votes. When the chain of voting-to-power becomes so long and distant,  it’s a case of your money, used against you.

Â Government Marine Park (The Law of the Sea)