Protests against the results of the first round elections in France.
Apparently the majority did not vote for Macron🧐 pic.twitter.com/xTEIqbEJEx 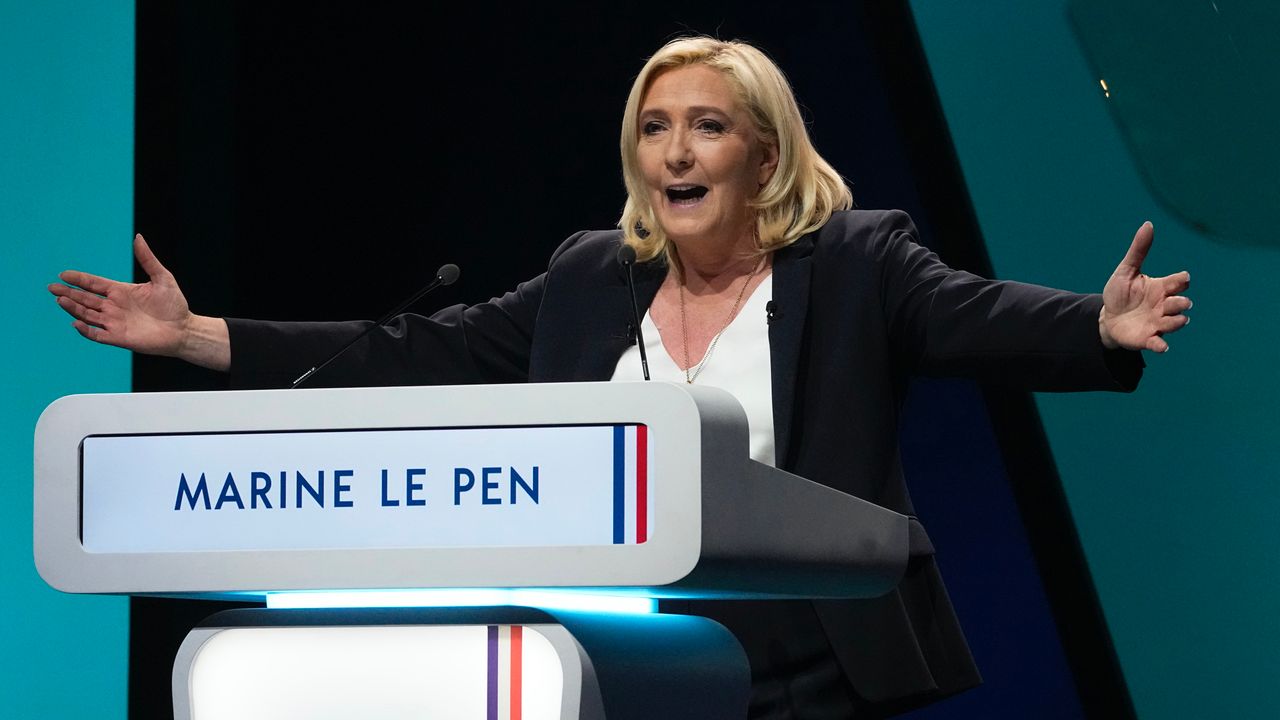 On April 13, the National Rally’s Marine Le Pen laid out an aggressive foreign policy at a public meeting in Paris. The neo-fascist candidate for the French presidency called to end cooperation with Germany and to refuse visas for Algerians, while threatening Muslims in France with violent police repression.

Resistance to globalism & Islamisation? Wouldn’t that be nice?

The future is Marine Le Pen

A Macron victory won’t hold back the tide of populism

Whatever happens in the second round of the French election, Marine Le Pen will be able to claim victory. If the polls are correct, as they were in round one, she will receive around 46% of the vote. But while Le Pen will fail to win the presidency, she will be able to saviour another prize: the knowledge that she has forever broken the mould of French politics.

Combine Le Pen’s vote with Eric Zemmour’s and Nicolas Dupont-Aignan’s and the picture is far more dramatic. Together, they polled more than 32% — ten points more than what Le Pen won five years ago and nearly double what she received a decade ago. Remarkably, they received a higher share of the vote than all of France’s Left-wing parties combined. In the next round, Le Pen is forecast to surpass the 33% she won in 2017 by 13 points — more than double the 17% her father, Jean-Marie Le Pen, polled in the final round 20 years ago. Such is Le Pen’s progress that were she to replicate her father’s vote, which stunned the world, then it would be seen as a colossal failure.

Nor is she anywhere near as toxic as he once was. According to one Ifop survey last week, almost half the French, 46%, said they trusted Le Pen to defend democratic values (versus 50% for Macron). Many people simply no longer view her in the way an earlier generation saw her father. She is transitioning from the margins to the mainstream.

None of this was supposed to happen. One very fashionable narrative during the pandemic was that Covid-19 would kill off populism as people flocked back to the old parties, the technocrats, and the experts. Take a report by the Bennett Institute for Public Policy at the University of Cambridge, which concluded that support for populism had “collapsed” since the Covid outbreak, due to a “technocratic shift” in global politics. “Electoral support for populist parties,” wrote the lead author, Dr Roberto Foa, “has collapsed around the world in a way we don’t see for more mainstream politicians. There is strong evidence that the pandemic has severely blunted the rise of populism.”

The resurrection of Marine Le Pen

But the elections in France, and elsewhere, point in the opposite direction. Two-thirds of the French just voted for anti-establishment candidates outside of the incumbent president and the two mainstream Gaullist and socialist traditions which have dominated post-war France. Combined, support for the French Gaullists and the socialists collapsed from 54% in the late Eighties to just 6% today. Over the last half century, the French socialists — once the pre-eminent Left-wing party in Europe — have fallen from over 40% to just 1.7%. They are, in short, almost extinct. It is Marine Le Pen, not the Socialists, who can claim with a straight face to be the main working-class party in French politics.

Nor, for that matter, do many other populists appear to be struggling. As Roger Eatwell and I argued in our book, National Populism, they have become a permanent feature on the political landscape. In Germany last year, for instance, the Alternative for Germany’s share of the national vote fell by just 2 points to 10%, leaving it with 83 seats in the Bundestag (something that would have been considered unthinkable only a decade ago). In the Netherlands, while support for Geert Wilders fell slightly, support for Thierry Baudet’s Forum for Democracy increased, putting them both on 16% — an increase on their result four years earlier.

In Norway, the Progress Party has fallen nearly four points to 12% but further south, in Portugal, the new Chega! (Enough!) Movement just entered parliament for the first time with 7% of the vote and their first twelve seats. In the Czech Republic, Andrej Babiš recently lost 2 points but still polled 27% while, last month, in Spain’s Castile and León region, the Vox movement won its best ever result with 17.6%. Then, last month in Hungary, Viktor Orbán’s Fidesz were comfortably re-elected with over 54% of the national vote.

Further afield, too, 2022 looks set to reaffirm the existence of national populism, not push it into retreat. In November, at the US midterms, Trumpian Republicanism looks set to have a strong return. Joe Biden’s approval rating, long a solid predictor of midterm results, is now just 42%. This is lower than the approval rating for every other president at the same point in the cycle, with only one exception: Donald Trump. Today, nearly two-thirds of all voters say America is “on the wrong track” while the first polls for the 2024 presidential election put Trump four-points clear of Biden.

Of course, there are examples of populists falling off the rails, such as Bolsonaro in Brazil, who is routinely trailing the Left in the polls. But when seen as a whole, and especially in Europe, the idea of populism being on the ropes is wishful thinking. If anything, the revolts of 2016 look more like the appetiser than the main course.

The notion that Covid would kill off populism isn’t the only narrative Le Pen has overturned. Contrary to the idea, fashionable among liberal progressives, that populist voters would die out, Le Pen’s vote tells the story of a new populist wave in Europe. In the first round of the presidential election, she polled ahead of Macron among everybody under 60 years old. The only people who flocked to Macron’s liberal centrism, like the ageing commentators who flock to liberal centrism on Twitter, were the over-60s.

Look at the polls for the second round, too, and much of Le Pen’s support comes not from nostalgic pensioners who yearn to return to the Fifties but younger voters, especially young women. Typically aged 18-34 years old, they work in skilled, semi-skilled, or unskilled jobs in the new working class — in sales and services — where they have found themselves on the wrong side of globalisation, automation, immigration, and a new cost of living crisis.

Nor is this the only shift. Ever since the Nineties, the Le Pen dynasty has been most popular among blue-collar male workers. But more recently it has appealed far more to socially secure workers on lower-middle incomes who are squeezed between liberal professionals and the unemployed. They are the voters, in other words, who are especially likely to feel they have something to lose, whether from downward social mobility, rising immigration, neglectful elites, or rampant globalisation, much like the skilled and semi-skilled workers who abandoned the Labour Party for Boris Johnson.

Ask Le Pen’s voters to name their top concerns and they are certainly more likely than the average voter to flag their intense worries over immigration, security, and, further down the list, the need to control Islamist terrorism. But their top concern, by far, has little to do with cultural issues: it is their declining “purchasing power”. They are not only united by the sense they are losing out socially, being pushed further down the social ladder behind the new graduate elite, immigrants and minorities — they cannot even afford to tread water and stay where they are.

Amid spiralling inflation and energy costs, Le Pen is appealing to French people who were born between 1988 and 2004, who have no memory of her father’s toxic campaigns, who have grown up in a world where populism is entirely normal, not an aberration, whose young lives were defined first by the global financial crisis and then by the Covid lockdowns, and who have never known a thriving, secure, growing French economy with low rates of unemployment. Why would they trust the old politics?

MORE FROM THIS AUTHOR

What’s the point of Boris Johnson?

Many have spent their adolescence amid high youth unemployment rates of at least 20%, low rates of economic growth and, on top of that, some of the worst Islamist atrocities in Europe. Le Pen has deliberately tried to woo these voters in a way her father never could. Look at her policies and you will find the expected call for a national referendum on “uncontrolled immigration”, a pledge to eradicate Islamist ideology and its networks from French territory, and a promise to toughen up sentences for criminals.

But you will also find calls to slash VAT, raise wages, renationalise motorways, and a range of measures for these young people — monthly training vouchers for apprentices, the removal of all workers under 30 years old from income tax, the removal of corporation tax for entrepreneurs under 30, the building of 100,000 new accommodation units for students, and 0% loans for young families to try and stop them moving abroad.

This effort to connect with a new generation of French voters is clearly working. Already, ten years ago, in 2012, the French political scientist Nonna Mayer observed how Le Pen had successfully closed the male-heavy “gender gap” which characterised not just her father’s vote but support for many other populists across Europe. Unlike her father, a former paratrooper who had shown little genuine interest in “de-demonising” his party and was, at times, anti-Semitic, Marine Le Pen has made serious inroads not only among women but also LGBT communities who often perceive their hard-won rights are under threat from radical Islamism.

It is this generation, she hopes, that will continue to push her forward, irrespective of what happens next Sunday. Le Pen may not capture the Élysée Palace this time — but the question, increasingly, is when, not if.